What They're Reading in Ireland This Spring 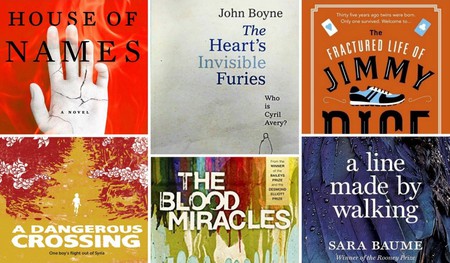 Spring 2017 will see Irish readers enjoying new books from some of the country’s most promising young talents, as well as the latest works by long-established wordsmiths such as Colm Tóibín.

A Line Made by Walking by Sara Baume (Tramp Press)

After the whirlwind success of her 2015 debut novel Spill Simmer Falter Wither – which won a host of prizes and was recently announced as a finalist for a Los Angeles Times Book Prize – expectations were always going to be high for Sara Baume’s second outing. The youthful Irish author can now breathe a sigh of relief as the February release of A Line Made by Walking was welcomed with a wave of warm reviews. Her tale about ‘the art of falling apart’ – as summed up by The Guardian – focuses on a 25-year-old woman grappling to find her place in the world.

Delighted to announce that we'll be launching Sara Baume's exceptional second novel 'A Line Made by Walking' on February 16th – please save that date in your diary for the party! Stunning jacket design thanks to @feekra PS this book is 🔥🔥🔥 #spillsimmerfalterwither #sarabaume #nofilter #irishfiction #alinemadebywalking

This May will see the highly anticipated release of the 11th novel by one of Ireland’s most accomplished writers, Colm Tóibín. An Irish PEN Award winner and author of the highly acclaimed historical novel Brooklyn, Tóibín returns this year with a book based on ancient Greek mythology, specifically the sacrifice of Iphigenia at the hands of her father, King Agamemnon. House of Names follows the murder’s effect on his wife, Clytemnestra, and the family as a whole.

Blogger, short-story writer, and novelist Lisa McInerney from Galway was called ‘arguably the most talented writer at work in Ireland today’ by The Irish Times after hitting a home run with her first novel in 2015. The Glorious Heresies, a black comedy about an unintentional murder in a disadvantaged area, won both the Baileys Women’s Prize for Fiction and the Desmond Elliott Prize last year. While the first book is being adapted into a TV series by Entourage director Julian Farino, McInerney is set to release the sequel, The Blood Miracles, in April.

So, this is The Blood Miracles, coming this April, looking like a riot, reading like . . . well. You'll have to make up your own minds on that one. I hope you'll all like it the way I like its cover (dangerously and obsessively). #coverreveal #bookcover #bookcoverdesign #cork #irishfiction #novel #bookstagram #thegloriousheresies #gloriousheresies #lisamcinerney #corkbai #april2017 #2017books

The new novel by Dublin-based author John Boyne – called ‘a substantial achievement’ by The Guardian – stormed straight onto the Irish bestsellers list upon its release early in February. Based around a character named Cyril Avery, The Heart’s Invisible Furies initially explores his difficult youth, being born to a 16-year-old mother in 1945 and spending his childhood with loveless adoptive parents. Later, it provides insight into the experience of being homosexual in the suppressive context of Catholic Ireland.

The US edition of THE HEART'S INVISIBLE FURIES will be published on August 22 by #hogarthbooks here's the jacket!#theheartsinvisiblefuries #novels #writers #irishwriters

Clonmel-born Ronan Ryan’s first novel is already being compared to the work of writers like Donal Ryan and Kevin Barry – not terrible company for an author at any point in their career. The Fractured Life of Jimmy Dice is the story of a Tipperary family – in particular, its scrappy youngest son, Jimmy – as told by his twin sister, who died during birth. The book, dubbed potentially ‘unputdownable’ by the Irish Independent, traces his coming of age alongside that of contemporary Ireland.

Before it was closed down in October of 2016, Jane Mitchell visited the Calais refugee camp nicknamed ‘The Jungle’. The Irish author of children’s fiction was working on a book called A Dangerous Crossing, about the migration experiences of real Syrian families, and wanted to meet the people at the epicentre of what has come to be seen as a global crisis. Released in February, the work, endorsed by Amnesty International, is described by fellow children’s book author Sarah Webb as ‘An important book, a necessary book, but above all, a brilliantly told story.’

Our upcoming book – out on February 23rd in bookshops – is A Dangerous Crossing by Jane Mitchell. The story of a young boy and his family fleeing Syria and searching for somewhere to call home #Syria #refugees #refugeecrisis #childrensbooks #bookstagram For readers 11+

Having featured in 2015’s The Long Gaze Back, the Irish Book Award-winning anthology of short stories by female writers from Northern Ireland, June Caldwell is set to lift the lid on her first debut story collection in May. Room Little Darker, published by New Island, promises more of the trademark flair and wit that won her a 2014 Moth Short Story Prize. That winning work, entitled Upcycle, led The Moth to declare her ‘mad as a bag of spiders and genuine talent.’