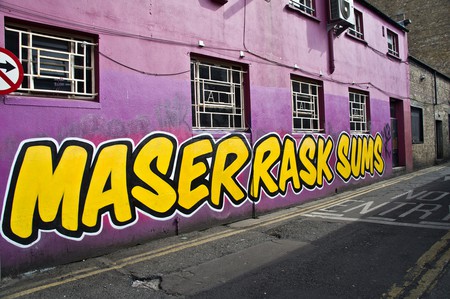 Talented Irish graffiti artist Maser began creating street art around Dublin city in 1995, quickly developing a cult following. Since then he has worked on multiple high profile projects across Europe and the US, where he is now based. Earlier this year he staged his first solo show at London’s Lazarides gallery, exhibiting new works on canvas and wood. No matter where they are located, Maser’s generally abstract designs are intended to engage and provoke thought, often having a strong message. His recent Dublin commission to create a mural in support of repealing the 8th amendment of the Irish constitution has gone on to become the official emblem of the country’s campaign for increased abortion rights. Read on to discover some of the artist’s best works.

They Are Us Project, Dublin, Ireland

A collaboration with Irish musician Damien Dempsey on the They Are Us project in 2010, they filled run down alleyways and unexpected spots throughout Dublin with inspiring graffiti. The initiative raised funds for the homeless, and saw Maser run spray-painting classes for offenders at Dublin’s Mountjoy prison.

Quite a fitting time this mural got cleaned up from 2009 in Temple Bar, Dublin. "I'd rather trust a dealer on a badly lit street corner, than a criminal in a three piece suit" #maserart #damiendempsey 📷@the93mc

U Are Alive Mural, Dublin, Ireland

The artist updated his U Are Alive mural on Camden Street with rainbow colours in support of the vote to legalise same-sex marriage in Ireland in 2015.

At the 2015 Unexpected festival in Fort Smith, Arkansas, Maser completed a mural in memory of William Darby, a US army officer who was sent to Northern Ireland at the beginning of World War II and created the elite military unit known as Darby’s Rangers. Darby was killed in action in Italy in 1945, two days before German forces surrendered there.

Darby was born in Fort Smith, Arkansas and is best known for his organization of the First Ranger Battalion during World War II. He was deployed with the 34th Infantry Division to Northern Ireland in 1942 and it was there he organized and trained his new elite commando unit which would come to be known as Darby’s Rangers. Darby was killed in combat in Italy while issuing orders to cut off a retreat of German soldiers. Relying on the inspiration of their late commander, the rangers continued their mission and all German forces in Italy eventually surrendered. Darby’s techniques were untraditional for the time period. Darby’s Rangers eventually evolved into the present day Army Rangers. #maserart @unexpectedfs @justkidsofficial

The Dancing of Light, Munich, Germany

This installation at Mixed Munich Arts nightclub was intended to convey the idea that ‘light is hope.’

Setting up for the show tonight in Munich #maserart

This temporary interactive exhibition space was created in Smithfield, Dublin as part of the Bram Stoker Festival in 2015.

Piece is complete and open to the public now and for the next few days in Smithfield Square. Great feeling to have one of my pieces in Dublin, my home. #maserart #bitemedublin @bramstokerdub

Maser created a colourful stage for the 2015 Web Summit in Dublin.

My Relationship With Colour, Dublin, Ireland

This piece was created and auctioned for the Jack & Jill Foundation, an Irish charity dedicated to helping young children with brain damage and intellectual and physical developmental problems.

"My Relationship With Colour" – a piece I created for The Jack & Jill Children’s Foundation. The Jack & Jill Children’s Foundation was set up by Jonathan Irwin and his wife Senator Mary Ann O’Brien based on their own experience of caring for their son Jack at home until he passed away in 1997 aged just 22 months. Over the past 18 years, Jack& Jill’s Children’s Foundation has supported some 2,000 children throughout Ireland (from birth to four years old) with brain damage who suffer severe trauma, as well as providing end of life care. This piece is on display in Arnott's department store from 22nd January to 29th February 2016. Visit: http://www.haresonthemarch.ie/trail.html to download a map to find all the hares and register to win prizes! To bid on the hares: https://galabid.com/auction/hares. Auction closes 21 March.

His two-story Higher Ground project at Sydney Festival 2015 focused on ‘converging architecture and geometry on a grand scale.’

As part of the year of Irish Design (ID2015), this unique bus wrap was created by Maser for Expressway intercity buses in Ireland.

Earlier this year he helped transform a basketball court in Libera as part of Apartial‘s Liberia Project.

Locals help me create an installation in Liberia @apartial #maserart

Maser has made several murals in Montreal in 2016, as part of a project called Champ Libre in collaboration with LNDMRK production company.

Last but not least, his popular Repeal the 8th mural at the Project Arts Centre in Temple Bar – which was controversially removed on the orders of the Dublin City Council – just got Maser the coveted cover of the autumn 2016 edition of the quarterly Irish Arts Review.

The cover of the Irish Arts Review. It's been a goal of mine for years to get on this and is even more special because they used this image #repealthe8th #maserart