The Best Ghost Tours in Dublin 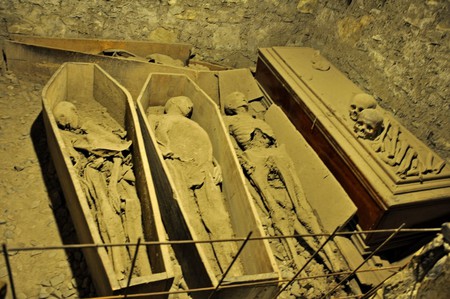 As the home of Bram Stoker (author of Dracula), and a place with plenty of its own gruesome history, taking in revolution and medieval grit, Ireland’s capital Dublin is a great place to get spooky.

So why not let yourself get swept away in the historical chaos, whether it’s in hearing the classic ghost-laden tales of the cobbled streets and ghoulish churches, or linking the history of the city to Viking violence of over a millennium ago.

All of these tours – the churches aside – occur in the evening. Most take advantage of the city’s narrow lanes, spooky architecture, and typically dingy weather to add to the atmosphere. Check out our favourite eerie offerings.

Claiming to be the world’s first ghost bus tour (perhaps a touch optimistically), the Dublin Ghost Bus is the popular tourist brand’s main nighttime explorer, and impressively inventive. The tour will take you to the vaults of Dublin Castle, with storytellers and live actors giving the journey an arguably more show-type vibe than a tour. With the windows blacked out for entertainment purposes, don’t expect to see all that much of the city other than the core destinations, but you won’t lack for stories, taking in Dubliner Bram Stoker’s Dracula, or the local ghosts and ghouls. Tales are told in that witty, punny style that’s so stereotypically Irish. You must be over 14 to take part (and probably shouldn’t be of a nervous disposition).

The tour departs from outside Dublin Bus HQ on O’Connell Street, lasts about two hours, and costs €28 per person. Daily.

Get a taste below:

Yes, Dublin does indeed have two ghost-leaning bus tours – there’s quite the spooky history. The Gravedigger Bus Tour, the more recent addition, is a little more historically informative and a little less entertainment-focused than its rival and includes a ‘ghoulish brew’ at the final stop, the Gravedigger’s Pub, which gives the tour its name. This one is only a touch less cheesy, though; it’s quite definitely more for fun than a serious history lesson. While there are some genuinely impressive sites included, such as the historic, revolution-linked Kilmainham Gaol, you’ll mainly be standing outside hearing stories rather than actually touring them. Expect a playful, slightly gruesome, quirky, colourful night out. The bus itself is pretty spooky too.

The tour departs from central College Green, lasts about two hours and costs €25 per person. Daily.

Taking its cues from ancient stories passed down through generations of Irish folklore, the Haunted History Walking Tour includes tales of cult-like activity at the Hellfire Club overlooking the city. It explores the ‘witch burning’ of Darkey Kelley in the 18th century and dabbles in the ghostly supernatural tales that simmer across the capital. This tour is certainly a more ‘serious’ look at Dublin’s more alternative history than the other offerings listed here, and it will also explore far more of the city, though perhaps lacking the curated entertainment value of the bus options. Backed by a group called Paranormal Study and Investigation Ireland, the guides pride themselves on historical accuracy and knowing all those creepy old tales.

The tour departs from the square adjacent to Dublin City Hall, lasts about 90 minutes and costs €13 per person. It typically runs three days a week.

Grab a glance in the video below:

The author of Dracula grew up in the upmarket north-side Dublin suburb of Clontarf, and the popular district now celebrates one of its most iconic sons with a spooky castle glance at his greatest creation. The cynical might see Castle Dracula as simply an elaborate haunted house, but with characters roaming the halls who seem extremely into their roles, you will learn quite a bit about Stoker’s life and art, in between the visits to Dracula’s lair and strolling the gothic-themed, dimly lit tunnels. Movie buffs are likely to be particularly impressed.

Get a taste from the reviews below:

Both of these tourist-leaning churches offer tours, though you can just pay to enter yourself and explore the buildings both dating back to the 11th century. Why come here? Apart from the rugged beauty of the ageing buildings themselves, both contain mummies. St Michan’s isn’t all that impressive from the outside, but once you hit the basement, you’ll find the open coffins of 18th-century rebels, the creepy death mask of Wolfe Tone, and ancient furniture that prompts shivers in its own right. Christchurch is the more impressive building, but not so loaded in ancient dinginess. It is home, however, to the mummified bodies of a cat and a rat, the former of which chased the latter down an organ pipe centuries ago, never to emerge.