The 10 Irish Craft Breweries Every Beer Lover Should Try

If there’s one thing the Irish do well, it’s brewing a good pint. While Guinness and Beamish remain big names within the brewing industry, there is a large increase in the number of independent craft breweries in Ireland. What’s more, these breweries are bringing unique flavors and personalities to the market. Here is a list of 10 Irish craft beers that every beer connoisseur should try in the north and south of the country. 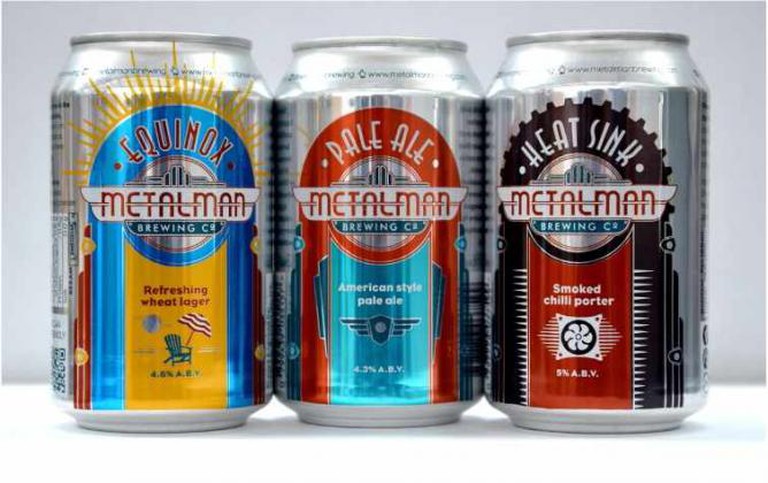 Metalman Brewing Co., Waterford City | © Metalman Brewing Company
A dream brought to life by a few beer enthusiasts, Metalman Brewing Company has put Waterford on the craft beer map in Ireland. Frustrated by the lack of authentic and flavorful Irish craft beers on the market, Grainne Walsh and Tim Barber decided to put their plan into action, and in 2011, their first beer, Metalman Pale Ale, was launched. Since then, Metalman has created a number of seasonal beers such as Equinox and Heatsink. The name of the brewery comes from the navigational aid located on the Waterford coastline. The Metalman statue was erected in 1823 following the running aground of the Sea Horse. The Metalman therefore became a safety beacon and an iconic feature on the Waterford coast. With the success of the brewery so far, Metalman Brewing Company is set to become an icon in Waterford, too.
Open In Google Maps
Unit 14, Tycor Business Centre Tycor Waterford City, County Waterford, X91 HP89, Ireland
+35351348448
Visit Website
Give us feedback

Also known as O’Hara’s Brewery, the Carlow Brewing Company established itself during the first wave of independent microbreweries to pop up in Ireland. Restoring the traditions that had been a part of Carlow during the 18th century, O’Hara’s Brewery makes use of Carlow’s arable land and ability to grow high quality malt. Their resulting beers are made with only four ingredients: water, malt, hops and yeast. They have a wide range of beers, stouts, lagers and ales, all of which are award-winning. Paying a visit to the Brewery in Carlow, visitors can have a brewery tour, which reveals the history of the O’Hara brewery, as well as the history of Ireland’s craft beer industry. When the O’Hara’s are not brewing their ales and beers in Carlow, they are running the Irish Craft Beer and Cider Festival in Dublin in the RDS. An annual event, it was co-founded by Seamus O’Hara, and now features over 20 breweries and 150 different kinds of beer.

A long established part of Cork city, the Franscican Well Brewery is built on the site of an old Franciscan Monastery and Well, which dates back to the year 1219; the Franscican Well Brewery has been brewing up a storm since it opened. Legend also has it that the water from the old well has miraculous properties, and people used to travel miles to consume it. Combining traditional brewing techniques with modern technology, the Franciscan Well produces natural beers, stouts, lagers and ales that are free of chemicals and preservatives. Their popular brews include Rebel Red, which is a truly Cork red ale, Blarney Blonde, which is a lighter ale, and Shandon Stout, a full-bodied, dry stout. Their brewing vessels are also a feature of their brewpub, where beer drinkers can enjoy their pint while watching it being created. The Franciscan Well also hosts an annual Easter Beer Fest, which is a popular event in Cork.

Over in Galway, the Galway Bay Brewery has been reviving the age-old brewing techniques of their area to produce beers that are full of body and flavor. Each of their beers is created by a hands-on and complicated brewing process that gives Galway Bay Brewery their unique taste. The brewery also provides tours of their operation and talks on the ancient craft of brewing in Ireland. Established by Galway natives Jason O’Connell and Niall Walsh, the Galway Bay Brewery has created recent favorites among the Irish beer community. Try their Full Sail beer, their red Bay Ale, and their chocolate milk stout Buried at Sea. The brewery also operates a number of pubs including The Oslo, Galway’s first microbrewery, and The Salthouse, which overlooks the Claddagh. 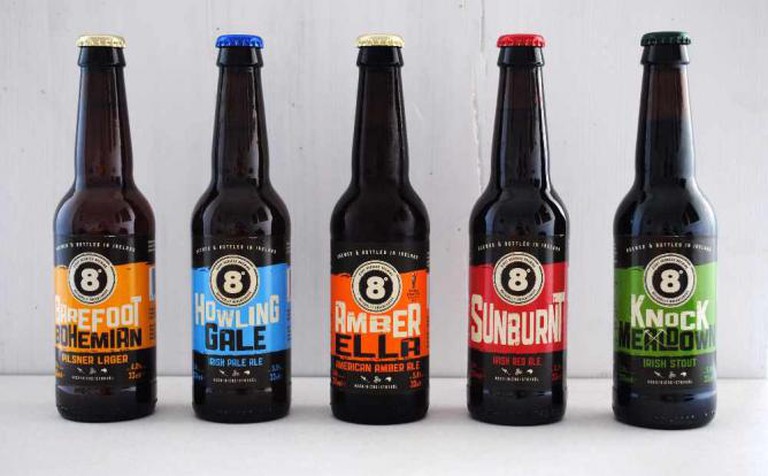 Located in the village of Ballinlough in rural Roscommon, Black Donkey Brewing has been growing from strength to strength. The brewery is owned and run by husband and wife team Richard Siberry and Michaela Dillon, two Irish expats who returned home to Ireland from New York after twenty years, and who mix brewing influences from Ireland, Europe and America to create their eccentric and tantalizing beers. Aiming to provide a diverse range of beers that are wood aged or with smoked malts, Black Donkey Brewing is not afraid to experiment. Popular beers by the brewery include their Buck It Amber Ale and their funky golden saison Sheep Stealer Irish Farmhouse Ale, which won silver in the Belgian Style Ale category at the Killarney Beerfest competition.

Created by three friends Thomas Prior, Stephen Clinch and Paul O Connor, Trouble Brewing strives to bring a variety of craft beers and ales to Kildare and the rest of Ireland. Trouble Brewing produces great tasting beverages with a sense of humor. Launching their first batch of beer Deception Golden Ale in 2010, five years later Trouble Brewing has created a wide range of drinks, such as the Dark Arts Porter and the Sabotage India Pale Ale. Due to their growing popularity, Trouble Brewing began bottling their beers in 2012, meaning their great taste could be enjoyed at home too.

The Blacks of Kinsale, otherwise known as Sam and Maudeline Black, are a husband and wife duo who set up their own craft brewery in Kinsale in 2013. The notion to do so stemmed from a Valentine’s Day gift Maudeline gave Sam many years ago: a beer making kit. Thus an obsession with beer production was born. Starting out brewing small batches in the Eight Degrees Brewery, the duo began creating beers with passion and personality, which has resulted in Blacks of Kinsale growing in its number of followers. Must-try beers from the brewery include the Kinsale Pale Ale made from Citra and Cascade hops, Model T Stout and High Viz Double IPA. Since that first glass of beer, Blacks of Kinsale have won awards for their drinks, such as Silver for High Viz, Silver for our Black IPA and a Bronze for Rocketship at the Alltech Craft Brews and Food Fair. 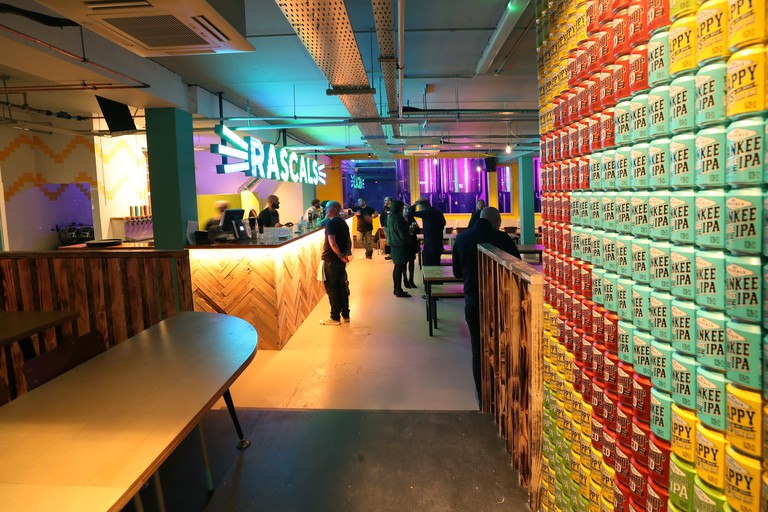 Rascals was founded in 2014 | © Rascals Dublin
Owned by craft beer loving Emma Devlin and Cathal O’Donoghue, Rascals Brewing Company is quickly becoming a household name in Dublin and Ireland for their charismatic beers. Their love of beer began in Wellington, New Zealand, where the couple lived in 2009. They began creating their own brews, and following the success of winning two brewing competitions in 2013, the pair decided to open their own 950 liter microbrewery. Exciting beers produced by the company include their Ginger Porter brewed with fresh root ginger, which won a bronze medal at the Alltech International Beer Convention 2014, their Big Hop Red ale which won the Fan Favorite Award in the Red/Amber/Brown Category at the All-Ireland Irish Craft Beer Festival 2014, and their seasonal lemon saison Kim Jong Lem-Un which was the National Homebrew Club Summer Session Competition Winner. With so many awards for their beer creations, Rascals Brewing Company is a place to watch.
Open In Google Maps
Tyrconnell Road, Inchicore, Dublin 8, County Dublin, D08 HF68, Ireland
+35315382051
Visit Website
Give us feedback

Brewery
Facebook
Email
Twitter
Pinterest
Copy link
Share
Map View
Founding the first brewery in Sligo in fifty years, James Ward opened The White Hag, taking the name from Irish Mythology. According to legend, The White Hag was a witch and a spiritual force of nature, who was one of three hags who lived in a cave in the side of Keash Corann. Working in craft beer distribution in America, James Ward decided to develop an authentic Irish beer to satisfy the demand in the US market. Returning to Sligo, James opened his brewery and is quickly establishing himself as an innovative and intriguing beer producer in Ireland as well as the US. The beers are created by Master Brewer Joe Kearns, and have revived the brewing tradition in Sligo, with must-taste beers such as their Black Boar stout, Ireland’s only Heather Ale, their Irish Bog Ale made from peat and their Imperial Oatmeal Stout that packs a punch at 10.2%.
Open In Google Maps
Ballymote, Ballymote, County Sligo, Ireland
+353858722989
Visit Website
Give us feedback
Give us feedback