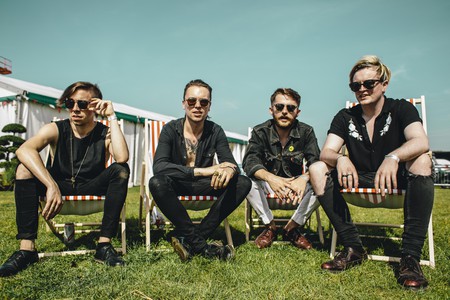 Much like the Grammys or the Brits, Ireland has an annual music prize. In the case of the Emerald Isle, it’s called the Choice Music Prize, and awarded for the best album released by an Irish act in the previous year. 2018’s prize, then, which will be awarded for an album released in 2017, and sees critics from Irish music publications, radio stations and newspapers debate and then vote on the best release of the year while the contestants play a popular accompanying live show.

Choice has been running since 2005, and is awarded at an annual televised ceremony in Dublin, with the winner collected in a cheque for €10,000. There’s also an award for the best single of the past year, though that one isn’t selected by the panel of critics, but by popular vote. Past winners of the main album prize include acts that have achieved notable international acclaim (like Two Door Cinema Club, The Divine Comedy and Villagers), and acts that are yet to really break out of Ireland (like SOAK, Super Extra Bonus Party and last year’s excellent outsider winners, Irish hip-hop pioneers Rusangano Family).

The 2017 selection is a great sample of the state of play of modern Irish music, touching on pop, indie, dance and trad music along the way, but has two glaring omissions when it comes to Irish albums released last year. Irish acts U2 (from Dublin), who released their latest Song of Experience in December, and former One Direction man Niall Horan (from Mullingar), who released Flicker in October, are both conspicuous in their absences.

The implication, of course, is that the group of critics consider 10 other Irish acts to be ahead of the two big names in terms of album quality, and we’d humbly suggest they’re right. Here, then, is a quick lowdown on the acts and albums getting more local love than Ireland’s international big guns.

(Disclaimer: the author is a former judge of the Choice Music Prize, but not involved this year.)

Come On Live Long – In The Still (self-released)

The second album from this band of spacey, panoramic-sounding Dubliners deals in soft electronic pop with gentle harmonised vocals. There are hints of loosely R&B rhythms thrown in for good measure, resulting ins an album of depth and exploration, a touch short on catchy singles (it goes with atmosphere instead), but heavy on weighty melody.

One of two acts to make the cut from an increasingly impressive Cork music scene, Marlene Enright is perhaps the most leftfield nominee to make the cut, a popular emerging artist with a gorgeous, poetic, quirky debut album. Placemats and Second Cuts showcases a distinctive vocal applied to rootsy indie-pop.

A fiery pop-rock debut that takes its cues from anything from grunge to metal, Fangclub might be on a major label, but their 2017 debut album success came a little out of the blue. The eponymous release showcases a boisterous live show and feral, direct sound. One for the headbangers.

Formerly known as Lynched (they changed their name when the band started getting international acclaim, due to its association with racism in the US – it was taken from the frontman’s surname), Lankum are perhaps the act on this list you’d most associate with the Irish music of old. The album is built on 16 years of exchanging dusty trad session tapes and listening to rustic archives, but the folk-trad output is brilliantly polished and bitter. Music for the bookish rebel soul.

An absolute darling of the Irish indie scene, James Vincent McMorrow’s second album in a period of just a few months saw him pour his heart out in a nuanced, textured haze of emotional melodic genius. Launched at short notice on an unsuspecting public, True Care won plenty of Irish hearts in 2017, and goes in as one of the Choice favourites.

New Jackson – From Night to Night (All City)

A new moniker for a long-established Dublin club icon in David Kitt, the New Jackson project is a beat-heavy, jazz-inspired album laden with transparent and gutsy house beats. That in itself is a little unusual in a very much band-driven Irish music scene, and Kitt is excellent at it, writing tight beats and overlaying enchanting vocals.

Otherkin forged their ever-growing reputation in the live arena, where their accessible and pulsating pop-rock glistens with sweaty energy and sends audiences sprawling. Their ear for a hook and rampaging stage show is as intelligent as it is essential, the product, perhaps, of two members of the band laying aside medical degrees to do this instead. The video shows (in part) Otherkin supporting Guns N’ Roses at Ireland’s biggest gig of the summer, in Slane.

Fionn Regan – The Meetings of the Waters (Abbey Records)

Something of an unheralded (at least internationally) Irish icon, Fionn Regan – hailing from the seaside town of Bray – is your classic folk troubadour. He’s arty, unconventional, lyrically poetic and bizarre, and capable of pulling elaborate and wonderful melodies out of the hat as he ruminates on life and Ireland. A bit of an acquired taste? Possibly, but if you get him, you’ll absolutely love him.

A critic-favourite that hasn’t quite broken into the mainstream consciousness just yet, influential Dublin blogger Nialler9 has a lot of love for Ships, a textured, largely DIY duo whose music seems absolutely riddled with subtle detail. This is an album to listen to on a high-end, surround-sound stereo and just soak up with a glass of wine. Think epic vocals and plenty of drama.

Long a respected melodic alt-rock act, Talos have really come of age in the last year, doubling up on drummers, blending in a mix of instrumentation, and becoming a really compelling live act. Wild Alee is the product of this great chunk of progress: subtle weaving melody and awesome, dramatic textures.