The 10 Best Places To Get Doughnuts In Dublin 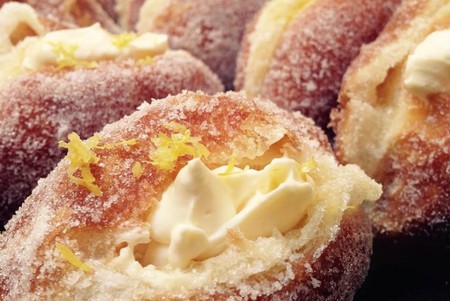 The doughnut craze in Dublin is still going strong, with some of the city’s best-loved doughnut shops expanding into second and third stores, and even more cafés getting in on the doughnut circular-confection action. If you haven’t already got a favourite, here are the ten best places to get yourself a doughnut in Dublin.

Hilary Quinn’s Dublin Doughnut Company has to be at the top of the list, as her light and fluffy doughnuts – always freshly baked the morning you buy them – are unrivalled by any other Dublin doughnut in the taste department. Trained at Cork’s world-renowned Ballymaloe House under their head pastry chef, JR Ryall, Quinn worked in St. John Bread and Wine in London before setting up her own doughnut enterprise in Ireland. She drops off batches of Kinder Bueno, chai caramel and crème brûlée flavoured doughnuts (to name but a few) to several cafés in the city on Thursdays, Fridays and Saturdays. Pick them up at Vice Coffee Inc on Abbey Street.

Grocery Store, Bakery, Dessert, Pastries, Fast Food, Street Food
Facebook
Email
Twitter
Pinterest
Copy link
Share
The Rolling Donut only opened their first Dublin store this summer (2016), but they are already expanding from the quay at Bachelor’s Walk to the south side of the Liffey River with another. Established in 1978 by Michael Quinlan, this family-run artisan bakery is now managed by him and his two daughters. Having grown from a concession stand at public events to an O’Connell Street kiosk to a multi-store chain, the Quinlan’s are clearly doing something right with their handcrafted sourdough doughnuts. Must-try flavour: Pistachio salted caramel

Shop
Facebook
Email
Twitter
Pinterest
Copy link
Share
Aungier Danger was named for its original location on Dublin’s Aungier Street, but they have recently found a second home in Arnotts department store, and on October 14, 2016, they opened another outlet of the same name on George’s Street. The newest shop is already causing the same kind of hysteria as the first one did when it opened in 2015, with hordes of dedicated doughnut lovers queueing in the rain to try and get their hands on a limited edition flavour, specially created for the opening day. Must-try flavour: Oreo marshmallow

Bakery, Dessert
Facebook
Email
Twitter
Pinterest
Copy link
Share
Doughnuts from Revolution Bakery can be found in the 3fE café in the Docklands on Fridays, and it’s worth venturing a little off the usual city centre track to find them. Made with only natural ingredients and using slow fermented dough, their creations are intended as a direct challenge to the mass-produced, low-quality doughnut that was the standard until relatively recently. Their hope is to bring about a ‘revolution’ in the world of the doughnut. Must-try flavour: Classic jam

Close to Aungier Danger on Aungier Street, Krüst Bakery is the world’s first ‘smart café’, allowing customers to charge their phones wirelessly, order via smartphone and collect points with digital loyalty cards. They also use a smart thermostat to monitor their energy consumption and cut out unnecessary waste. As well as being admirably smart, Krüst is also just incredibly tasty. Doughnuts are a speciality, and they’ve perfected the cronut too – a cross between a doughnut and croissant that originated in the Dominique Ansel Bakery in New York.

Red is the new Black!! Unnamed customer: "I tried the new Cronut and I gotta say not only does it look pretty it taste marvelous. It's a warning if you take one bite you will be tempted to finish it all😈" #truestorybro #redvelvet #cronuts #foodlove #instagood #zomato #yelp #goodFood #followme #tbt #photooftheday #instadaily #food #like4like #picoftheday #foodporn #foodpicsbruh #desserts #foodbloggers

Bakery, Dessert, Pastries, Street Food, Fast Food, Vegetarian, $$$
Facebook
Email
Twitter
Pinterest
Copy link
Share
As all this doughnut mania began taking place in Dublin, one category of people was categorically left out in the cold – vegans. Enter Antoinette’s Bakery, who have come to the rescue with their selection of sweet treats that are wheat-free, gluten-free and vegan-friendly. They make pretty vegan doughnuts that look just as tempting as the milk- and egg-filled versions, in cinnamon, chocolate, coffee and vanilla flavours. Must-try flavour: Cinnamon sugar

Bakery, Dessert, Pastries, Coffee, Street Food, Fast Food, $$$
Facebook
Email
Twitter
Pinterest
Copy link
Share
Offbeat Donut Co are one of the most recent entrants to the Dublin doughnut market, having taken up residence in Pearse Street train station earlier in 2016. Theirs are made fresh on-site and are among the most colourful to be found in the city, offering customisation options. This fresh new outfit has a sense of fun about it, from their website with the Oscar Wilde quote ‘The optimist sees the doughnut, the pessimist sees the hole’ to their ‘smiley donut’ emblazoned with a smiley face. Must-try flavour: Caramel toffee ring

A SLICE of Cake Café

Cafe, Restaurant, Irish, Dessert, Coffee, Tea , European, Vegan, Vegetarian, Street Food, $$$
Facebook
Email
Twitter
Pinterest
Copy link
Share
A sister to The Cake Café on Camden Street, Slice in Stoneybatter can be relied on for high-quality baking, and their doughnuts are no exception. Having captured Dubliners’ imaginations with their doughnuts inspired by ice cream flavours over the summer, the café has now moved on to chocolate bars, creating Toffee Crisp, Snickers and Bounty flavoured doughnuts. These limited edition doughnuts are only sold on Thursdays, with a new flavour coming every week. They’ve even started their own hashtag for the initiative: #durtydonutthursday. Must-try flavour: The flavours are always a surprise, but this week’s Ferrero Rocher flavour sounded pretty amazing.

The trendy Woollen Mills café by the Ha’penny Bridge is probably better known for its lunch menu and slick interior design by Designgoat than for its doughnuts, but the flavours here are some of the most inventive. Experimenting with flavours like gooseberry jam, honeycomb and lavender, and rhubarb and custard, Chef Lelek Kozodój has even come up with an ‘Elvis’ doughnut, consisting of banana, peanut butter and bacon.

Bray-based doughnut makers Treasured Sugar don’t have a permanent home yet, but their tempting offerings can be ordered in boxes of a half dozen. Catering for events such as birthday parties and coffee mornings, they create custom designs like doughnut letters spelling out ‘Happy Birthday’, and even invented their own Pokeball doughnuts. They also have their own standard flavours like cookie butter caramel or peach and mango.

I wanna be the very best like no one ever was! Gonna catch 'em all! #pokeball #pokemondonut #treasuredsugar