An Irish beauty pageant? What is the Rose of Tralee? 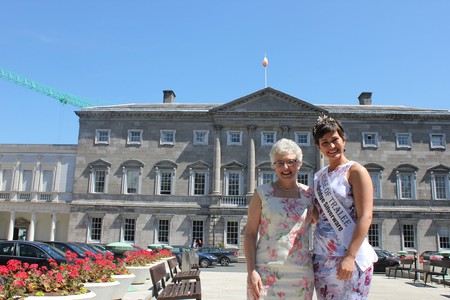 Every August, the town of Tralee in Ireland‘s southwestern county of Kerry comes alive. While other corners of the country have more conventional summertime activities – from music festivals to horse racing, hiking to markets – the Tralee event sees women representing Ireland and its expansive international diaspora compete for the title of ‘Rose of Tralee‘, an ambassadorial role that lasts a year. The competition has been likened to beauty pageants and it’s a little more complicated than that, but only a little…

So, what is the Rose of Tralee?

For various economic and social reasons, the majority of Ireland’s history has seen much emigration. That means that while only six million people live in Ireland (which encompasses both the Republic of Ireland, an independent country, and Northern Ireland, a controversial part of Britain), an estimated 70 million people around the world claim Irish descent. The Rose of Tralee in its modern incarnation very much draws on that idea, with both the counties of Ireland and various regions around the world picking a representative to attend the annual event (originally reserved only for locals). There are (for example), the Boston Rose, the Tyrone Rose, and the London Rose for the year.

The ‘Roses’ then compete in a contest that organisers go to great lengths to assure us isn’t a beauty pageant (they call it a ‘celebration of women’), but it has many similarities, with almost all the women being young and conventionally attractive. The contest also has ‘escorts’ for the Roses. It’s a bit of a throwback, though these days it comes with an almighty party attached. The key moments are shown on Irish national television.

What are the criteria for competing and winning?

The entrance criteria has been somewhat controversial. Women only qualify to be a Rose between the ages of 18 and 28. They must not, and must never have been married, and until recently, couldn’t be unmarried mothers, either. The contest has been going for 55 years, and theoretically, the winner is judged by the woman who most closely matches the description of ‘Mary’ in the old ballad ‘The Rose of Tralee’. We’ll let you decide what you make of that – you can hear the track below.

In practice, that’s done through a panel, who decide which Rose has the personality and suitability to serve in the ambassadorial role. This includes a talent portion, which varies from reading a poem to far more extravagant offerings, via some rather clichéd Irish dancing and fiddle-playing. The organisers sum it up as a look at “aspirations, ambitions, intellect, social responsibility and Irish heritage”.

After several days of judging, the Rose is crowned, and begins fulfilling various ambassadorial roles, appearing at events for the coming year. More Roses to date have been based outside of Ireland than inside (the US and the UK have the most wins, but there have also been titles for Luxembourg and Italy). As far as the talents go, contestants have moved on to a large extent from traditional talents, such as folk singing or playing instruments, to more cultural offerings such as interpretative dance and pop songs.

The contest has become lightly politicised in recent years, with the traditional event making the news for one winner’s vocal support of gay marriage, and another contestant speaking out against Ireland’s controversial abortion laws, prompting the presenter to tell journalists that he doesn’t feel it’s the appropriate forum.

Still, it keeps things relevant, though in much of Ireland, these progressive ideas – particularly the former – are hardly considered revolutionary. Talking politics is still considered bad form, however: most of the discussions between the women and presenter of The Rose of Tralee (currently Daithi O’Se) are almost banal. Typical topics include tea, the inspiration gifted by parents, relationship to Irish heritage, Irish sport, avoiding the temptations of alcohol (as if!), and occasionally religion.

Mary O’Connor, the Rose referenced in the song, by the way, is thought to be the poor Catholic servant beloved of the son of her Protestant owner. History is everywhere…

It’s the subject of quite substantial parody, then?

You’re getting the Irish humour already! Most people in Ireland don’t take the Rose particularly seriously at all, though there’s no question some very much do. If you want to join in the fun, just track down some of the comic corners of Irish Twitter when the Rose comes around each year. The most famous (and probably the best) parody of the whole thing, though, was produced by the priest-based comedy Father Ted, which included a ‘Lovely Girls Contest’ in one of its episodes. Naturally, it’s way more ridiculous than the real thing (see below).

But all this is nevertheless powerfully popular: viewing figures always peak at in excess of half a million, and are often nearer the million mark. In other words, 10-20% of the country actually settle in to watch this stuff year on year. James Brown even headlined the event in 1999. So even today, it’s right at the heart of Irish culture.

Here’s a little glance at that Father Ted clip, because you know you need it…