An Introduction To The Irish Language In 6 Idioms 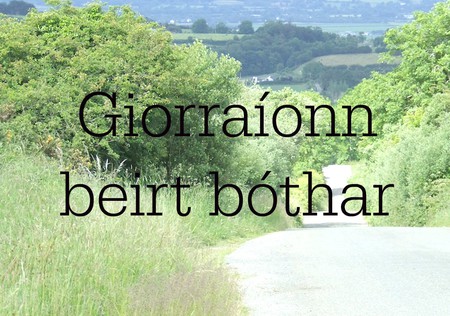 Like idioms in most other languages, Irish seanfhocail – or proverbs – are generally clever and concise. Though intended to impart sage wisdom with minimal embellishment, they are often beautifully constructed, with a sing-song phonetic quality. Read on to discover some famous seanfhocail and learn their true meanings.

As the word ‘bóthar’ in Irish means road and the verb ‘éirigh‘ means to rise, this phrase is widely – incorrectly – translated as ‘May the road rise to greet you,’ but it actually means ‘May the road be successful with you’. It is used to wish someone success on a journey, both literal and metaphorical. When the award-winning Irish MMA fighter Conor McGregor was preparing to face rival Chad Mendes in Las Vegas, U2 posted the below photo featuring the famous Irish proverb on Instagram to wish him luck.

In another metaphorical use of the word ‘bóthar’, the literal translation here is ‘Two people shorten a road’, suggesting that having company makes a long journey pass more quickly. The Irish use this idiom to explain that companionship makes life better, and to engender solidarity. It has been referenced by people like the former Irish President Mary McAleese in speeches on religious harmony, as well as being adopted by the Irish suicide prevention charity Pieta House, when speaking about their popular annual ‘Darkness Into Light’ fundraising walk at sunrise.

‘Ar scáth a chéile a mhaireann na daoine.’ Meaning: We live protected under each other’s shadow

In the same way as the previous phrase, this one expresses the importance of belonging to a community – it is often equated with the English saying ‘No man is an island.’ The proverb is still popular, and just this month Roscommon artist Joe Caslin – creator of giant murals as part of the Irish Yes Equality campaign for gay marriage in 2015 – created a seven storey artwork entitled ‘Ar scáth a chéile a mhaireann na daoine’ on an abandoned hotel in Waterford city. A collaboration with the A Lust For Life wellbeing movement, the mural is aimed at promoting awareness of the importance of mental as well as physical health.

| W A T E R F O R D | At scáth a chéile a mhaireann na daoine – We live protected under each other's shadow A collaborative project with @a_lust_for_life @waterfordwalls & @pieta.house 🎥 by @petergrogan

This phrase is meant to encourage the use of the Irish language, whatever level of skill the speaker may possess, and no doubt came into being when Irish became a minority language under British rule. Teaching Irish was prohibited in primary schools until 1871, putting the language in danger of becoming extinct and necessitating the Gaelic Revival movement that came at the end of the 18th century. When US President Barack Obama visited Ireland in 2011, he referenced this phrase in his speech at Dublin’s College Green, before speaking as Gaeilge (in Irish).

‘Níl aon tinteán mar do thinteán féin’ Meaning: There’s no hearth like your own hearth

One of the best known Irish proverbs, this one literally means ‘There’s no hearth like your own hearth’, expressing the sentiment that there is no place as welcoming as your own home. In 2013, visual artist Angie Duignan connected the phrase with its English equivalent – ‘There’s no place like home’ – in a project dedicated to remembering the stories of missing women globally. The film shows six pairs of shoes – each representing a missing female who disappeared between 1993-1998 in Ireland – coming to life and clicking their heels together, Wizard of Oz-style.

‘Mol an óige agus tiocfaidh sí.’ Meaning: Praise the young and they will flourish

Part idiom and part parenting advice, this old Irish idiom advocates positive reinforcement over threats or violence, urging parents and older role models to encourage children rather than putting them down. Today used by many schools as a motto, it is thought to possibly be a reaction to the biblical proverb, ‘He who withholds his rod hates his son, But he who loves him disciplines him diligently.’