A History Of The Book Of Kells In 1 Minute 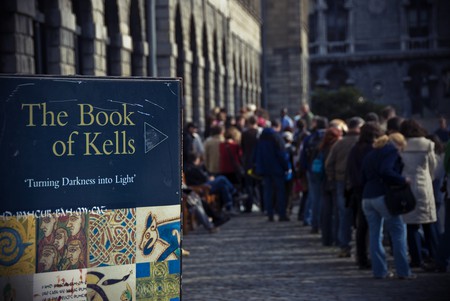 Generally referred to as Ireland’s finest national treasure, the Book of Kells is a richly decorated ancient manuscript containing the four Gospels of the Christian scriptures in Latin. Although it was kept at the Abbey of Kells monastery in County Meath for much of the late medieval and early modern periods, the exact origins of the manuscript are still not known for certain.

The Abbey of Kells

Saint Columba – one of Ireland’s three chief Saints – founded the Abbey of Kells around 554. For a time, it was believed that the Book of Kells may have been produced there during his lifetime, maybe even by the Saint himself. However, modern dating methods have since put the actual date of its creation as being much later, around the year 800.

In the early 9th century, the Abbey of Kells became a refuge for Columban monks from the island of Iona – off Scotland – when Viking raids on the abbey Saint Columba had founded there became frequent. For this reason, many scholars now think that the book was either begun in the scriptorium at Iona and worked on further at Kells or entirely created on Iona. Others believe it could have been designed at The Holy Island of Lindisfarne in Northumberland, England, or at Pictland in eastern Scotland, prior to being brought to Kells. 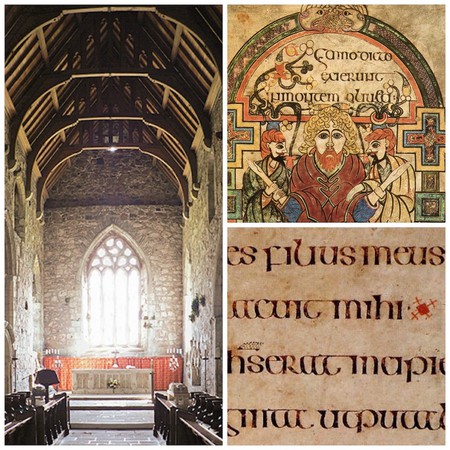 Whatever its initial origins, the Book of Kells was never fully finished. Today, 340 vellum folios remain, some featuring sketched outlines of patterns that were never completed. It is thought that three artists worked on the book’s most lavishly decorated pages, while four major scribes were responsible for the text. With its full pages of complex miniature illustrations and spectacularly embellished initials, what was completed is widely regarded as being the best example of the illuminated manuscripts produced in the British Isles during the post-Roman period.

The Book of Kells survived repeated Viking raids on Kells Abbey throughout the 10th century. The Annals of Ulster – historical records of medieval Ireland – also mention that ‘the great Gospel of Columkille, (Columba), the chief relic of the Western World’ was stolen in 1006 and found again a few months later.

The Journey to Trinity College Dublin

The Book of Kells was kept at the Abbey even after it was dissolved in the 12th century and turned into a parish church – until Oliver Cromwell’s army were stationed in Kells in 1654. The book was then sent to Dublin for safekeeping and later presented to Trinity College in 1661, where it has remained ever since. In 2011, Meath residents called for the ancient manuscript to be returned to its ‘natural and spiritual’ home of Kells, but the university refused the request.