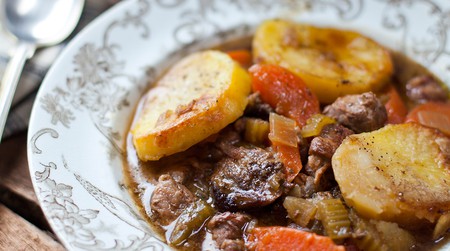 Though now considered a comfort food, stews were once a meal of necessity, whose popularity grew out of social conditions that were anything but comfortable. Here is a look back at the history of one of Ireland’s most famous traditional dishes, and learn how Irish stew came to be so ubiquitous.

The Arrival of the Potato

Having made the trip from South America to Europe as a staple food on sailor’s expeditions, the potato was first brought to western Ireland in the 16th century, where it thrived and went on to become a major part of the diet of the country’s poor. Though the potato crop proved vulnerable a number of times throughout Irish history, most notably during the Great Famine of the 19th century, many traditional Irish dishes that have remained popular still have potatoes as a central ingredient.

Recipes based on the stewing method of cooking have been traced back as far as the days of the Roman Empire and Apicius de re Coquinaria, thought to be the oldest known cookbook in existence. Though the Romans had long outgrown it by then, stewing came to prominence in Ireland during the early 19th century, during a period of economic turmoil that led to mass poverty. With only a hanging pot, an open fire and a few fairly easily attainable ingredients, even poor families were able to survive on Irish stew. 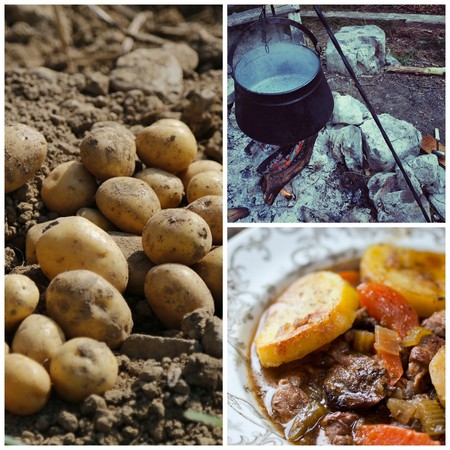 Although modern Irish stew is generally made with beef or lamb, early versions were usually made with mutton, as it was more widely available. Food historian Alan Davidson also stated that mutton was so commonly used for stew because sheep were kept into old age for their wool and milk at the time, meaning the meat was so tough that subjecting it to slow, extended periods of stewing was one of the only ways to make it edible. Generally, the meat used was on the bone, from the neck or shank, as this was thought to add more flavour. Other than mutton, Irish stew was originally made with as little as two additional ingredients – onions and potatoes. Luckier families may have been able to use goat or lamb, and add more root vegetables, like carrots, turnips or parsnips.

Where to Try It

The Irish stews of today may often be made with different types of meat and with Guinness stout as an added ingredient, but the central elements of the recipe remain unchanged, and it is still one of the country’s best-loved dishes. Dublin’s many pubs serve some of the best Irish stew in the city. Both The Brazen Head and O’Neills Bar & Restaurant offer two versions – a traditional recipe (with lamb) and another made with beef and Guinness.