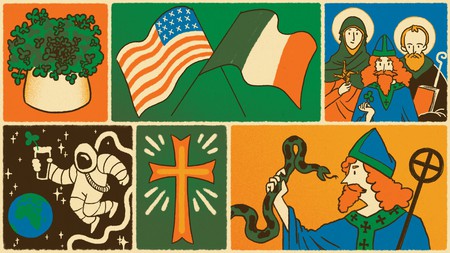 There’s far more to discover about Saint Patrick’s Day than green paint and Guinness. Culture Trip takes a look at the more surprising facts about 17 March.

Saint Patrick’s Day celebrations, which take place on 17 March, will be greatly curtailed in 2020 owing to the Covid-19 outbreak, with many parades cancelled and others choosing to avoid congregate in large groups. Strangely, this global event is still poorly understood. From the ‘rule’ of staying sober to the story of Ireland’s patron saint sending snakes packing from the isle, there’s plenty that’s known – and plenty that has been lost to myth-making – about this bold, brash day of celebration.

Although he is the island’s best-known patron saint, Saint Patrick wasn’t actually from Ireland. Born around 385 AD in Roman Britain, he was kidnapped by a band of Irish pirates at the age of 16 and brought to Ireland as a slave. Patrick later escaped back to England, but according to The Confession of Saint Patrick, he had a vision in which he was urged to return to the Irish as a missionary.

The colour green has become a key part of celebrating Saint Patrick’s Day. The city of Chicago dyes an entire river green to honour the day, while in Dublin, green lights illuminate historic buildings. However, it’s been pointed out that the colour originally associated with Saint Patrick was blue – there’s even a shade officially known as Saint Patrick’s Blue. Green became more strongly associated with Ireland during the country’s struggle for independence.

He didn’t banish any snakes

According to legend, Saint Patrick is the reason that there are no snakes in Ireland, having banished them into the sea. Although it’s a good story, Irish fossil experts have unfortunately confirmed that there were never any snakes on the isle in the first place. According to them, it’s likely that the snakes wouldn’t have been able to abide ancient Ireland’s climate – much as most Irish people fear when the wind turns bitter. It’s widely believed that this legend is a metaphor for Patrick driving out pagan druids when he established Christianity in the country.

Pubs used to be closed on Saint Patrick’s Day

It’s difficult to imagine now, but there was a time when all the pubs in Ireland were closed on Saint Patrick’s Day by law. The legal requirement was introduced by James O’Mara, the same politician who introduced the Bank Holiday (Ireland) Act of 1903, first making the day into a national holiday in Ireland. Originally meant as a mark of religious respect, it wasn’t until the 1970s that this was repealed, and revellers could raise a glass to Saint Patrick.

It’s a holy day of obligation for Catholics

Saint Patrick’s Day is also a holy day of obligation for members of the Roman Catholic Church, meaning they are supposed to attend mass at some point during the day. Traditionally, these holy feast days were intended to be spent in reflection and prayer, and definitely not in the pub – alas, times change.

But it’s a break from Lent

Having a feast day in the middle of Lent isn’t ideal, given that fasting is the cornerstone of the Lenten schedule. Thankfully, Catholics have traditionally been given a reprieve on Saint Patrick’s Day. In years where the feast day falls on a Friday, Catholic leaders in the US have given permission for any particularly stringent fasters (who are not meant to eat meat on a Friday) to partake in the traditional American Saint Patrick’s Day meal of corned beef and cabbage.

It turns out Saint Patrick’s Day parades are as Irish as the man himself, with the first parade allegedly taking place in New York City, not Ireland. It was held in the 1760s and organised by Irish soldiers in the British Army. (Several other cities, including Boston, lay claim to having held America’s first Saint Patrick’s Day parades). Ireland’s first parades didn’t happen until 1903, in Waterford: the year James O’Mara’s bill passed and created the official national holiday.

It’s widely believed that Saint Patrick used the three-leaved shamrock (not to be confused with the four-leaf clover) to describe the Holy Trinity of the Father, Son and Holy Spirit. However, there’s no written mention of his having done so until as late as the 1600s, and it’s thought to be a myth. Wearing a shamrock on your lapel – and later ‘drowning’ it in a beverage – became a Saint Patrick’s Day tradition at the end of the 17th century. The shamrock later became a national emblem during Ireland’s fight for independence.

The tradition of Irish government leaders presenting the US President with a bowl of shamrocks at the White House on Saint Patrick’s Day goes back to the 1950s. However, it’s only recently come to light where all of these shamrocks go after the ceremony. In 2010, a CNN story revealed that ‘any food, drink or plant presented to the President has to be handled pursuant to Secret Service policy’ – or, in layman’s terms, destroyed.

It’s even celebrated in outer space

Saint Patrick’s Day is celebrated in countries across the globe, and even in lower orbit. It’s been marked several times on NASA’s International Space Station; astronaut Chris Hadfield filmed himself singing ‘Danny Boy’ on Saint Patrick’s Day 2013, and in 2011, astronaut Cady Coleman played a flute in the satellite to honour the occasion.

Although he is the saint most commonly linked with the country, Saint Patrick isn’t the only Irish patron saint. When he died – apparently on March 17, 461 – Saint Patrick is said to have been buried in Downpatrick, with the remains of Saint Brigid and Saint Columba, Ireland’s other patron saints, later joining him.