The Best Traditional Irish Foods You Need to Try 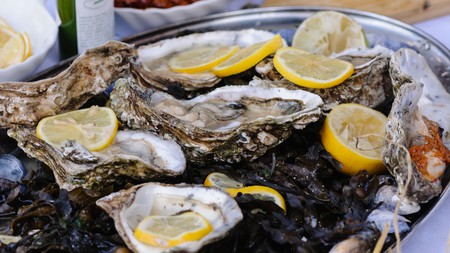 Ireland’s culinary boom means that talented chefs across the country are creating incredible contemporary cuisine, but the old classics can’t be beaten. Making use of the fresh seafood available on Ireland’s shores, the beef and lamb reared in its green pastures and, of course, the range of produce grown in the country, these are the best authentic Irish dishes to try.

Though a full fry-up breakfast is mostly associated with England, the Irish have made the ‘fry’ their own. An Irish breakfast will generally consist of some combination of bacon, sausages, eggs, fried tomatoes, mushrooms, hash browns, white and black pudding (pork meat with oatmeal and blood sausage respectively) and baked beans. Toast and tea are essential sides for this national favourite, which is also a guaranteed hangover cure after an evening drinking Guinness.

Traditional Irish stew is perhaps the country’s most well-known dish. Using cheap ingredients such as potatoes, carrots and onions, this stew dates back many centuries and was perfect for cooking tougher cuts of meat such as old mutton or kid goat. Most of the modern versions in today’s Irish restaurants use lamb instead, with herbs such as bay, parsley and thyme to add flavour. Especially popular during winter months, Irish stew is warming, homely comfort food at its very best. 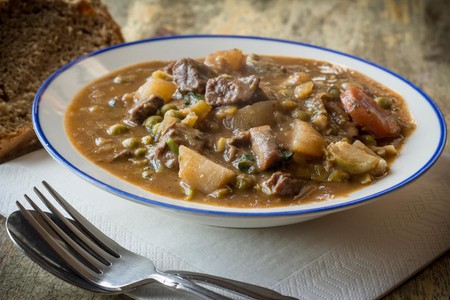 This island nation is known for its fresh seafood, and the West of Ireland has a reputation for being home to the country’s best oysters. Those harvested in Clarinbridge, County Galway are known the world over for their superior taste and quality. Seafood lovers should definitely try to make it to the Galway International Oyster and Seafood Festival, where they can watch the Irish and World Oyster Opening – or ‘shucking’ – Championships, and taste some of the finest shellfish to be found in the Atlantic.

Another entrée championing the humble potato, colcannon is mashed potatoes mixed with cabbage or kale. Seasoned with milk, butter, salt and pepper, this dish is generally served as a side with boiled ham or with bacon stirred into it. This is a nostalgic dish for many Irish people, and has even been the topic of a 19th-century folk song. Like barmbrack, this is another dish with a strong tie to Halloween, when surprises such as a ring and a thimble would be hidden inside it. Colcannon will be available as a side dish in most authentic Irish restaurants. 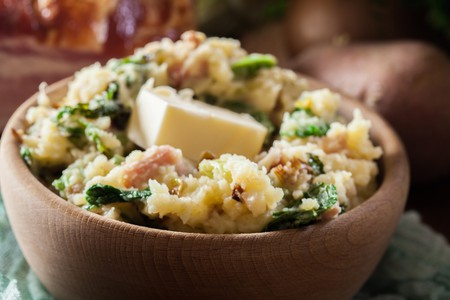 This quintessential Dublin dish has been immortalised in the city’s unofficial anthem, ‘Molly Malone‘, which tells the story of a beautiful young woman selling the fresh catch of the day on the streets. Cockles – small saltwater clams – and mussels can be found in any traditional Irish restaurant, usually steamed and served with chips.

Authentic Irish soda bread recipes have been passed from parent to child for generations. Soda bread is a form of quick bread, meaning it is leavened with something other than yeast, in this case baking soda. The other ingredients are flour, buttermilk and salt, making it a simple and quick recipe. Available in both white and brown varieties, soda bread makes a filling snack when slathered with creamy Irish butter and accompanied by a cup of tea. 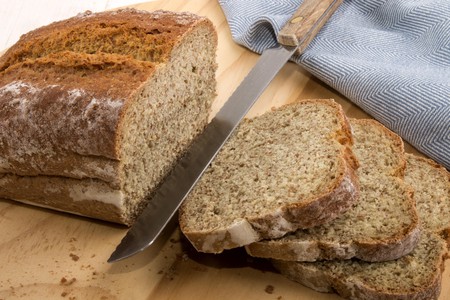 Barmbrack is a type of sweet Irish quick bread made with sultanas and raisins and usually served with tea. This treat is especially popular around Halloween, when objects were traditionally added to the dough to make a kind of festive fortune-teller game. Items included a coin, which was believed to bring wealth and a ring, which signified that the finder would be married within a year. Today, Irish supermarkets and bakeries still sell Halloween barmbracks with a toy ring hidden inside. Barmbrack can be found in many cafés, but if you’re feeling brave, you can try and make it yourself, following celebrity chef and YouTube star Donal Skehan’s recipe.

A boxty is a uniquely Irish type of pancake made of the country’s most ubiquitous ingredient – the potato. Combining finely grated and mashed potato, this mixture is then fried in a griddle pan and often served with a full Irish breakfast. Most commonly found in areas such as Mayo and Sligo, the boxty is a cheap and filling dish commonly eaten by the poor in Ireland – the name is believed to originate from the Irish arán bocht tí, meaning poor house bread. 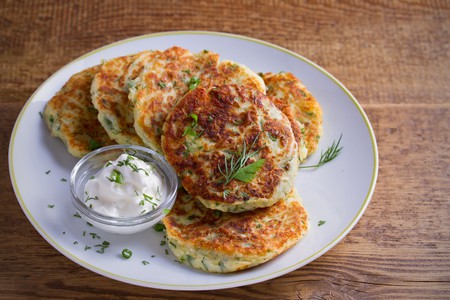 Strongly associated with Dublin, coddle is generally made up of leftover items from other meals like sausages, bacon, onions and potatoes. Made by simmering stock and steaming the ingredients inside, this dinner might sound like something of an afterthought, but it is beloved by Dubliners and even has literary connections – coddle is reported to have been the favourite meal of playwright Seán O’Casey and Gulliver’s Travels author Jonathan Swift. The true mark of a Dublin tradition, it even appears in works by James Joyce.