The Seventh District: A Cultural Journey through Budapest's Jewish Quarter 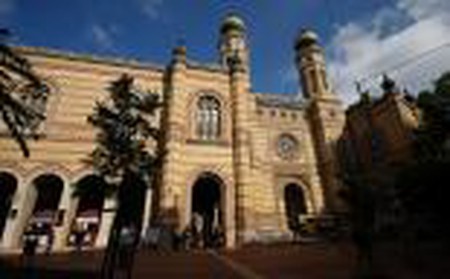 Budapest’s seventh district, Erzsébetváros, is one of the most culturally and historically rich parts of the city, and is home to the ancient Jewish quarter. Rosie Higham-Stainton explores this district, which offers a fascinating insight into the history of Hungary and its Jewish community. 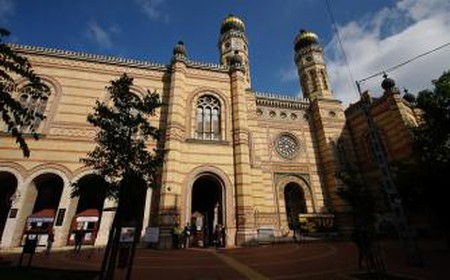 Standing outside the Rumbach synagogue in Budapest’s Seventh District, still partly boarded up following the atrocities of World War II, I can hear the jazz sounds of a double bass drifting from the entrance. Inside the dimly lit space, the rows of seats are empty and the band on stage in the distance is in full ‘practice’ swing. It is not Klezmer music and there are no Yiddish or Hebrew lyrics; it is perhaps instead a sound born from the coming together of cultures that is a noticeable feature of Pest’s Seventh District and the surrounding area.
Still referred to today as the ‘ghetto’, the heritage of the Seventh District rests heavily with the Jewish community. However, it is also emerging as an area with a thriving creative scene and a new influx of shabby, arty drinking holes known as ‘ruin bars’. There are restaurants catering for tourists and locals alike, as well as a host of glitzy home interiors shops. This is the Seventh District today — drawing from both its cultural heritage and its thriving contemporary culture in an eclectic mix that could attract comparisons with London’s once Jewish, and now creative and highly diverse, East End.
Not far away is the most conspicuous and famed Jewish tourist attraction in Pest: the Dohány Utca Synagogue. This commanding structure, once the largest synagogue in Europe, was renovated and cleaned up after the Second World War with financial support from Jewish organisations and Hollywood actor/director Tony Curtis, whose own ancestry is one of Hungarian Jewry. It is a vast site containing not only the synagogue itself but also a Jewish museum and memorial garden to commemorate those lost during World War II. Queues of tourists line the streets for guided tours whilst policeman guard the perimeter fence day and night.
In reality, few Jews still live in the Seventh District, however slipping away from the shiny Dohány synagogue you will still find the smaller synagogues and food shops that are a vital element of the community’s day-to-day life.The real Jewish amenities of this area are not always obvious — kosher restaurants sit behind tinted windows on dusty side streets and unfussy cake shops go on producing their prize treats without too much ceremony – but they are there, huddled in between the different elements of what is a constantly evolving part of Pest. 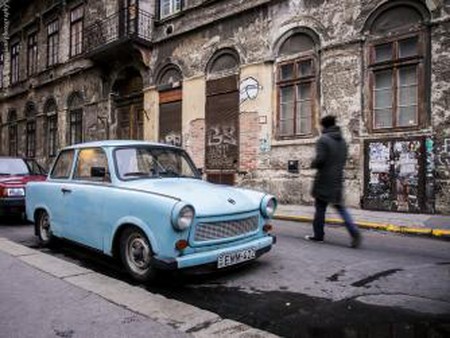 In Michael Jacobs’ invaluable Budapest – A Cultural Guide the author writes, ‘the assimilation of Hungarian culture by non-Hungarians was a remarkable feature of Budapest’s late nineteenth century development, and particularly evident in the case of Hungary’s ever-increasing Jewish community’. He goes on to say ‘the Jewish community came to include not only a high proportion of Budapest’s most prominent bankers and industrialists (notably the creators of the city’s all-important textile and milling industries) but also, by 1910, two-fifths of the city’s lawyers, three-fifths of its doctors, and two fifths of its journalists; by then, Jews accounted for a quarter of the city’s population and had earned the place the nickname ‘Judapest’. This large Jewish element undoubtedly added a necessary cosmopolitan element to a city which had become increasingly xenophobic’. As Jacobs notes, the Jewish quarter was a thriving space of commerce, religion and culture, and it remains so to this day in varying forms.
Any Jewish ‘pilgrimage’ to the Seventh District and beyond is an interesting culinary and architectural adventure. From Moorish elements, such as the ochre colours and bulbous towers of the commonly known Rumbach synagogue, designed by the celebrated Viennese architect Otto Wagner to the very private Venetian styled Orthodox synagogue, places of worship represent Jewish tradition together with an age-old assimilation and embrace of other cultures.
The modest and unflashy Jewish food suppliers and restaurants are worth investigating for the wonderful delicacies specific to Ashkenazi Jews. The Jewish cake shop Frohlich Cukraszda on Dob Utca is one of the oldest and is famed for its offerings, in particular cakes and pastries containing the traditional filling of sweet ground poppy-seed paste. In more recent years a competitor has appeared nearby on Wesselenyi Utca. Noe Cukraszda, run by an entrepreneurial Jewish-Hungarian woman and her husband, it offers wonderful tiered cakes or flodni (Hungarian Jewish cake) with gooey nuts and poppy-seeds. Rachel, the owner, has established herself as a cake-maker extraordinaire, appearing on cookery shows and running mobile cake stalls at both local markets and the grand central market, simultaneously demonstrating her very 21st century approach and people’s flourishing interest in Jewish cuisine and culture.
For the brave (and appropriately attired!), there is Hanna’s restaurant within the walls of the orthodox synagogue, where goose soup and other traditional cuisine is available to tourists at a slightly elevated price. However, hidden away down side streets you will find the real thing – from the traditional, white linen table cloth atmosphere of the Kispipa Etterem to the plastic chairs and counter service of Zamatka Kifozde; pickled cabbage and cucumber, chicken noodle broths and cholent are all worth trying.
In what could be seen as a sign of the times, a Yiddish-Italian restaurant is soon to open in the beautiful Gozsdu Udvar, or Seven Courtyards. The notion of kosher pizza and other crossover dishes, perhaps targeted at tourists, may leave you with a sense of bemusement; however, it not only implies a thriving Jewish culture, but also an adapting and imaginative one. The curiosities of Jewish Pest are not clean cut or stalwart; they are steeped in both tradition and the ongoing cultural change of this fascinating city.