Top 10 National Hungarian Dishes And Where To Find Them 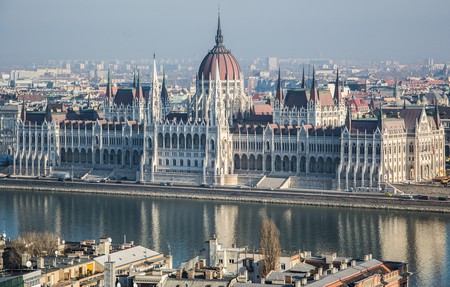 Spicy, rich and an extravaganza of different flavors, Hungary’s cuisine is a delicious and surprising discovery for many travellers to the country. Developed over thousands of years of Magyar history, traditional dishes continue to be part of a proud and abundant cultural heritage. We’ve collected the ten most typical Hungarian dishes/food and where to find their best versions in Budapest.

Goulash is one of the most famous dishes from the Hungarian culinary repertoire, yet even today there are severe misconceptions about the original version of this iconic food. The name derives from the gulyás (herdsmen), who made their rich and fulfilling dish in a kettle over an open-fire. Today, a kettle made goulash is considered as the most authentic version of all. Almost each region has its own variety, although a basic goulash is somewhere between a soup and stew, with beef (occasionally veal or pork), carrot, potato, spices and the typical paprika. Goulash has a long history going back to the ninth century, but only during the 1800s did it turn into a national symbol and a tool for preserving Hungarian identity. 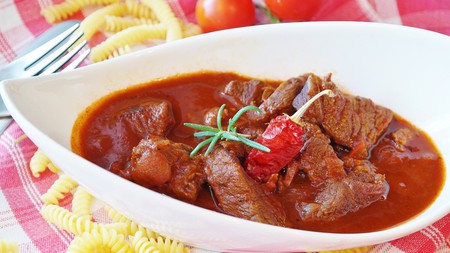 Since the 20th century, goulash has been a must-have dish at any Hungarian-inspired restaurant. But for Budapest’s best, head to Budapest Bisztró, known for its legendary Gulyás soup country wide. Located just a stone’s throw from the wonderfully renovated Kossuth Square and Parliament, Budapest Bisztró is a modern venue with a rich choice of traditional dishes, impeccable service and atmosphere.

Fisherman’s soup holds a similarly prominent place among the national dishes and, like goulash, it is cooked in a kettle over an open fire. The soup is prepared from mixed river fish (carp, catfish, perch or pike) and with a great amount of hot paprika, giving it the characteristic bright red color. It has numerous varieties, with a la Baja (made with thick pasta and mainly carp) or Szeged (made with four types of fish) being the most famous. 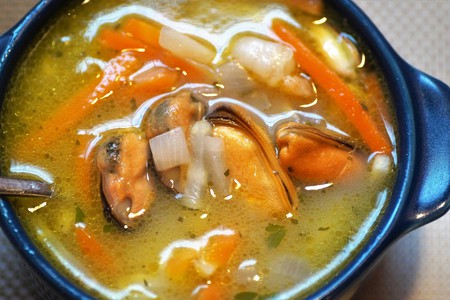 Though it is hard to pick, if you’re in Budapest then Duna Garden knows how to amaze locals and tourists alike. Set beside the Danube riverbank, a bit off the main tourist trails, the high-end restaurant also offers al fresco dining and an open kitchen.

Hungarians’ all-time favorite dish is unquestionably lángos: a deep-fried flat bread that is certainly something to avoid on a diet. Lángos (deriving from the word flame) is served as a satisfying alternative to bread. The origins of lángos are thought to be due to Turkish influence, while others believe it comes from the ancient Romans. What makes it so beloved is the endless varieties of toppings that come with it. It is usually eaten with garlic sauce, cheese, tejföl (sour cream), or even sausages. 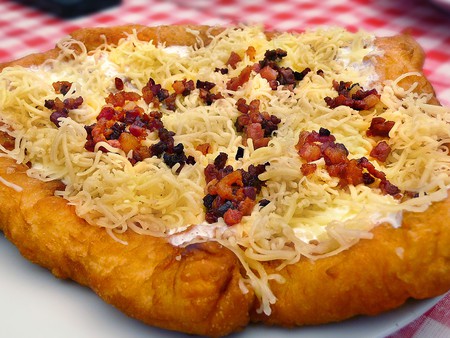 Lángos (deriving from the word flame) is served as a satisfying alternative to bread | © FrugalGlutton.com / Flickr

Most of the lángos sellers are rather hard to spot and found along small pedestrian streets, in city markets or the typical eateries just beside the bank of Lake Balafon. Lángos Flórián Square, can be found near an underpass.

Főzelék is such a unique Hungarian dish it can’t be translated into English. Though it looks like a soup at first sight, a more accurate description might be a thick vegetable stew. Főzelék is one of the few healthy choices on the list of national dishes and, being practical and easy to make, it is a typical home-cooked dish. There are special főzelék bars spread around cities, making it an ideal choice for a quick, healthy and very Hungarian dining experience. There are many variations including potato, peas, beans, lentils and carrot főzelék, all made by simmering and thickened by flour mixed with sour cream. 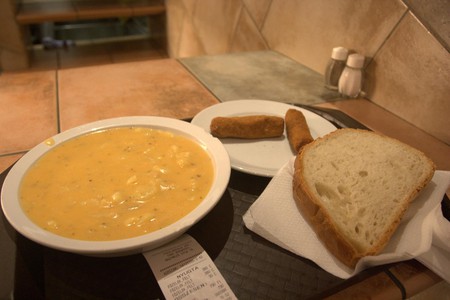 When looking for a place to eat a good főzeléki, all roads lead to Főzelékfaló Ételbár, whose menu offers a great variety at budget-friendly prices. Opened in 1997, today it operates four successful bars in Budapest.

The prestigious title of ‘Hungary’s favorite cake’ is unanimously given to somlói galuska, a delicious, unmissable dessert made from sponge cake, layered with chocolate cream, walnut kernel, rum and whipped cream on the top. Its history goes back to 1950, when the legendary Gundel Restaurant’s headwaiter (Károly Gollerits) envisioned this novel dessert. However, the first publicly tasted cake was made only in 1958 by Béla Szőcs, master confectioner, whose cake became an award-winner at the Brussels World’s Fair. Since the creator’s family keeps the original recipe secret, somlói galuska made elsewhere varies in form and preparation but always maintains the same fundamental ingredients. 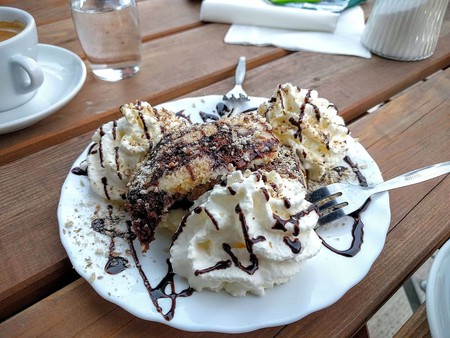 With time, somlói galuska was re-thought and modernized by many, and some places have even created their own signature version. One the finest is certainly served at the Michelin-stared Onyx Restaurant. However, if searching for the best example of the classic version, then head to Gundel Restaurant. The multiple award-winning restaurant is a leading, top-notch, opulent venue with over 100 years of successful history. The excellent quality of this restaurant is reflected in the price, but their famous somlói galuska is worth it.

There is pörkölt (stew) and there is paprikás (a stew with a lot of sweet paprika and tejföl). Though the two are usually referred to as absolutely separate dishes, the ingredients, the method of preparations and the outcome are so similar that, broadly speaking, paprikás can be described as a type of pörkölt. They are among the well known dishes of Hungarian origin, and were being eaten as early 1780. The word pörkölt literally means ‘roasted’ and the dish is made of beef, pork, lamb, chicken, pork or liver (varieties depend on the region) cooked with onion, paprika and other spices, resulting in a juicy dish served with another Hungarian gastro-curiosity, the nokedli (egg noodle dumpling). As the old saying goes ‘It’s not a real Sunday without pörkölt.’ 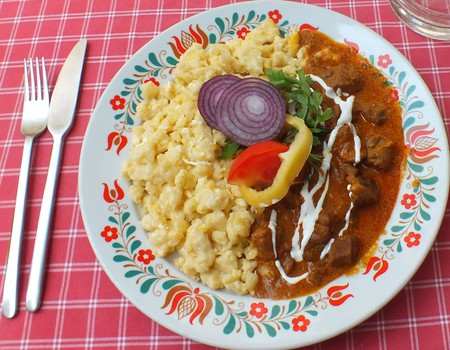 Náncsi néni Vendéglője is a Hungarian-gastro gem just 20 minutes from the heart of Budapest. It has been recommended as a must-see in many travel guides since 1980. The authentic place boasts traditional Hungarian cuisines, where among the better dishes stands the mouth-watering veal stew with nokedli in its best form.

The legend of dobos torte started in 1885, when the Hungarian confectioner József C. Dobos introduced his pioneering cake at the National General Exhibition of Budapest. Dobos torte is among the most prominent Hungarian dishes, made from sponge cake layered with chocolate buttercream and topped with caramel. Both the technology, form and taste was groundbreaking in its time. The main ingredient, the buttercream, was unknown and was used for the very first time. Dobos kept his recipe secret until his retirement, although now dobos torte has many more variations. 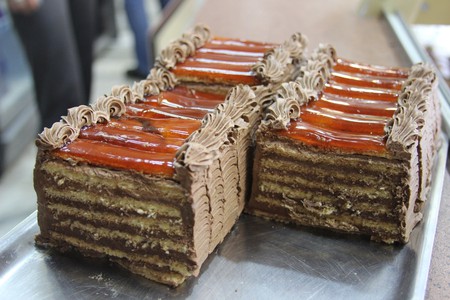 For the most extravagant masterpiece, one should visit Desszert Szalon in the picturesque city Vác. But there’s no need to go further than the outskirts of Budapest to find the finest classic dobos torte. Zila Coffee House and Restaurant is famed for its delectable desserts, no surprise given that is four-time winner of the ‘Cake of Hungary’ annual competition.

Stuffed cabbage is quite common in Central Eastern European kitchens, and Hungarian töltött káposzta is made of cooked cabbage (mostly pickled) filled with pork mince, mixed rice and flavored with the unmissable paprika, pepper and tejföl. It is a typical dish around Easter and Christmas time. Although mainly a homemade dish, most Hungarian taverns keep it on their menu. 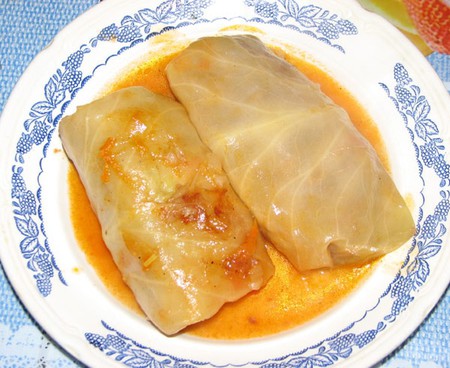 With a truly traditional and homely philosophy, Csarnok Vendéglő is a perfect choice for some well-priced, tasty, authentic Hungarian food. Csarnok guarantees a classic töltött káposzta presented on the characteristic red-checkered tablecloth, accompanied by friendly service right in the heart of Budapest.

A special sweet spiral cylindered bread made from sweet yeast dough baked over charcoal and coated in plenty of sugar. This is the secret of kürtös kalács, one of Hungary’s most beloved street pastries. ‘Chimney cake’, as it is usually referred to, has a sweet, caramelized coating, onto which cinnamon, cocoa, coconut, or chopped walnuts are added. The original kürtös kalács is from the Székely area of Transylvania and from there it dispersed along Hungary, becoming a vital part of Hungarian food identity. The once must-have dish for the nobility, and the essential component of any wedding and baptism, over the years kürtös kalács has turned into a cherished everyday food, a demanded pastry during Christmas markets and an indispensable element of every festival. 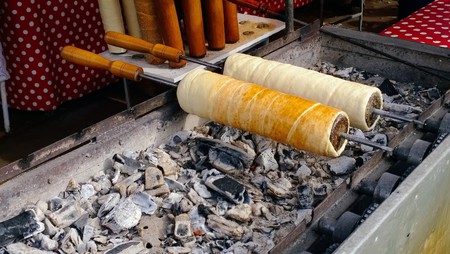 During market times kürtös kalács is easy to find and, unless you’re served a cold one, you can’t go wrong. Budapest’s most renowned spot, which serves kürtös in eight different flavors, is Molnár’s Kürtőskalács Kávézó. This restaurant also participates in special European road shows ensuring that no country misses out on kürtös.

Just reading a rough translation of túrós csusza, or pasta with cottage cheese, might not persuade people to try this dish, but once tasted it’s never forgotten. It is a traditional Hungarian dish made from a special pasta (csusza) with cottage cheese (very different from its European counterparts) and crispy bacon. All of this is mixed in a pre-heated bowl. It is a perfect one-course main dish that is easy to cook, cheap and filling. If craving something sweeter there’s a version for that, too: túrós tészta leaves out the bacon and instead adds plenty of powdered sugar to the mixed cottage and tejföl cream. This version is also common and opens the door to all the further Hungarian pasta specialties, such as poppy seed, walnut or cabbage pastas, so loved by locals and so unfamiliar for visitors. 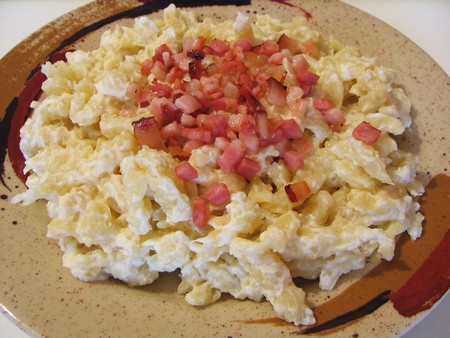 Since túrós csusza is so easy to make, Hungarians rarely go to a restaurant when craving one. But luckily, restaurant owners know if they wish to keep a Hungarian-inspired menu, the csusza must remain. Újpesti Kakukk Vendéglő (Cuckoo Inn) is a place that has weathered all Hungary’s political upheaval and remained popular throughout. Expect clean design with a somewhat socialist-inspired atmosphere, excellent quality food and generous portions.

For more dishes to try read our article on alternative Hungarian food.