Everything You Need To Know About Drinking In Hungary 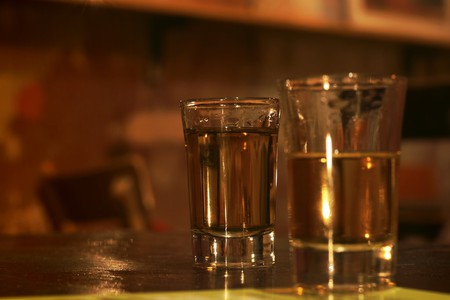 Every country has its unique approach to drinking, but while certain countries have their own culture surrounding their more popular beverages others opt to be a little more voracious about their alcohol. Hungary is one such country, a part of the world that is exceptionally proud of its wide variety of options when it comes to dulling the inhibitions.

First things first, it’s important to know the right thing to say when you clink those glasses. Like much of the language, the word itself is notoriously difficult to say and – if you happen to meet a Hungarian while out drinking – expect to be the target of their own amusement as they put you up to this tongue-twisting challenge.

That word is ‘Egészségedre’ – meaning ‘to your health’ – and will take some practice to perfect. Pronounced egg-ess-shay-geh-dreh, it’s used both for ‘cheers!’ and in response to a sneeze. Try to get it right first time (Hungarians will only find humour in your struggles) even though you may well spot close friends shortening this admittedly lengthy greeting with one another – anything from ‘egészségi’ through to ‘egész’ to even a simple ‘egs’, with a ‘sh’ sound at the end.

If you want to go one further, then you’ll need to conjugate it differently to allow for a group to cheer ‘to our health’. Here you want ‘Egészségünkre’ – or egg-ess-shay-goonk-reh – and if you can master this then you’ll have made a Hungarian friend for life.

But more important than any of this is to be careful with eye contact. As your glass touches, be sure to look your fellow celebrator in the eyes; it’s highly rude not to.

The national drink of Hungary is pálinka, a fruit brandy that, to put it frankly, could well topple a horse. It’s potent, typically available in bars at 40% but easily reaching the lofty heights of 80-90% if you’re ‘lucky’ enough to get hold of a homemade brew.

It comes in a broad range of fruits, commonly found with apple, pear and sour cherry but can come in more varied flavours like nuts, chocolate or softer tastes like blueberry and honey.

While it is more common to slam down the drink in one, getting the pain out of the way, most Hungarians have acquired the taste for this strong drink and the better quality products can be sipped and even – if you can believe it – be enjoyed for their taste. This is a drink that is almost always served up at least as an option before a big meal or for any celebration, so it’s one you’ll need to prepare yourself for.

It’s believed that if you warm the glass up in your hand after drinking and can detect the fruit it was made from – rather than the burning alcohol – then it was a good pálinka.

Many Hungarians will use pálinka to kill viruses or subdue pain, most likely thanks to the high alcohol content, but almost every Hungarian will swear that Unicum is not alcohol but a medicine.

It’s a herb-based drink that is not as potent as Jägermeister, tastes similar but is considerably more disgusting. Because of its concoction of herbs it is regularly served post-meal as a digestif, and indeed is helpful for settling the stomach if you’re sick.

All the same, it’s equally as important to Hungary as pálinka and has been in production for well over two centuries, its recipe a closely guarded secret.

Like any country, Hungary has its fair share of cheap, locally produced lagers of varying qualities. With many names to choose from – Soproni, Borsodi, Arany Ászok, Dreher – there’s no sense drinking an imported lager when there are equally good, cheaper Hungarian options on tap. With that said, the one to avoid is Kőbányai, a beer that was mass produced exclusively during the Soviet era, intended for quantity rather than quality and hasn’t changed much since.

The sad truth is that though each of these beers were once their own, the modern industry has since taken over with the likes of Heineken, Coors and Asahi producing the majority of any Hungarian lager brands. If, then, you’re hoping for a beer that is still truly Hungarian, perhaps consider Pécsi Sör, an enjoyable – if basic – pilsner with a recognisable green label and font combo that is still produced by a wholly Hungarian company in Pécs, south of the country.

One rule to consider when it comes to drinking beers is that, traditionally, Hungarians don’t actually clink the glasses of their beers, a stigma that was brought about in the 1840s when Austrian generals celebrated an underhanded victory over the Hungarians. The younger generation usually have no qualms with this, however, but it’s something worth noting when drinking with older Hungarians.

It may be hard to believe, considering the limited availability of Hungarian wines outside of the country, but the history of wine production in the country has quite a noble heritage. Some of the more recognisable wine regions of Hungary – such as Tokaj – have been producing wines for centuries, and were even drunk by the monarchs of Europe.

In fact, wine was made in Hungary when the Romans brought its production over in the 5th-century AD, and for many years the French and Italians were using Hungarian wine barrels for their wine production.

Faltering from two world wars and being restricted in the Soviet era was a major setback for Hungarian wine, but the years since the fall of communism has allowed the country to claim back some of its once glorious wine empire. As a result Hungarians are intensely proud of their wines, and in fact it’ll be harder for you to find non-Hungarian wines in a bar than anything else.

There’s a long list of unique and worthy wines worth trying, but to try the most famous Hungarian wines you’ll want to look for the spicy red wine Egri Bikaver – or Blood’s Blood of Eger – or the super sweet dessert white wine Tokaji Aszú. 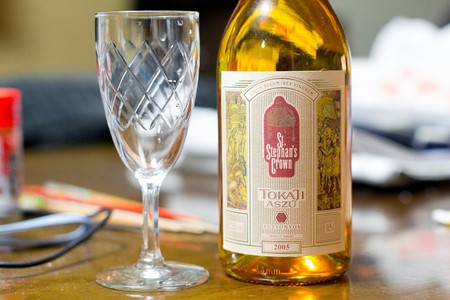 The soda bottle was invented by Hungarian Ányos Jedlik, and there’s a legend that says – as a result – the concept of the wine spritzer, of mixing wine with soda water, was also a Hungarian invention.

Whether that’s true or not, it’s undeniable that fröccs – by its Hungarian name – is a typically magyar thing to drink, especially in the summer months. There are entire bars devoted to the fizzy wine, and many Hungarians prefer it to sipping wine sans bubbles, especially if that wine is one of the cheaper bottles.

But it’s not as simple as picking a wine type and adding some soda water, there’s a code to ordering fröccs that ultimately affects not only the size of the glass you’ll get, but what ratio of wine to szódavíz you’ll get. A kisfröccs – or small spritzer – will get you an even 1:1 ratio. 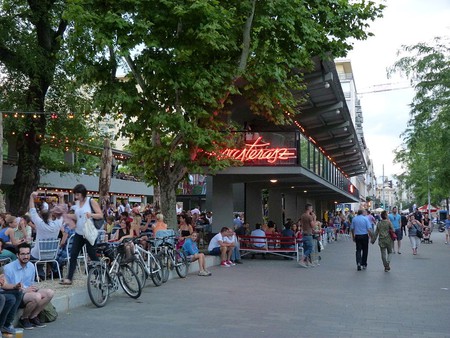 One last anomaly worth mentioning is the – perhaps horrific – idea of red wine mixed with a cola soft drink. While it is originally a Spanish ‘invention’ called calimocho, it’s something younger Hungarians drinking for the first time also enjoy and goes by the name of vadász.

In part this is because the addition of cola softens the harshness of alcohol for newly drinking teens, but primarily the reasoning is the very same as the Spanish: simply to mask the nasty taste of the cheap bottle of red wine that they’ve opted for.

As a result it’s become something of a guilty pleasure for adult Hungarians now, too, so try not to appear too repulsed if you spot someone mixing a glass of red with some black sugary drink.