A History of Budapest in 10 Objects 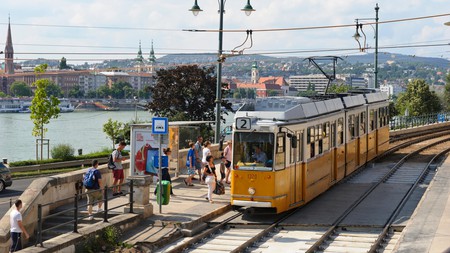 Get a glimpse into Budapest’s rich past via this selection of intriguing historical artefacts. From the potent local spirit Unicum to the mummified hand of a saint, these objects – all visible in the city today – bring the history of the Hungarian capital to life.

Contemporary Budapest, a vibrant city with a population of almost 2 million, began life as an ancient Celtic settlement. Later occupied by the Romans, who called their city Aquincum, the Hungarian capital was given its current name only in 1873, when the areas of Óbuda, Buda and Pest were unified. While capturing the history of Budapest – encompassing periods of empire, revolution and Communist rule – in a few objects is near impossible, this brief but diverse catalogue of artefacts retells Budapest’s story in vivid fashion.

The lapidarium of the Aquincum Museum in Budapest’s third district is one of the largest collections of its kind after those in Italy, showcasing around 1,000 stone objects dating back to the second to fourth centuries AD. According to the curator of the collection, Tibor Budai-Balogh, the works on display are truly outstanding examples of sculptures from the Roman Empire and Pannonia. Most of the exhibited sculptural remains in the collection are reliefs from grave monuments such as tombstones, sepulchral structures and sarcophagi. However, the museum also has tombstones and votive altars; the most striking example of the latter is the Snake Motif Altar. The artefacts on show at the Aquincum Museum offer a window into life in the Roman city, founded in part due to the thermal springs found there. 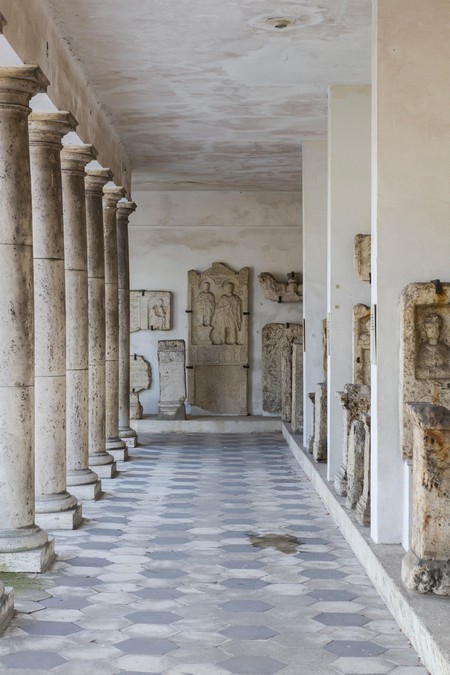 When walking the streets of Budapest, it is common to spot sports shoes with a distinctive ‘T’ logo. This emblem belongs to the beloved Hungarian heritage brand Tisza, which has been producing footwear since 1942. Its logo and some of its current styles (albeit in an updated form) were designed in the 1970s, when the brand had a cult following among young Hungarians. Since the end of Communist rule in Hungary, the brand – which takes its name from a Central European river – has seen a resurgence. Today, with the brand having expanded into new collections for women and children (as well as fashion accessories and clothing lines), Tisza has come to symbolise the soul (and sole) of trendy, contemporary Budapest. 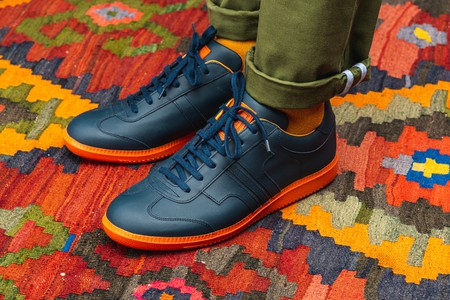 Tisza shoes date back to 1942 | Courtesy of Tisza

When visiting Budapest’s Central Market Hall, it is impossible to ignore the abundance of paprika hanging from the stalls in huge garlands – distinctive not least for their vibrant red-orange colour. Paprika, especially once powdered, is a staple ingredient of Hungarian cuisine and is essential for many of its national dishes: goulash, pörkölt beef and onion stew, lecsó vegetable ragout and, of course, the eponymous paprikás – a creamy chicken dish. Powdered paprika comes in two varieties, spicy or sweet, and is available in virtually every food store. 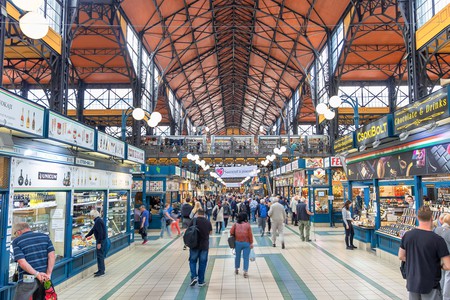 The Great Market Hall, or Central Market Hall, is one of the best markets in Budapest | © agsaz / Alamy Stock Photo 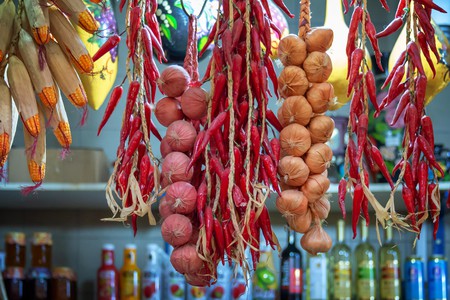 Just a few metres away from the Hungarian State Opera on the majestic Andrássy Avenue stands a lion. The big cat in question is, of course, not a live one (although it is life-size); rather, it is an opulently painted sculpture designed to replicate the delicate lion figures produced by the Herend porcelain manufacturers. Herend is a world-renowned Hungarian heritage brand dating back to 1826, famous for its patterned luxury porcelain tableware, ornaments and figurines. The lion on Andrássy Avenue is regularly made over with hand-painted Herend motifs and patterns reflecting the company’s best-known designs. A visit to the Herend factory – set not far from the shores of Lake Balaton – is a popular day-trip option from Budapest. 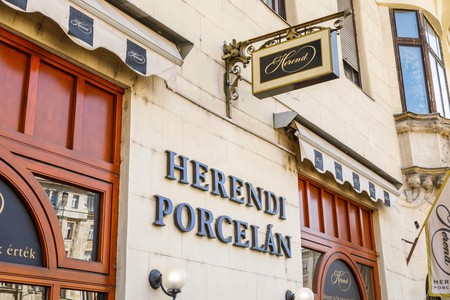 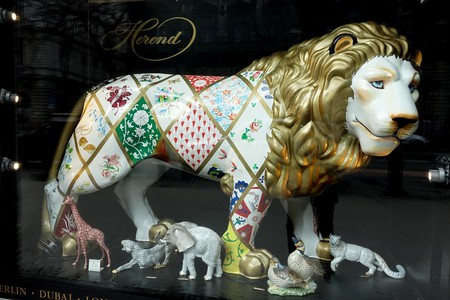 The Herend Lion is an emblem of the brand | © V. Dorosz / Alamy Stock Photo

The heroes of Communism at Memento Park

Located about a 30-minute drive from the centre of Budapest, Memento Park is the resting place of 42 monumental Communist-era sculptures that were pulled down after the fall of the Communist regime in Hungary in 1989. Once looming large in prominent positions across the city, the monuments date from between 1945 and 1989. In particular, gigantic representations of Lenin, Marx and Engels dominate the park, along with allegorical monuments to Hungarian-Soviet friendship and liberation. A favourite among visitors today would be Stalin’s boots, left when the largest Budapest statue of the recently deceased Soviet leader was toppled in the 1956 revolution. Equally imposing is the six-metre (20-foot) Liberation Army Soldier with hammer-and-sickle flag, which once stood on top of Gellért Hill, where it could be admired by comrades from every part of the city. 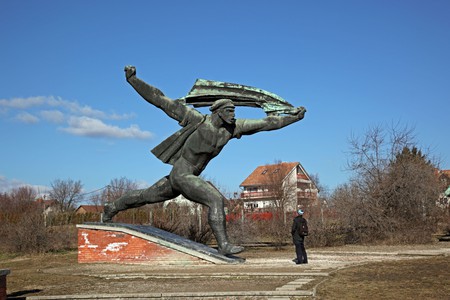 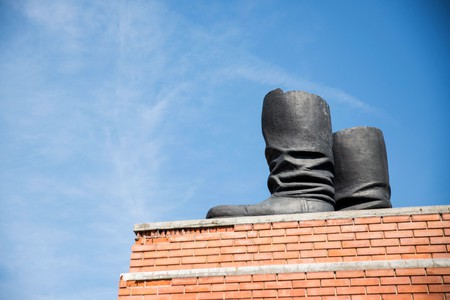 The Holy Right Hand of St Stephen, King of Hungary

The mummified hand of St Stephen, King of Hungary, is perhaps among the strangest (not to mention most hair-raising) ‘objects’ you’ll come across in Budapest. Dating back to the death of Stephen I of Hungary in 1038, the Holy Right – as it is often called – has had a colourful history. Following its detachment from the corpse of King Saint Stephen in 1061, it was stolen and subsequently travelled far and wide from Transylvania to Salzburg and Dubrovnik in between. Since its permanent return to St Stephen’s Basilica in downtown Budapest in 1987, it has drawn thousands of pilgrims and history buffs each year. In addition to being a unique relic of the first King of Hungary, the holy hand is believed to possess miraculous power. 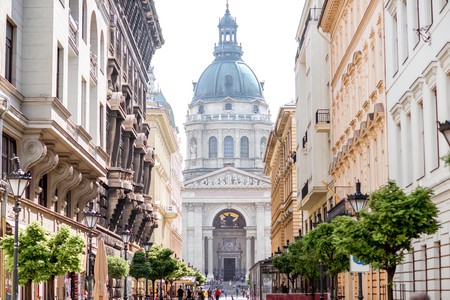 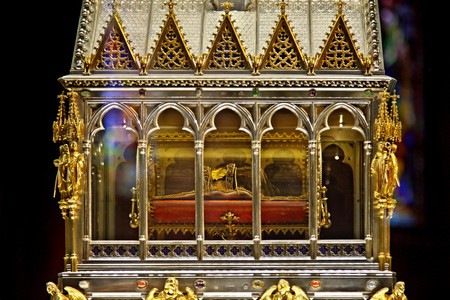 Often referred to as the national drink of Hungary, Unicum is a legendary liqueur. Originally conceived as an aid to digestion at the royal court of Austria-Hungary in 1790, this herb liqueur is distilled from over 40 herbs and spices, based on a secret family recipe. It is enjoyed either chilled as a shot or warmed by the hand in a cognac glass. In the Zwack family distillery in Budapest, Unicum is aged in large oak casks before being bottled in the distinctive round bottle, which has been the hallmark of this historic brand for centuries. 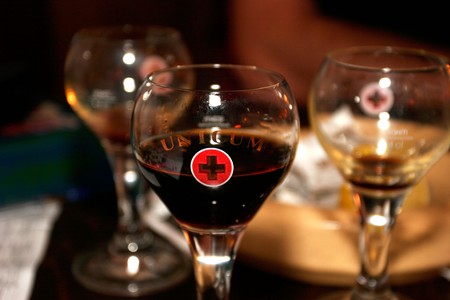 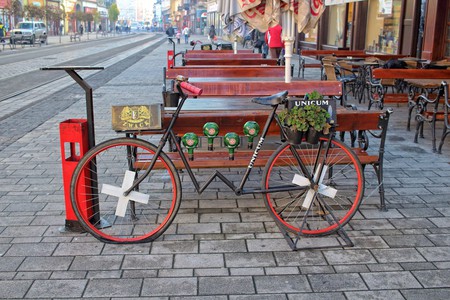 Budapest boasts one, if not two, of Europe’s most beautiful tram lines. You can travel down either bank of the Danube in a retro-vintage, Hungarian-made Ganz KCSV-7 or Ganz CSMG from the 1960s-’70s – the height of the Communist era. On the Pest side (Route 2), the tram travels to and from Margaret Bridge and along the way passes the world-famous Hungarian Parliament, the Chain Bridge and the Central Market Hall. On the Buda side (Route 19), the tram passes three of Budapest’s famous thermal baths: Szent Lukács, Rudas and Gellért. Passengers on this route can also admire the Castle Garden Bazaar (Várkert Bazár), and the Feneketlen Lake – just find a good window seat and enjoy the ride! 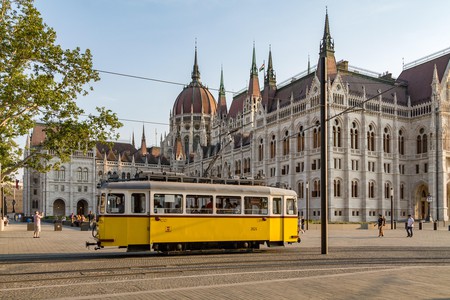 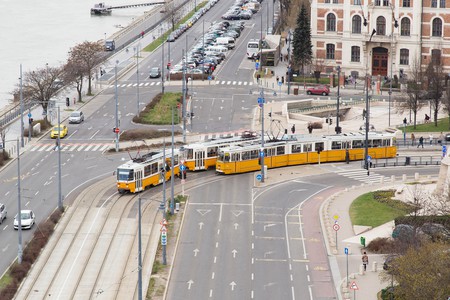 Facing the music is one thing, but wearing it? In 2000, Zack Tipton created a pair of glasses from his father’s Creedence Clearwater vinyl, and so began the life of Budapest-based glasses company Vinylize. But its origins go way further back than that – the company’s story is closely linked to Hungary’s Communist era. It was at the EMI eyewear factory – formerly known as Granvisus – that Tipton presented his idea, and set to work learning the processes involved in manufacturing glasses. At its peak, the factory produced 400,000 frames a year, which were sent out across the Eastern bloc. Tipton worked with the remaining workforce, considerably diminished following the fall of Communist rule, to develop the technology required to produce eyewear from vinyl records for a global market. Though that particular factory closed in 2005, Vinylize has met with continued success, scooping up a Red Dot Design Award for its Ashby model and counting celebrities including Elton John and Quentin Tarantino among its devotees. Capturing the zeitgeist of the sustainability movement, today the company boasts of recycling 3,000 tons of unwanted vinyl annually. 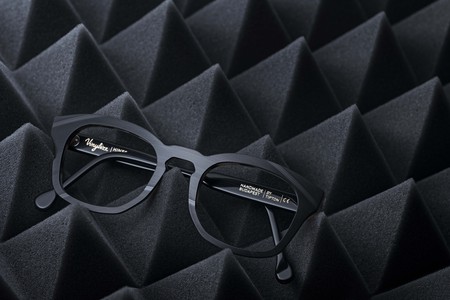 Vinylize combines style and sustainability | Courtesy of Vinylize
Give us feedback