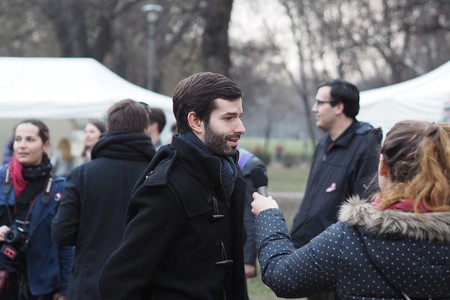 One of the founding members, and current leader, of the Hungarian political group Momentum Mozgalom (the Momentum Movement), András Fekete-Győr has had a busy 2017 so far. After launching a successful campaign named NOlimpia, to force a referendum on whether Hungary should drop their bid to host the Olympic Games in 2024, Fekete-Győr and Momentum have seen intense media coverage and popular interest ever since. We caught up with him to talk about NOlimpia, the economic situation in Hungary, and what’s next for Momentum.

Early this year, a relatively unknown movement burst onto the political and public scene. Momentum Mozgalom, a group founded in 2016, began the NOlimpia campaign in January 2017, ultimately persuading the government to drop their bid to host the 2024 Olympic Games. András Fekete-Győr is the leader of this new movement. Originally from Budapest, he undertook an ERASMUS study abroad placement at a university in Germany before returning to his native Hungary with the desire to make a change. Along with a group of fellow activists, Momentum was founded in 2016, and the group looks set to continue making an impact. 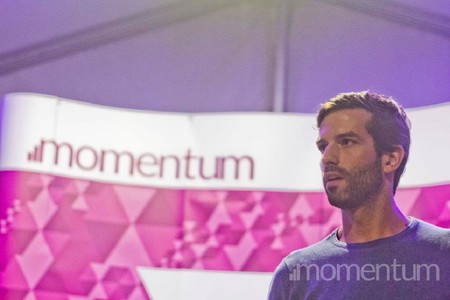 Why did you start Momentum?

Out of responsibility and out of opportunity. Firstly, I had the opportunity to bring people together: I had a lot of contacts and friends who wanted to do something. They had a diploma, every one of them, but they didn’t want to join the multinational companies or the law firms; they wanted to change something in their environment. So this was the opportunity – and of course, with opportunity comes responsibility. Also, I was born in 1989 while the political system was undergoing a huge change in Hungary, so I also felt that with this historic moment, that our generation has to stand up and do something.

Were you surprised by the public response to the NOlimpia campaign? Did you expect such an overwhelming result, or even to obtain enough signatures in the first place?

No – we never dreamt of such a big success. 266,000 is really huge! But I did believe that we were going to reach the threshold required for the referendum [138,000]. The media coverage was huge as well. I expected that a little bit – not as much as we received, but I expected something, because it was a brand new movement from the young generation.

Of course, we also had belief in ourselves; we are well-organized, we can communicate well, and we are really enthusiastic about what we are doing. So this can be really appealing for people.

You did a lot of campaigning in the streets – how did people perceive the campaign?

People loved it! People loved to be part of this campaign; it was not just the 143 members of Momentum, but also 1,700 activists and several thousand other Hungarian citizens who collected the signatures for themselves. So you know, people felt that they were part of the democracy and that they could be a part of the decision-making process. And so they should be!

Considering the already significant cost of the World Aquatics Championships (to be hosted by Hungary in July 2017), what do you think the repercussions would have been if Budapest were to host the 2024 Olympics?

I think that there’s a chance that the country would have gone bankrupt. Not just like Greece [whose hosting of the Olympics in 2004 likely contributed to the country’s debt crisis], but you know there’s always a chance because our politicians are not capable of doing business well. So, they are neither economical, nor cost-effective. Therefore, it would have been a project where a few people and businesses would have profited a lot, but not the people. Economically and socially it could have been a disaster, not least because at the moment we don’t have the basics in our society, like education and housing and health care.

So you would rather see the money that would have gone towards funding the Olympics be directed to those areas instead?

Yes, of course. We had to draw people’s attention to these problems. Of course, every opposition party is doing the same. But I believe that we have the credibility and the honesty to talk about these kind of things and people will believe us. 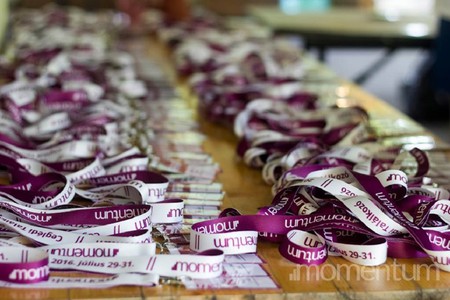 There are some who would say that the Olympics could have been Hungary’s opportunity to shine – what would you reply to that?

That Hungary has to look for other areas in which to feel national pride. Take a look at Estonia or Finland, for example: Estonia has one of the most developed e-governance and e-administration systems, and Finland has one of the best education systems on the earth. And they are proud of it and rightly so! We don’t have to build stadiums or organize an Olympic Games to feel this pride. We have to invest in good governance, in human resources, and in long-term prosperity.

You’re often compared by the media with a younger Orban (the current Prime Minister of Hungary). What do you think about this?

Yes, because of my beard! But really, we are completely different personalities. Yes, I have a law degree like him, I have a beard like him, I have brown hair like him. I am young, and he was young when he started in politics, too. But no. I would never be corrupted, and I would never put my own interests above the national interest. And I really mean this – otherwise I wouldn’t have committed to this movement.

So what’s next for Momentum?

In Hungary, unlike in other countries, secret files from the Communist era remain secret and unopened. These files contain sensitive information about people that allows others to blackmail them – something which would not happen were the information out in the open. Many of these people hold important positions, and Hungary is the only country in the former Eastern Bloc not to have opened these files. So, we have to initiate the social movement on this. It’s not enough if you are in Parliament and you simply file a report; you have to bring the people into this, and you have to talk about these things, because it’s an actual national security issue that these people are able to be blackmailed, that our politicians are blackmailed by this. So this is our next big campaign.

We are also doing a road trip around the country and creating these little Momentum communities all around Hungary, as it’s important to get involved on a local basis.