A History of the Shoes on the Danube Bank 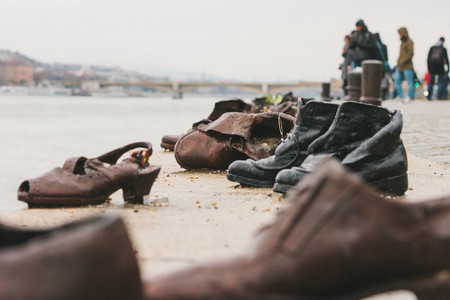 On the banks of the Danube, just in front of the Hungarian Parliament Building, stand 60 pairs of iron shoes, pointed towards the river. Poignant in their simplicity, a tragic story lies behind this memorial to the hundreds who lost their lives as a result of the atrocities committed by Budapest’s Arrow Cross militiamen during the Second World War.

As World War II entered its final years, the national socialist Arrow Cross Party took control in Hungary. Led by Ferenc Szálasi, the party shared a number of beliefs with Germany’s Nazi Party – including Antisemitism. From October 15, 1944 to March 28, 1945 the Arrow Cross Party ruled the country as, in cooperation with the Nazis, thousands of civilians (mostly Jewish) were deported, sent to slave labour camps or murdered. At the same time, Arrow Cross militiamen ran loose in Budapest wreaking havoc and destruction. During the party’s five month rule, estimates suggest that 10,000 people were killed in the streets with a further 80,000 sent to concentration camps. 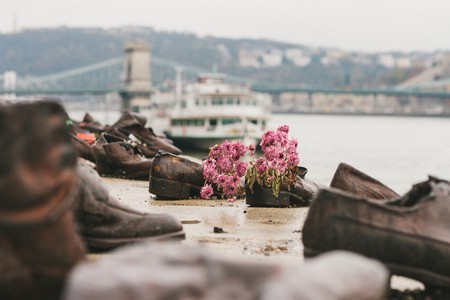 During this time, Jews in Budapest were often rounded up on the banks of the Danube before being shot into the water which would then carry them away. Even more harrowingly, they were regularly forced to remove their shoes as these were a valuable commodity during the war; their murderers would then sell them or use them themselves. 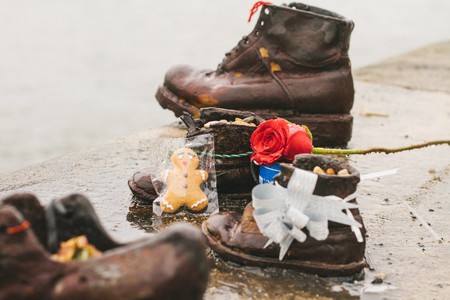 In memory of those who lost their lives during the Arrow Cross rule, the “Shoes on the Danube” memorial was erected on April 16, 2005. Created by film director Can Togay and sculptor Gyula Pauer, it takes the form of 60 pairs of shoes cast in iron and anchored to the ground. Different styles and sizes can be seen, showing that nobody was safe – not men, women or children. Today, candles are placed in the shoes, flowers are laid alongside them and a plaque reads “To the memory of the victims shot into the Danube by Arrow Cross militiamen in 1944–45. Erected 16 April 2005.”