13 Ways to Enjoy Winter in Budapest 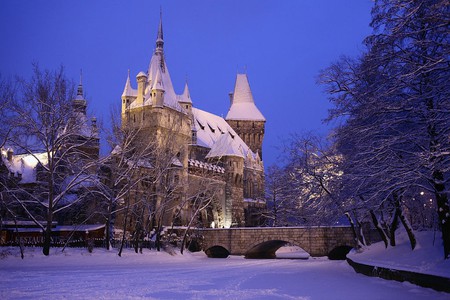 While Budapest can drop to as low as -20°C (-4°F) during winter, the city doesn’t grind to a halt. There’s still plenty to do and see during the colder months, and since there are fewer tourists at this time it’s the perfect opportunity to come and enjoy the Hungarian capital… 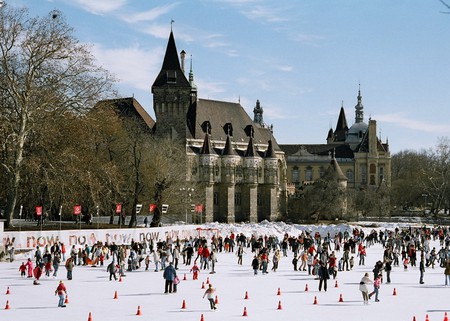 This is perhaps the number one reason to visit Budapest over all others during winter, and commonly the most recommended thing to do while here for the winter months. Once the icy cold has truly settled in, the City Park’s boating lake is frozen over and turned into Europe’s largest ice skating rink. That, in itself, is a treat, but the grandeur of the surrounding architecture – from the fairytale-like Vajdahunyad Castle to the baroque styled Városliget Café – is a sight to behold as you whiz by on your blades.

Mulled wine at the Christmas markets

If you’re visiting any European city during December then the chances are you’re going to find it tough to avoid the Christmas markets. Budapest has a wide number of options available in that regard, splattered throughout the city both on the Buda side and in Pest. They’re suitably festive and ornate, and are perfect spots for buying handcrafted gifts for friends and family. But since you’ll be battling with the icy temperatures, they’re also fantastic waypoints for a warming cup mulled wine (or better yet, Hungarian pálinka) as you work your way around the city.

Grab a bag of roasted chestnuts

Finding ways to warm yourself will be an important task while visiting Budapest in the winter months, and while stopping off in one of its many special coffee shops will be a big part of that, there will also be a number of chestnut roasters easily found throughout the city. There’s no real rhyme or reason to where these vendors appear, but populated areas like train stations are a good place to look. The warming, festive flavour will surely give you the strength to carry on through the city. 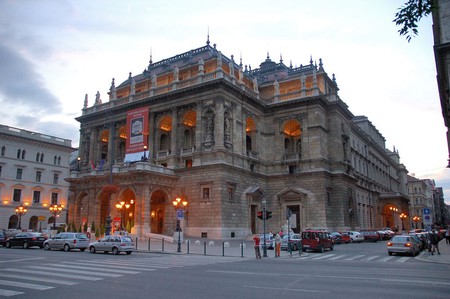 With a number of famed musicians in its history, Hungary remains rather proud of its various opera houses and theatres. Attending such places remains a pastime that all generations and backgrounds continue to enjoy, too, so when winter rolls around and the Christmas trees start going up, it’s about time for the Nutcracker to start its annual performance. With shows at the gorgeously ornate Opera House, it’s certainly one of the most grand options for winter fun.

Watch the light show at the Basilica

Over the last couple of years, as the popularity of Budapest’s Christmas fairs have started to grow, St Stephen’s Basilica has decided to get on board. A laser show has been set up on the facade of the epic structure, displaying animations and cartoons as well as a depiction of the Feast of St Stephen. For 2017 it’s been enhanced even further, using technology to allow for those with special 3D glasses to see the animations appear to jump off the face of the building.

During the winter months, Budapest’s trams are often covered in fairy lights, making for a rather pleasing sight as it rattles through the streets. The most populated tram lines are taken over by these glowing lights, but it’s definitely worth taking one for a ride along the side of the Danube on tram line 2.

It is said that kurtoskalács, or ‘chimney cake’, was the very first cake. Whether that’s true or not, it’s a Hungarian treat that is an icon of the country. A sweet strip of bread dough is wrapped around a spit and slowly cooked over a fire, then coated with sugar, cinnamon and other sweet flavourings. You’ll find these at any number of Christmas markets, but there are so many stalls dotted throughout the city that you’ll regularly have to battle temptation of the sweet smell. 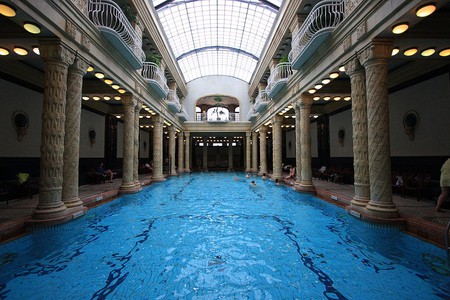 Bathe in a thermal spa

If you’re really struggling to warm up then head to one of Budapest’s many thermal spas. Széchenyi and Gellért are the more popular ones, and while it might seem crazy to head outside in the freezing temperatures in just your swimwear, that’s not such an unusual idea to Hungarians. The warmth of the waters will stave off the biting cold, making for a truly unique experience.

If there’s enough snow during the winter – and that’s usually not an issue – then many people will head up to the hills of Buda to ride up and down the natural slides. There’s a chairlift to help you get back up, but either way it’ll be a whole day of thrills with a view of Budapest in the distance. Some people even take their skis and snowboards! 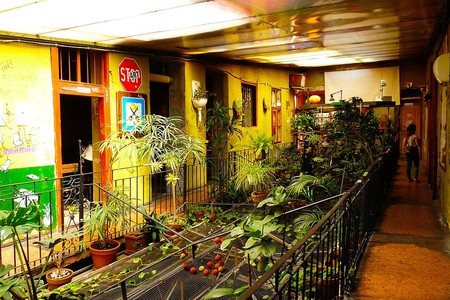 Warm up at the ruin bars

If you’re going to be staying inside to avoid the cold, then you might as well tick off one of the tourist destinations exclusive to Budapest. There are ruin bars scattered throughout the city, with the most popular to be found in District VII. These once-abandoned residential blocks have since been converted into sprawling complexes, typically maintaining their rundown chic style.

Like any city at Christmas time, Budapest’s major roadways get spruced up with a number of festive and non-festive lights. It makes for a real treat to enjoy the glowing trees and lamps alongside the hectic nightlife, and while it might not be the sole reason to travel to Budapest, it will all the same make for a special moment as you take in the bright lights and sights. 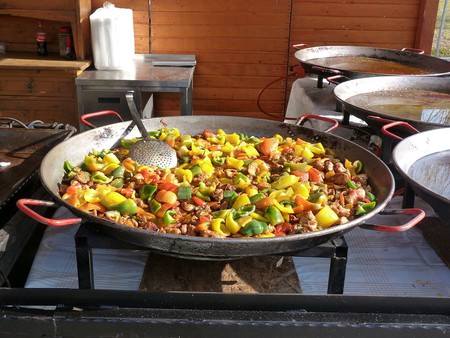 Hungarians don’t need a reason to celebrate, and they certainly don’t need an excuse to head out for something delicious to eat. There are a number of festivals throughout the winter period, but once the Christmas trees are thrown out the fun really begins, with a number of festivals all focus on eating. Farsang – and its accompanying ‘Fat Thursday’ where restaurants offer 50% off – is when the feasting starts, but there are other, specialised festivals that specifically celebrate a type of food such as pork, fish or cheese!

Bring in New Year’s on the Danube

Budapest definitely has its places for partying, and if you’re heading to the city specifically for a New Year’s Eve celebration then your options are infinite. Consider this, though: a cruise along the Danube to get the best seat in time for the firework display at midnight. There are a number of these types of cruise options available, but the ones that offer unlimited drinks and a DJ until 3am may well be the best choice.