Then and Now: Can You Recognise Athens from These Old Pictures? 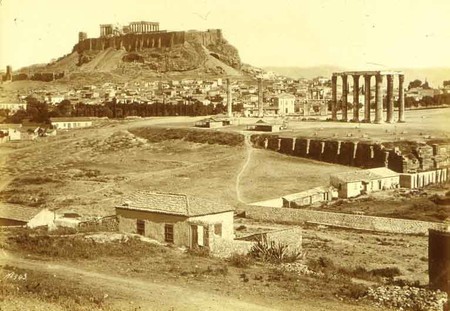 Believe it or not, Athens used to be a beautiful little city, before it turned into the capital of the country in 1834 and even then, the arrival of King Otto, first king of the newly-established nation, allowed it to welcome the construction of beautiful and imposing neoclassical buildings.

Rapid growth, rural exodus and the exchange of population in the 1920s that gave rise to its modern aspect followed: a heterogenous mix of post-modern concrete buildings next to old-charm houses and neoclassical mansions sitting next to age-old monuments. But maybe it is this juxtaposition of old and new that gave the Greek capital its charm. Can you recognize Athens from these old photographs?

Syntagma Square is Athens’ central square. Located in front of the Old Royal Palace, it was built shortly after King Otto designated the city as the new capital of the country. Its first name was actually Palace Square, until it was renamed Syntagma (Constitution) after an uprising in 1843, where the people and the military demanded a constitution be created.

Today, Syntagma still bears strong social and political importance. It is usually here that protests strike. The recent picture was taken at almost the same angle and shows that little has changed, including the prestigious Hotel Grande Bretagne still looking grand. 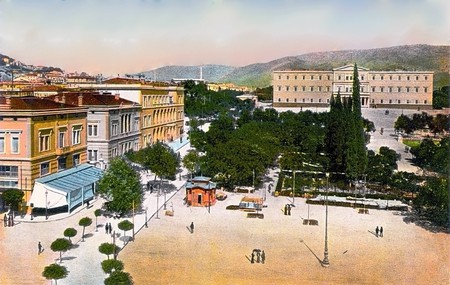 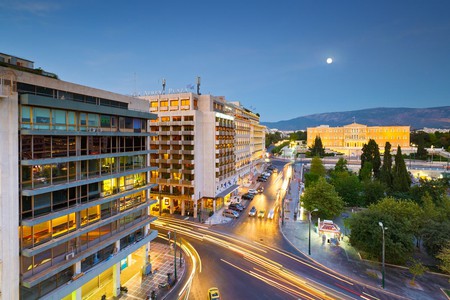 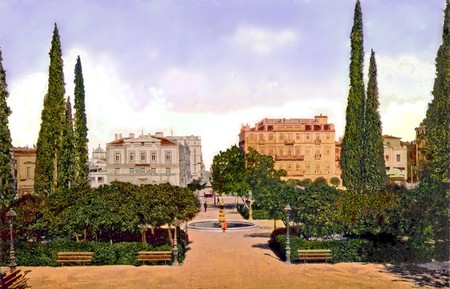 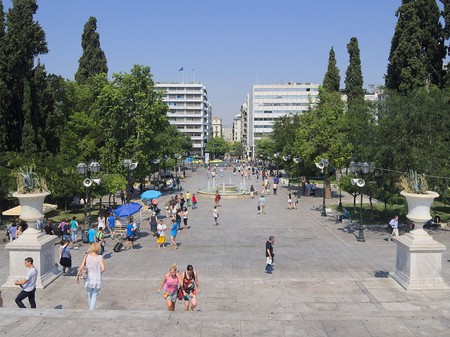 View of Syntagma Square, Athens, from the staircase at the east end | © C messier/WikiCommons

In the early 20th-century, tourism in Greece was not what it is today. At that time, all the wonderful treasures of ancient Greece were readily available and accessible to everyone. No entrance fee or fences. But this freedom also contributed to the devastation of some archaeological sites across the city, including the theft of some artefacts or marble.

Today, the Roman Agora is located in the picturesque district of Plaka, which used to house the majority of the population of Athens. Now fenced up, the Gate still stands tall, although it has received a few facelifts since the first photo was taken. 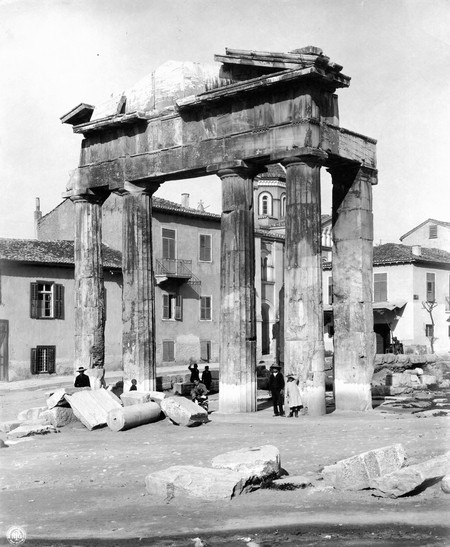 Gate of the Roman Agora, today 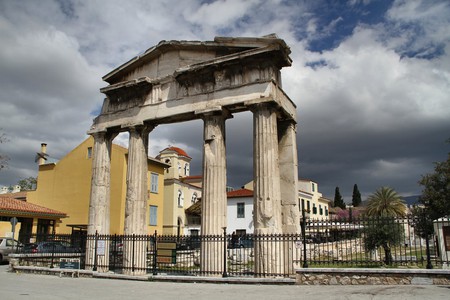 Portico of the Roman Agora at Athens | © dynamosquito/Flickr

Located on the southwest slope of the Acropolis, the Odeon of Herodes Atticus is a stone theater that was built in 161 AD. Used as a venue for music performances, the theater slowly deteriorated under the effects of time, until it was fully renovated in the 1950s. The most striking fact though is how empty and bare the Filopappou Hill (see the monument at the top) is when the first photo was taken, some time at the end of 1800-early 1900s. 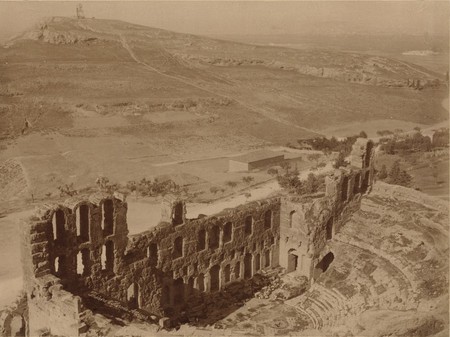 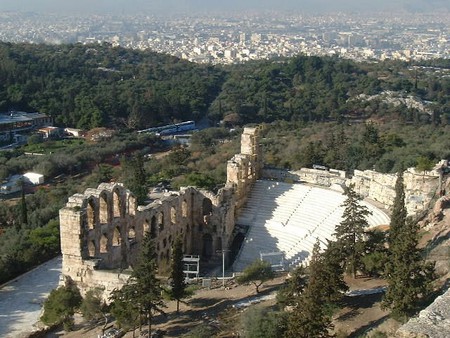 The Old Parliament House (Palia Vouli) is a stellar neoclassical building that housed the Greek parliament from 1875 and 1935, before it was relocated to the Parliament House on Syntagma Square. The photo was taken some time before 1904 as the statue of Kolokotronis has not been erected yet (though not visible in the modern photo, you can still see the base).

Today, the Old Parliament is now home to the National Historical Museum. 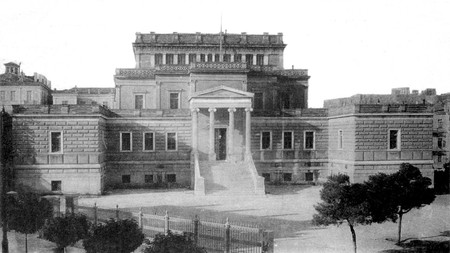 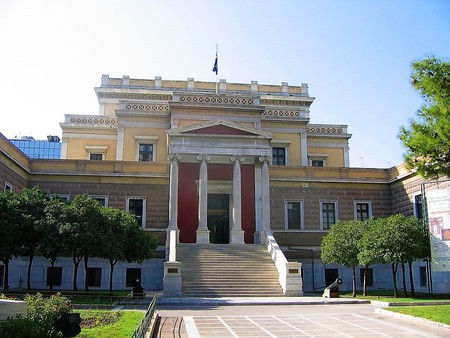 One of the first roads designed in the modern city of Athens, Ermou was one of the main axes of urban plan, conceived by the architects Kleanthis and Schaubert in 1833 upon King Otto’s request to modernize the new capital. Connecting Syntagma Square to the Kerameikos archaeological site, it passes through several main areas such as Monastiraki, Psyrri and Thisseio.

Today, a good portion of Ermou is limited to pedestrians, and the upper part of it is known as the shopping street of central Athens, bordered by many boutiques, stores and cafés. 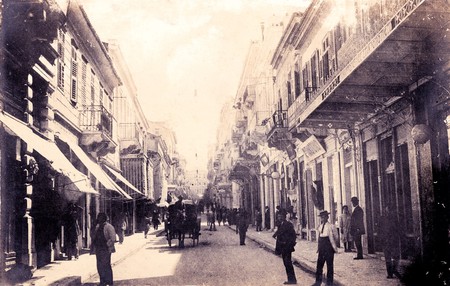 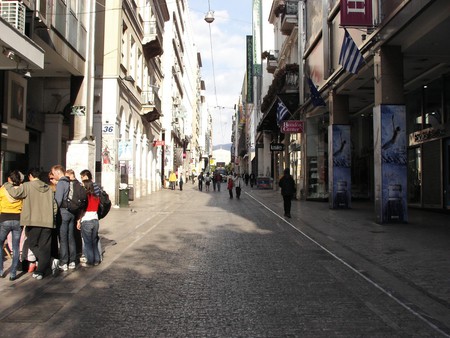 Another main artery of the center, Panepistimiou Street, formally known as Eleftherios Venizelou Street, is famed for the many stunning neoclassical buildings it contains, including the Athenian Trilogy, as well as the Numismatic Museum, the Catholic Cathedral of Athens, and the National Bank of Greece. 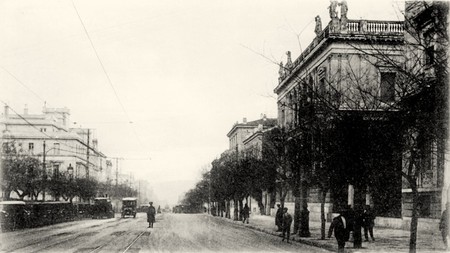 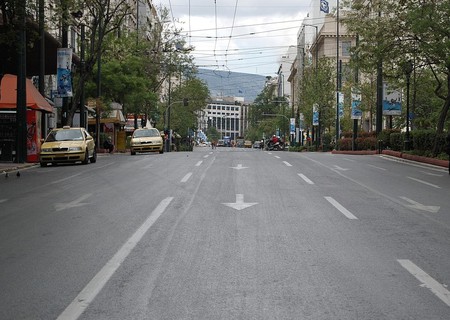 Athinas Street was named after the goddess Athena and connects Ermou Street to Omonoia Square. In its middle stands the Varvakeios market, the oldest market in the city built in 1886. Even though the modern photo is taken from a different angle, you can still see that the original structure of the central market building was preserved during the renovation works in 1979-1996.

A visit to the central market is definitely an experience that will appeal to all your senses, but don’t miss out the chance to explore Athinas Street, still busy as ever, and cramped with stores of all kinds. 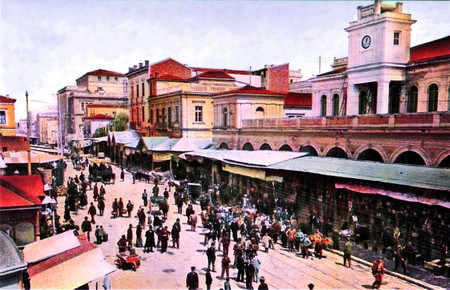 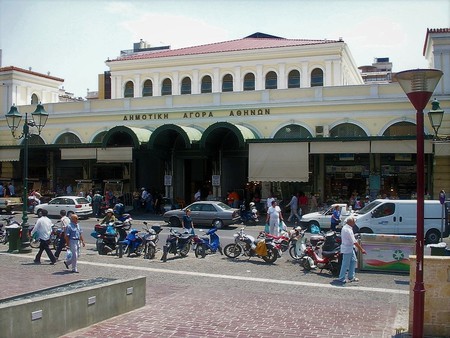 Hadrian’s Gate, also known as the Arch of Hadrian, is a bit of a puzzle for historians. The reason why it was constructed is still obscure, though we know it was around 131 or 132 AD. An early theory was that the arch marked the line of ancient walls around the city but this has been refuted thanks to excavation works. But even if little is known about it, this Gate seems unchanged throughout the years. 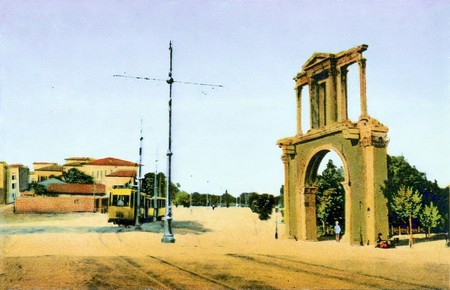 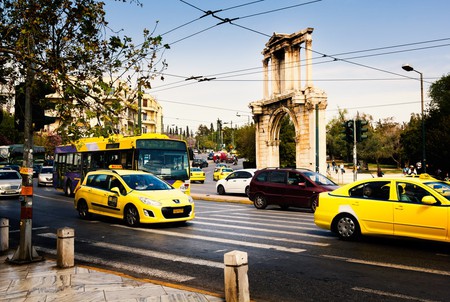 Athenian streets with ordinary traffic, around Hadrian’s gate | © Sarra22/Shutterstock
Give us feedback