How to Spend a Fun Winter Weekend in Athens 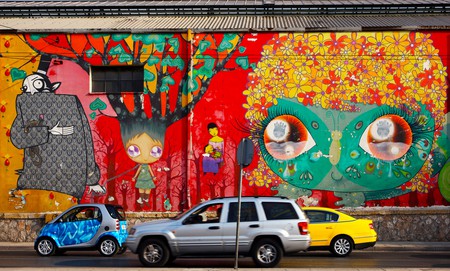 Bagged yourself a winter weekend escape in Athens? Make the most of the cooler weather and dash across the city, exploring foodie trails, mountain hikes and some of the best street art in Europe. Here’s the lowdown on how to spend a fun winter break in the Greek capital.

Delight your inner foodie on a culinary odyssey

Athens is a long-confirmed favourite for gastronomes, so taste you way around the capital on a city-centre food tour. Book the Flavors of Athens Food-Tasting Walk with Athens Insiders, and your guide Panos will lead you through old and up-and-coming neighbourhoods. You’ll eat homemade sourdough bread at Kora Bakery; drink some of the best coffee in town at Foyer; and go Greek honey tasting at Kolios. 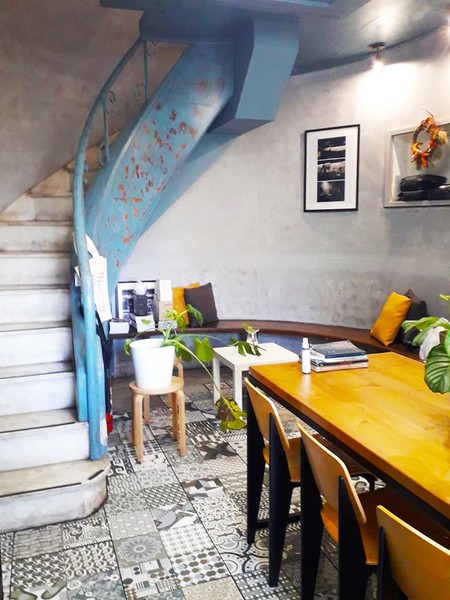 Meat and fish aficionados will adore touring Varvakeios Market, while Diporto next door – a snapshot of the 1950s with wooden barrels and checkered tablecloths – serves authentic homemade dishes. Then try souvlaki – Kostas in Agia Irini square serves one of the best in town, with Hoocut a hipster alternative dishing out a much-loved pitta with lamb.

The cosy Feyrouz serving lahmacun – a pizza-style dish, typically topped with minced meat and vegetables – and Lebanese soups is also a must. End the tour on a sweet note with a hearty serving of Greek doughnuts (loukoumades) from Lukumades. 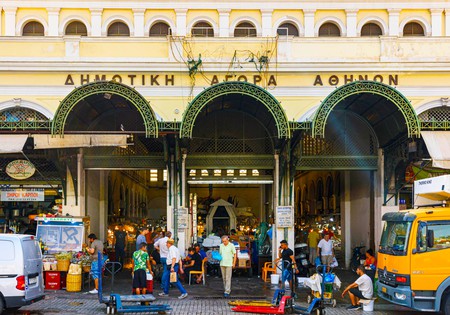 The colder months are the best time to hike one of the nearby mountains; tourists are nowhere to be found and the weather is more comfortable than in the summer – keep in mind, though, you’ll need warm clothes, especially in January and February when temperatures range from 5C to 15C (41F to 59F).

Imittos mountain is a favourite with Athenians, thanks to the many hiking (and biking) trails that cut through the forested slopes. There are several entry points to the mountain, with the one in Kaisariani among the most popular.

Let the maps around Imittos guide you. Some trails are more rugged than others, but the views of whitewashed Athens from the highest slopes are unbeatable. Depending on the trail you pick, you might also see the Byzantine Kaisariani Monastery hidden within the forest. A great area to rest and tuck into a spinach pie from the local canteen is Kalopoula – all sorts of crowds picnic here, from lovebirds and bikers to families. 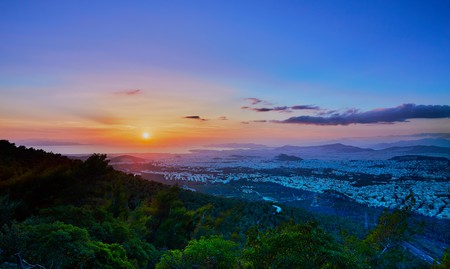 Art enthusiasts will love the Basil & Elise Goulandris Foundation. This contemporary art museum opened in 2019, but the collection has been accumulated by Basil and Elise Goulandris since the 1960s. Their hoard now forms one of the most important private 20th century collections, with works by Cézanne, Van Gogh, Monet, Degas, Picasso, Miró, Giacometti and Chagall. Apart from the sheer volume of masterpieces on display, it’s also interesting to learn about the couple’s friendships with many of the featured artists.

A guided tour makes a real difference here. You’ll learn about the Little Dancer Aged Fourteen sculpture by Degas and how it criticises the corrupt ballet scene of the early 1880s; you’ll also see some of Picasso’s earliest realist works before he turned to cubism; and you’ll discover why Van Gogh cut off his ear following a fight with Gauguin. Works by Greek artists such as Nikos Hadjikyriakos-Ghikas and Yannis Tsarouchis are also on display. Following the tour, indulge in a heavenly cheesecake at the museum cafe on the mezzanine level, and make sure to return for one of the temporary exhibitions and events organised on the lower floors. 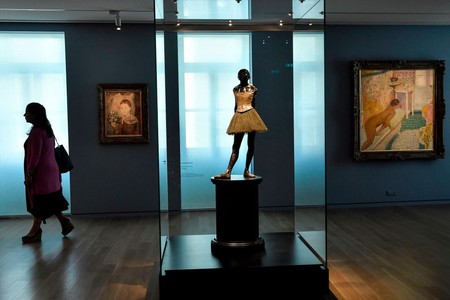 Dine in a hip new restaurant

While a food tour is the best way to taste Athenian street food, dining in one of the city-centre restaurants will give you a clearer idea of what Athens is capable of when it comes to boundary-pushing cuisine. There have been many additions over these last few years, some in the fine-dining field – such as the Asian-fusion Nolan – and others focussing on Greek flavours with a twist.

Two entries, both opened in May 2021, are Gastone and Dopios. Gastone is set in a modern, semi-industrial space on Praxitelous street, one of the liveliest thoroughfares in Athens. The menu incorporates international street flavours, viewed through a Greek culinary lens. You’ll taste some of the most delicious meat here, including their signature steak tartare, flat iron steak and suckling pig.

Dopios, occupying an unassumingly pretty space near the historic University of Athens, is all about the modern Greek mezze. Don’t miss the taramosalata with prawn crackers or the divine graviera cheese croquettes. You will find all kinds of fresh fish and seafood here – the calamari is a must – alongside vegetarian and vegan options. 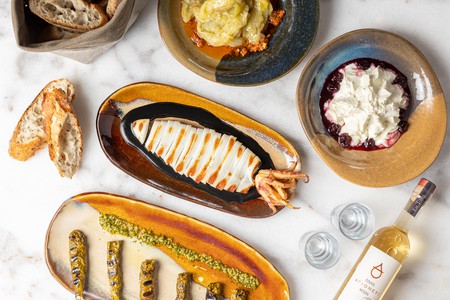 Make the most of the buzzing Athens nightlife

The centre of Athens is chock-full of bars; head to the more youthful areas of the city, such as Keramikos, Metaxourgeio and Exarcheia, or along the many streets around Syntagma square (Praxitelous being one of them) to find your favourite.

The Clumsies, Black Duck and Praxitelous Bar are among the classics, but you really can’t go wrong here, even if you know nothing about Athenian nightlife. Simply follow a group of friends on a Friday night or ask a local for their tip. 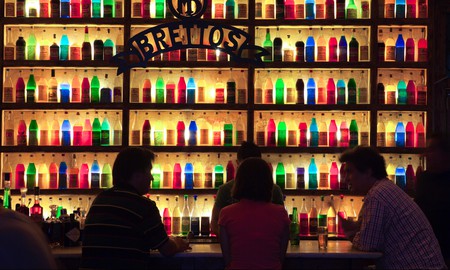 There are more than 4,000 abandoned buildings in Athens, which serve as the perfect canvas for street artists. Graffiti has always been part of the city, but it’s the evocative murals that have turned Athens into a street-art hub, especially since the Greek financial crisis in the late Noughties.

Awesome Athens Experiences organises daily street art tours where you can marvel at the various artworks while gaining an insight into what each of them means. Kalliopi and Thomas will take you on an amusing ride, marked by acrylics, paste-ups and captivating stories. You’ll get to see the Last Supper in Athens, a 95m (311ft) long mural created by renowned artist INO as part of the Leonardo da Vinci: 500 Years of Genius exhibition launch in 2019 – INO took almost a month to complete the piece, which offers a re-interpretation of Da Vinci’s Last Supper, in which the Apostles are replaced by people of power.

Many more INO works adorn the city, such as the 2021 Spasiba, which depicts a little girl with a hammer about to demolish social inequalities, plus murals by Dimitris Taxis, Onebran, Achilles, Yiakou, Soteur and Sonke. The latter’s Sad Princesses – a collection of surrealist women in monochrome – was a tribute to his ex-girlfriend, painted along the path she took daily to work. You will also see beautiful pieces by female artists including Anna Dimitriou, who is also a film director and often includes actors in her pieces, and manga-inspired Simoni Fontana. 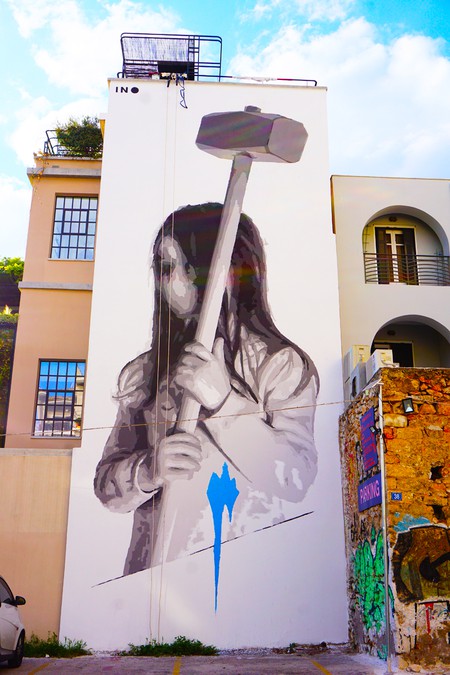 Book a room at Sir Athens 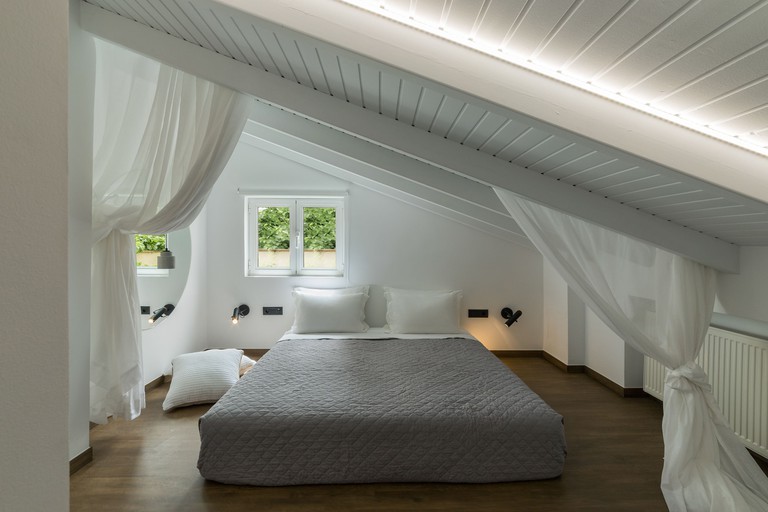 Courtesy of Sir Athens / Expedia
Sir Athens opened in 2018 with the mission of making guests feel like a sir or dame. The beautiful neoclassical building that houses the boutique was built in 1800, neighbouring the historic house of Pavlos Kountouriotis, a Greek rear admiral and first President of the Second Hellenic Republic. It now serves as a stylish haven in the heart of the city, with four elegant, white suites.

The minimal decor, contemporary furnishings and polished bathrooms give each suite a sophisticated look. Opt for the Sir Attic to get the royal treatment. It occupies the entire second floor – the number two button on the lift works with a key and only leads to the attic suite – and comprises two large interconnecting bedrooms; one homely yet sleek with a little bar corner for your personal cocktail hour, and one absolutely Zen, where the bed sits on the floor and long, white curtains allow you to turn it into a tent-like sanctuary.

If you don’t feel like going out, arrange for breakfast to be served in bed (at an extra cost), choosing from nine menus with a Greek focus. Among the offerings are a generous bowl of delicious Greek yogurt with fresh fruit; soft bread with butter and jam; and fluffy croissants. Vegan and gluten-free options are available, as well as healthy snacks for the kids. The TV has access to Netflix so you can enjoy breakfast while watching your favourite show.

Visit Discover Greece for more on all the exciting things happening in Athens and all over Greece.

Aegean Airlines flies daily from London Heathrow to Athens with fares from £40 (on special offers). For full terms and conditions, visit en.aegeanair.com or call 020 8759 3800.