What Is The Caldera Of Santorini? 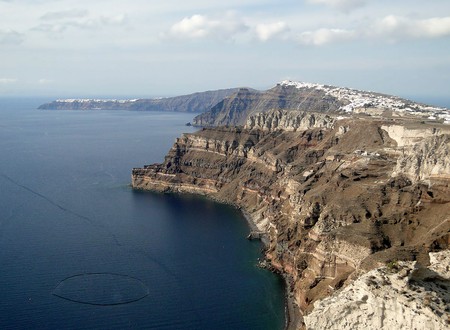 Santorini, along with Mykonos, is probably the most famous Greek island. Its sun-bleached, smooth-edged houses, azure-domed churches, narrow streets and glorious views over the expanse of the Aegean Sea are emblematic of this little paradise. But not many people know that the volcanic island we know was centuries – or even millennia – in the making. What’s more, few know exactly where its caldera is. To understand this, a little overview of the island’s history is necessary.

The group of islands known as Santorini, so named after the small chapel of Agia Irini (or Saint Irene) by the Venetians, is located at the heart of the Aegean Sea and comprises five distinct islands: Santorini (aka Thira), the main island; Thirasia and Aspronisi at the periphery; and the two Kameni islands at the center. 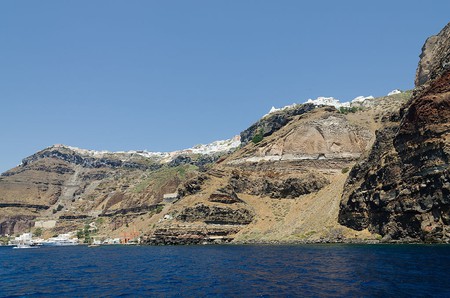 Santorini’s half-moon-shaped bay is the center of the caldera (a cauldron-like volcanic depression), which collapsed after a volcanic eruption during the Minoan civilization, eventually leading to their decline, just like Pompeii. Indeed, the eruption was so massive that it seems to have caused significant climate perturbations; it was possibly one of the biggest volcanic eruptions on Earth. The outer edge of the ancient volcano gave birth to Thira, the main island. Subsequent eruptions during the 16th and 17th centuries are responsible for the creation of the islands Palea Kameni and Nea Kameni. Furthermore, excavation works done at the site of Akrotiri have shown that the island, at the time named Kallisti, was the cradle of an advanced civilization dating back to 4000 BC. 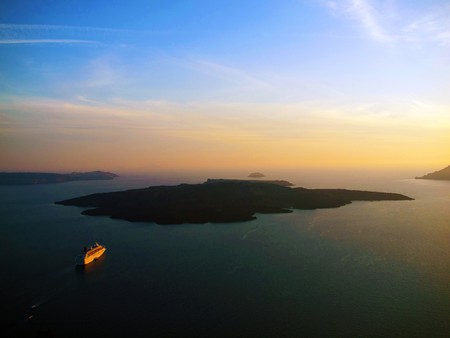 Nea Kameni, in the middle of the submerged Santorini caldera | © Kevin Poh/Flickr

It’s amazing that the stunning white-washed villages perched atop Santorini’s reddish cliffs are home to thousands of people, despite the potential – and very real – hazard. In 1956, an earthquake struck the island, which led to the collapse of the volcano’s magma chamber. The disaster also destroyed over 2,000 houses. But the largest known eruption happened about 3500 years ago and shaped the caldera we know today, which is considered one of the most beautiful in the world and which attracts hundreds of thousands of visitors every year, who come to admire the splendor of the sunset from Oia. 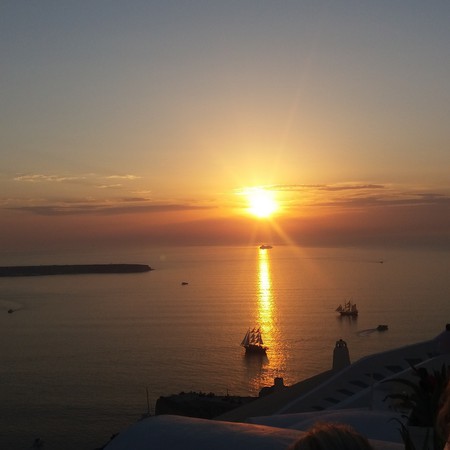 Sunset over the Aegean Sea | © Ethel Dilouambaka
Give us feedback