The Mykonos Creatives Giving the Party Island a New Narrative 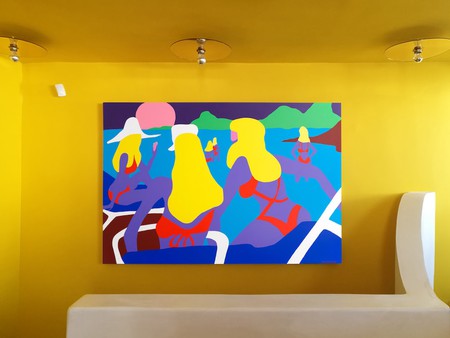 Culture Trip explores the creative initiatives helping to evolve Mykonos’s reputation from a party island to a leading cultural destination.

As a Greek island to visit in the summer, Mykonos has never been more popular. The island’s reputation for day-long beach parties and hedonistic evenings has transformed the bohemian insider retreat of the 60s and 70s into one of the most popular summer destinations in Europe.

However, over the past few years, creatives have set about harnessing the artistic history of the island in new ways, reminding revellers of the original island spirit. The result is fresh attention on a vibrant cultural scene that’s shaping the island’s reputation as a modern centre for art, fashion and the bohemian lifestyle.

“Dio Horia started back in 2015 after I had a desire to visually research what Mykonos is today and how the island has changed since the 1930s,” explains Marina Vranopoulou, founder of the influential Dio Horia gallery in Mykonos.

Vranopoulou’s exploration of the island’s identity has seen the gallery become a locus of the Mykonos art scene revival, exhibiting international artists to locals and visitors each year.

Dio Horia’s influence now extends beyond Mykonos too. The gallery has shown at art fairs such as EXPO Chicago and Untitled Miami and been featured in leading international publications such as Artforum, The New York Times and The Evening Standard.

Alongside the gallery space, Dio Horia runs a respected residency programme with artists across a variety of mediums coming to work there. 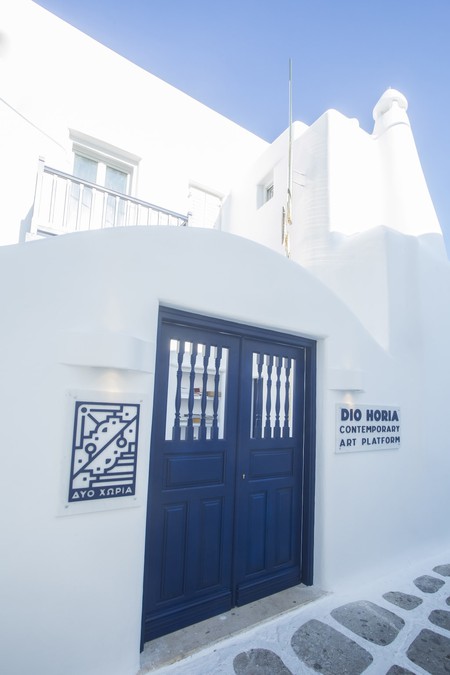 The response and creative output from these visiting artists have been impressive. Vranopoulou tells Culture Trip: “Only this year, Todd James made these amazing series of drawings inspired by the architecture of the island, Matthew Palladino and Caroline Larsen both based their work on Greek mythology and Trudy Benson named her paintings with Greek words that inspired her colour palette.”

That the island has proved inspiring for these creatives is no surprise. When we ask her what the allure of Mykonos might be to creatives, Vranopoulou attests that the landscape has impacted artists for decades: “The light, the architecture, the lifestyle that is still raw, the dry rocky mountains.” She continues, “And hopefully, our team and our program.”

Having launched such a dynamic new gallery space within the heart of Mykonos town has undoubtedly shaped a new path for the island. Does the island’s booming reputation as a party destination threaten the new creative scene? 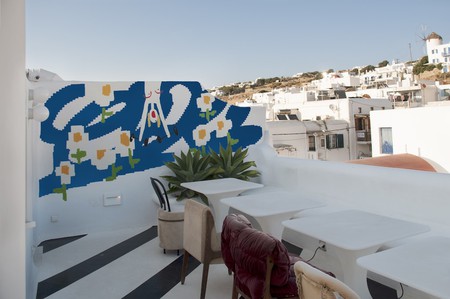 “I think that because the island has such a party reputation, when some creatives are doing a good job, they stand out. They are not threatened but celebrated and inspire others to join them.”

Such optimism seems to have proven right. Summer 2018 sees the inaugural Mykonos Art Festival, a new event that brings music, culture and art to the island throughout the summer months. The festival complements the Mykonos Biennale, which takes place on the island every other year. Thanks to the work of Vranopoulou and her colleagues, the Mykonos art scene is firmly back on the map.

Off-White, Dior and Gucci may have opened up stores in Mykonos this summer, but it is the movement towards making Mykonos a centre for Greek fashion, courtesy of a new Aesthet flagship store, that is the opening to watch. 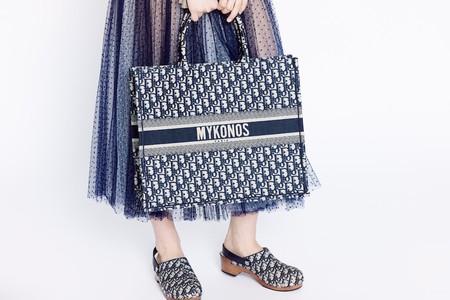 First launched online, the concept store in Mykonos promotes not only a mix of well-known Greek designers such as knitwear specialist Ioanna Kourbela, Ancient Greek Sandals, Zeus + Dione and Mitos Swimwear but also champions independent designers such as the cult handbag brand One and Only.

While small boutique stores have always been a part of the island’s makeup, the curation of Greek designers in Nammos Village puts them on a level playing field with their international counterparts. It’s only right that with Mykonos as a fashion destination, local designers should have the chance to shine.

Founded in 1995 by a French ex-model, Pinelies in Mykonos has long specialised in bringing unique design pieces to the island. Now run by Aristidis Theofilou, the second generation of the family, the store continues to offer original craftsmanship to international visitors and locals. 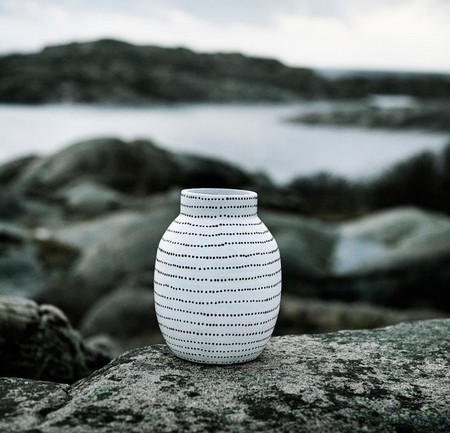 “Our contribution to the cultural style, as we see it,” Aristidis explains, “is to bring the best of the country to decorate our island.” Throughout winter, Aristidis travels across the world to hand-source unique pieces to bring back to the island.

Mykonos prides itself on originality, and such commitment to sourcing furniture, wall hangings and ceramics is a testament to the creative spirit of Pinelies.

The emphasis on slow and expert curation has clearly stood the test of time – an approach which has seen Pinelies become a must-visit design spot on the island. While, as Aristidis notes, DJs may have replaced hippies, Pinelies continues to foster the unique Mykonos spirit and show visiting audiences that the stories behind the pieces are as exciting as the objects themselves.

San Giorgio is “not just a hotel, but an experiment in leisure”, states the hotel on its website, and the results are certainly fascinating. Ingrained into the DNA of the hotel is not haute luxury with glossy Instagrammable pools (though you won’t be short of pleasing visuals here). Instead, the design is centred on traditional Mykonos craftsmanship, with Cycladic tones, natural light and plenty of unique furnishings. 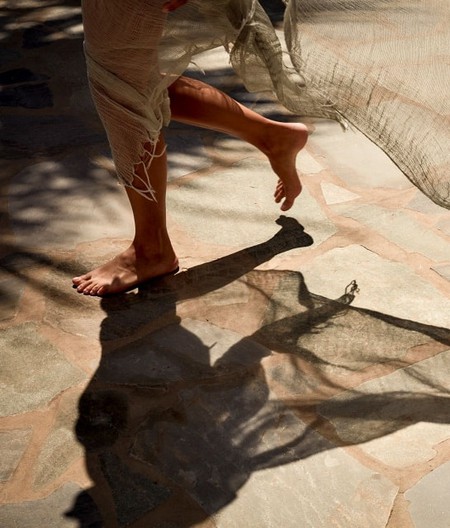 Founded by Thomas Heyne and Mario Hertel, the same duo who built Paradise Club into the successful super club it is today, the hotel set a new precedent for luxury hospitality on the island.

The emphasis is explicitly on art and culture. Food at the open-plan cantina is organic, gourmet and “predominantly vegetarian”, and guests are also invited to explore the Inner Gardens. It’s a new space designed for the “new generation of seekers” that provides meditation, talks, yoga workshops and massages free of charge for hotel guests. 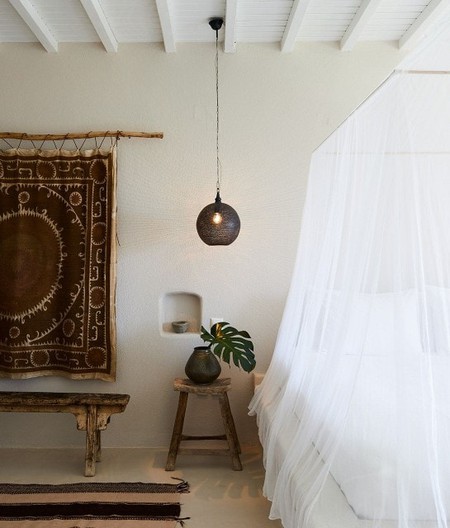 Meanwhile, the arts programme is described as “enlightened”. World-class DJs may play here, but the emphasis is more on community rather than hedonism. Such an initiative marks a radical departure for an island where demonstrating your wealth and pursuing exclusivity have become synonymous with its nightlife. In employing spiritual language and offering mindful initiatives while also providing the luxurious surroundings and service that visitors to Mykonos are accustomed to, San Giorgio proffers a new kind of Mykonos experience.

That said, the rate to stay at San Giorgio per night is over €700, making it one of the more extravagant places to rest your head on the island. Spiritual hospitality comes at a higher price. After all, this is Mykonos.