The Most Scenic Rail Journeys in Greece 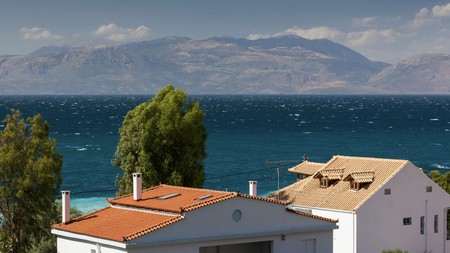 Greece’s rocky terrain and relatively limited rail network mean that train journeys are rather unpopular in the Mediterranean country. Yet if you look more closely, you will find a few rail routes that are more than worth the ride.

Boasting one of the oldest railways in Europe – its first line, connecting Athens with the port of Piraeus, was built in 1869 – it comes as a surprise that Greece doesn’t have an advanced rail network today. The Greek railways have suffered underinvestment and neglect for decades, while there’s only a handful of lines connecting major cities, next to a few international ones.

TrainOSE, the national railway company, has recently taken a few steps to revive the network by upgrading some of the tracks and trains. Still, it seems that the most scenic routes are the older ones, which take locals and tourists back to simpler times when trains were made of wood, and their sole purpose was to transfer goods. Passing through dramatic mountains or connecting ancient cities, the following routes guarantee a rail journey to remember.

One of the best ways to experience two of the most beautiful towns in the northern Peloponnese is by hopping on the train of the rack railway that connects the small seaside town of Diakofto with Kalavryta, a village on the slopes of Mount Helmos, which is popular for its ski resorts. This peculiar train is called Odontotos – meaning toothed – and is one of the few of its kind that still exists around the world. The construction of its narrow cog track began back in 1889. Inaugurated in 1896, the train was initially made of stone and wood, but was renovated just after the turn of the millennium.

Odontotos’s quaint carriages will take you on a 22km (14mi) journey running parallel to the Vouraikos river. The train soars from the sea level up to 750 metres high, hugging the Vouraikos Gorge; it follows it through tunnels and leafy pine and oleander forests, over waterfalls and along rugged cliffs. The ascent is so steep at some points that it wouldn’t be possible without the help of the rack and the pinions. The entire ride lasts a little over an hour, while drop-off stops can be made on-demand, so you can take in the scenery in all its glory. The service runs three times daily during weekdays and five times on weekends and public holidays. 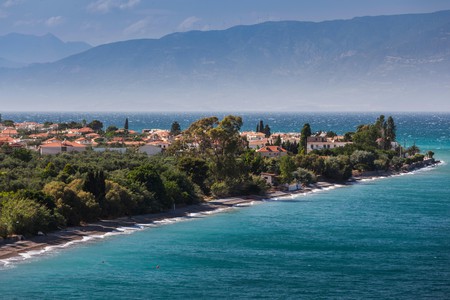 According to Greek mythology, the mountain of Pelion was the summer residence of the Olympian Gods; which makes sense if you take into account the abundant nature on its slopes, combined with its pretty villages. Somewhere amid plane, oak and pine trees lies a rail route that’s been around since the 19th century and promises to show you all that it’s fascinating about the mountain. Considered one of the narrowest in the world, this railway was constructed by Italian engineer Evaristo de Chirico (father of the great surrealist painter Giorgio) in 1897, in the hopes of enabling trade between the hilltop village of Milies and the coastal town of Volos.

The little train of Pelion, or Mountzouris, as it is known, closed down in 1971 but reopened as a tourist attraction in 1996. Its four carriages have been traversing the mountain ever since, initially running on a steam engine, which was replaced by a diesel one in 2010. The service now only operates between the villages of Ano Lehonia and Milies (a 15km/9mi route), with one stop at the village of Ano Gatzea. The train’s speed of just 20kmh allows for a leisurely, 90-minute ride through unspoilt forests, sprinkled with stone arched bridges and stunning views of the Pagasetic Gulf. You can hop on Mountzouris every Saturday and Sunday all year round. 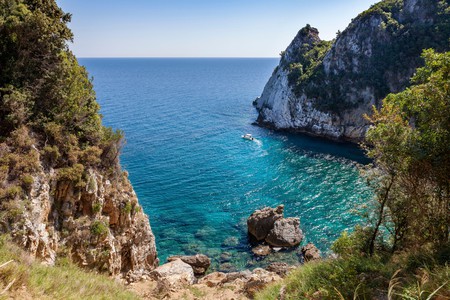 The rail line connecting the cute little port of Katakolo, in the western Peloponnese, with the archaeological site of Ancient Olympia was the first to be built outside of Athens back in 1882 – then intended to boost the commercial activity and exports of local products such as raisins. Passing through the city of Pyrgos, it is still one of the most scenic railway routes in Greece, bringing Katakolo’s understated beauty and Olympia’s centuries-old history together.

Take in the view of the forested hills surrounding Katakolo before hopping on a 45-minute ride to the past. Sacred ruins and endless greenery will keep you company as you make your way to the birthplace of the Olympic Games that date to the eighth century BCE; apart from the iconic stadium, Ancient Olympia is home to a museum brimming with precious artefacts from the era, and the ruins of the grandiose Temple of Zeus. You will also get to see the Gymnasium, the place where athletes used to train, and the Leonidaio, the lodging space for official guests and athletes taking part in the Olympic Games.

There’s one return trip between Katakolo and Olympia every morning and three between Pyrgos and Olympia, except for Sundays and public holidays. Alternatively, some of the boats moored at Katakolo can take you there for the day. 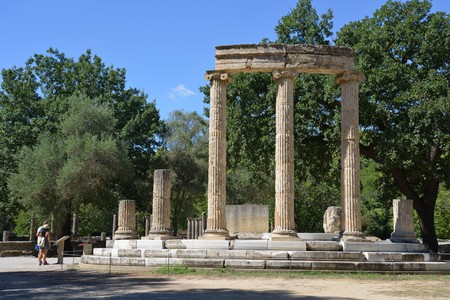 This short but amazing stretch of railway is part of the line connecting the cities of Thessaloniki and Alexandroupoli in northern Greece. The route from the municipality of Stavroupoli to the village of Toxotes passes through towering mountains and past the straits of Nestos river, making for a majestic journey. The area, a national park protected by international environmental conventions, is an important wetland home to eagles, waterfowl, otters, wild horses and other rare fauna.

The most charming part of the route passes through old stone tunnels and along the meandering stream; it only lasts for a few minutes, but some train drivers will stop on demand at the station in the abandoned Livera village and let you rest in the green valley for a while. Once you reach Toxotes, you can try trekking, horseriding or kayaking. The picturesque old town of Xanthi is also a few minutes away on the same route. 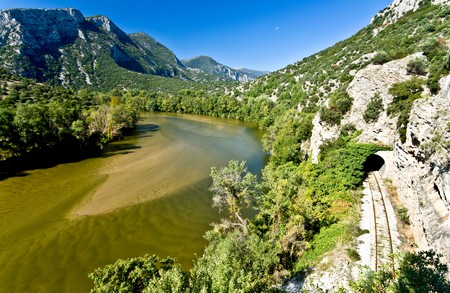