The Best Bars in Serifos, Greece 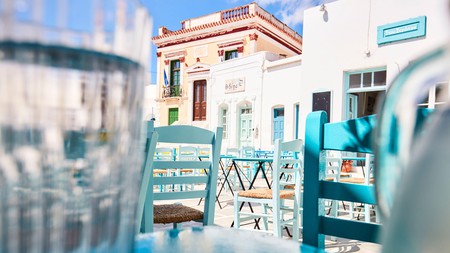 Chora: the charm of the Serifos capital is as clear as glass | © robertharding / Alamy Stock Photo

Discover the best bars in Serifos and sample it all, from creative experiments with modern mixology to Greek classics like retsina and raki.

Sleepy Serifos lies at the heart of the Cyclades, a two-and-a-half-hour ferry from Piraeus. Once home to a community of miners, the island is becoming a summertime hub for arty Athenians. These cosmopolitan visitors have introduced modern mixology to a drinks menu traditionally filled with wine, retsina and raki. Yet Serifos is still far from being a party place – most of its bars are in the capital, Chora, and the port, Livadi – leaving the island’s quiet character intact.

Opened in 1938, this whitewashed institution on Livadi waterfront is, by day, a laid-back kafeneio (a traditional Greek coffee house frequented by backgammon players). Come 7pm, it transforms into a no-holds-barred bouzoukia. Moor up and take your pick of the drinks – a rosé wine to match the sunset, or a punchy cinnamon-and-blood-orange cocktail to get you going. 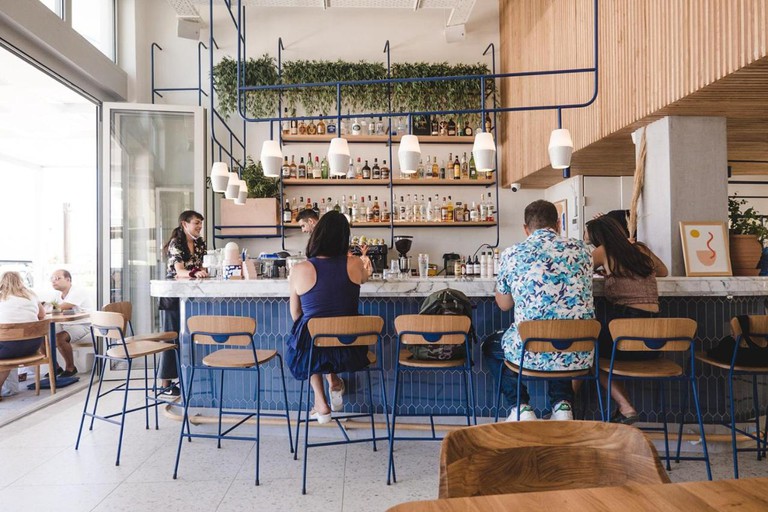 Courtesy of Chill & Co / Booking.com | Courtesy of Chill & Co / Booking.com
Around 200m (650ft) along the Livadi marina is Chill & Co, a newly revamped rooms-and-restaurant combo with a minimalist feel. A good mix of locals, digital nomads and tourists come here for the Grec-Mex fusion cuisine, which extends to its cocktails. Try an effervescent paloma with crunchy salt around the rim and taste the Serifos sea on your tongue (as well as refreshing grapefruit and lime).

Putting the closest thing Livadi has to a nightclub above a pizzeria and souvenir shop might seem unusual – but when you see the elevated view of boats bobbing in the harbour, it’ll make sense. This nautical-themed nightclub has creative cocktails – try the Hawaii-tinged lava flow, a tangy and pretty-in-pink pineapple concoction. Step indoors and dance to themed sets from Greek and international DJs until 6am; even Greek celebrities have been known to stop by.

It wouldn’t be a Greek island getaway without an afternoon spent sitting on the sand. At Calma on Avlomonas beach, you can chill on a deckchair with the sand between your toes and a margarita between your fingers. If you’re keen for something with a more local flavour, go for the souma: a type of bittersweet raki infused with saffron. It’s a heady moonshine, only for the brave.

Clambering to the hilltop capital Chora is thirsty work. Situated opposite the Folklore Museum, To Balconi is a rock‘n’roll taverna perfect for a cold one. Try the moschofilero white wine, a Greek-grown variety with zesty citrus notes. Alternatively, if you don’t like rocking riffs or crisp vino, just come for the Serifos panoramas from the namesake balcony – on a clear day, you can see as far as neighbouring Sifnos.

Chora’s historic piatsa (square) has a handful of popular establishments, but youthful Bátrachos is the bar you need. Its name means “frog”, explaining the hand-painted piece of amphibian street art staring at you by the reed-covered tiki bar. The signature cocktail is a minty affair, but try the “must-drink”, which is a dessert in all but name: chocolate and strawberry paired with rum and mastiha, a piney resin that’s one of Greece’s national flavours.

Hidden in Chora’s backstreets is Gaidaros, a spot that serves coconut-topped cocktails, bottled beers and tasty bar snacks. You’ll find tables on the rooftop, but if they’re taken, the throng of customers usually spills out across the alley. This is the proper Greek experience. See if you can sit at Le Cotecheri, a decorated street corner, to enjoy your drink under glowing fairy lights on a comfy swing seat. 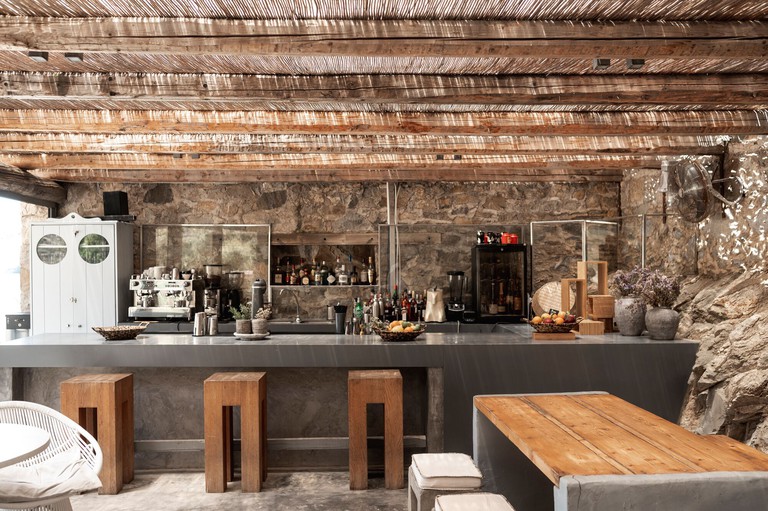 Courtesy of Coco-Mat Eco Residences / Booking.com
Set up by a luxury mattress company, the Coco-Mat Eco Residences are situated on the sands of Vagia cove. Though it’s described as a lounge, the hotel bar is more like a high-end industrial kitchen, complete with its very own herb bar, where you can pick aromatic herbs to customise your cocktail or tea. The menu changes depending on what’s locally available and in season — the hotel avoids artificial preservatives and sugars — so be prepared for a surprise.

Not sorted your stay in Serifos? Book one of the island’s best hotels now through Culture Trip. Discover more of the area by browsing the best things to see and do during your stay. Hungry for more? Go further and explore nearby Sifnos. Stay in one of the best hotels on the island, and take a look at the top things to see and do while you’re there.