Spectacular Places to Cycle in Greece

From Rogdia to Ag. Pelagia | © Grigoris Maravelias/Flickr
Greece has a mild climate and a plethora of landscapes and terrain for cyclists: mountain villages, lush forests, pristine beaches and ancient sites. While the islands offer many cycling possibilities, the Greek mainland also has many fantastic biking options, and is often overlooked. Here are some of the most spectacular locations to cycle in Greece.

The Wine Road of Goumenissa-Pella

Museum
Main entrance of Pella, Greece | Main entrance of Pella, Greece
The north of Greece is a rich wine-producing region. There’s no better way to combine a love for wine and cycling than with a tour along the Goumenissa-Pella wine road, where the xinomavro and negoska grapes are cultivated. Located north-west of Thessaloniki, the Goumenissa-Pella wine road winds its way through the northern part of Central Macedonia. You will pass lakes, gorges, ancient sites and vineyards, ending the trip in Pella, a town that replaced Aigai as the capital of the Macedonian empire at the end of the 5th century BCE. While in town, visit the archaeological sites of the city and its museum.
More Info
Open In Google Maps
Macedonia, Greece
View menu
Visit website
Visit Facebook page
Send an Email
Give us feedback

Park, Hill Station
Parnitha National Park offers over 75 hiking trails | © Tadej Perdih / Alamy Stock Photo
Mount Parnitha, 30 kilometers from Athens, is mostly known as a ski destination, but it is equally perfect for mountain biking enthusiasts. Boasting a network of marked routes perfect for all levels of fitness, the national park is home to over 40 mammal species, including foxes, hares, and deer. You can even cycle to Parnitha from Athens.
More Info
Open In Google Maps
136 72, Greece
View menu
Visit website
Visit Facebook page
Send an Email
Give us feedback

Greece’s second biggest island, Evia is a beautiful place for cycling. The 180-kilometer-long island has beautiful mountains, lush forests, ancient monuments, picturesque villages, and a winding coastline bordered by scenic beaches and small coves. Make your holiday a cycling vacation and explore this island, which, according to mythology, was the land of the Cyclops. 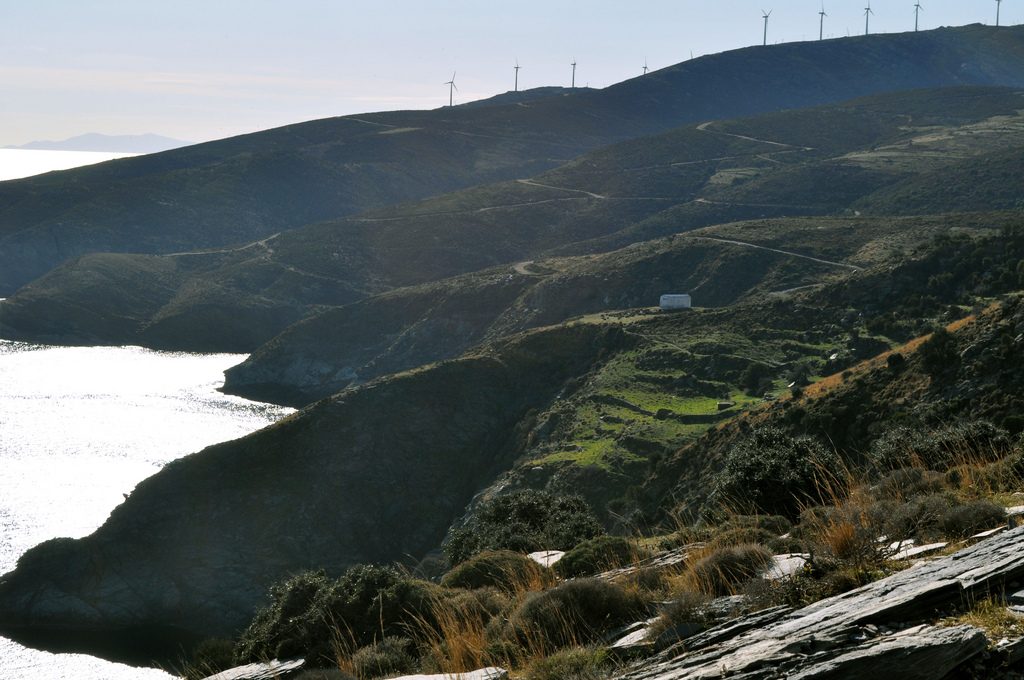 The Peloponnese is definitely an exciting region to explore, whether by car or by bike. For a scenic bike ride, the Vytina to Ladonas lake route is simply picture-perfect. This little haven in the heart of Arcadia takes you through lush forests, mountainous roads and lakes. The 105-kilometer route is not for the faint of heart and includes a few climbing challenges, but your efforts will definitely be rewarded.

The Road to Cape Sounio

Starting from Athens, the road to Cape Sounio is an 87-kilometer-long coastal route that takes you through the Athenian Riviera, all the way to the southern tip of the Attica Peninsula, where the Temple of Poseidon awaits. Depending on your time of departure, you may encounter a bit of traffic on Poseidonos Avenue, which connects the city to the southern suburbs. Once the traffic subsides, you will be able to enjoy stunning views of the Saronic Gulf.

Church, Park, Ruins
An historically rich region, the Macedonia region of Greece is blessed with dramatic landscapes and stunning scenery. One of them is the Prespa Lake complex, spread across 48.5 square kilometers, near Florina, by the Bulgarian border. The region is known as a hotspot for birdwatching, since the lakes are home to a wide variety of bird species. Whether you just want to ride and relax, or feel like exploring the neighboring villages where you can admire local stone houses and savor delicious fish, you are in for a treat.
More Info
Open In Google Maps
Greece
+302385051870
View menu
Visit website
Visit Facebook page
Send an Email
Give us feedback

Located in the center of the country, the Thessaly region is known for its natural beauty and for Meteora, the UNESCO-listed are where you can visit cliff-top monasteries perched on spectacular rocks. The monasteries are connected by a road, which is perfect for bikers. While the ascent may be a little bit tough, the view from the top is undoubtedly worth it.

If you’re looking for a cycling tour of Greece, check out Cycle Greece. This creative company offers a wide variety of guided or self-guided cycling tours, ranging from easy to advanced, in Peloponnese, the Cyclades and Saronic islands.

For relaxing cycling holidays, Evia-based Greek Cycle Holiday offers vacations for small groups of cyclists, including accommodation in a villa.

If you are vacationing in Lefkada, Get Active organizes mountain and road biking tours on the island or in Meganisi, another island nearby.

Biking in Voula © Andreas Kontokanis/Flickr
Give us feedback