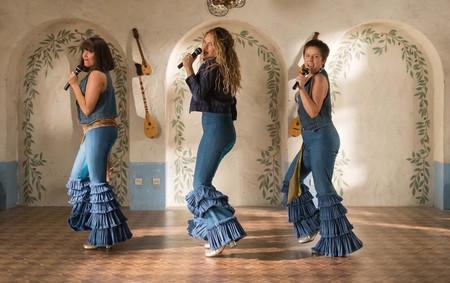 Young Donna and the Dynamos sing up a storm in 'Mamma Mia! Here We Go Again' | © Universal Pictures Home Entertainment

Culture Trip journeyed to the sunny Greek island of Skopelos to meet Lily James and Jessica Keenan Wynn, two of the stars of Mamma Mia! Here We Go Again, and chat about what making the movie meant to them.

Before you read any further, you should know that this story contains spoilers.

Exactly 10 years after the original movie, the cast of Mamma Mia!, along with a host of additional characters, return to the screen to revive the feel-good vibes with a new film, Mamma Mia! Here We Go Again. This sequel is set in the aftermath of the death of Donna, played by Meryl Streep. Sophie (Amanda Seyfried) has stayed on at the hotel and is renovating Villa Donna as tribute to her mother’s memory.

As we lead up to the grand opening of the hotel, we also follow the journey of Young Donna (played by Lily James) as she casts off the shackles of Oxford University and sets out on an adventure of self-discovery through Europe. Through flashbacks we see her eventually arriving at the magical (and fictional) island of Kalokairi to embrace a life filled with romance and fabulous dance routines. The second film strives for an emotional depth, emphasising the power of female friendship, the bonds of motherhood and the joy of women lifting each other up.

Culture Trip headed to the island of Skopelos in Greece, the setting of the original film and the location where parts of the second film were shot, to catch up with Lily James and her co-star Jessica Keenan Wynn (who plays Tanya, the young Christine Baranski character). The pair talked about the millennial resonance of the story and the strong feminist narrative at the heart of the film. 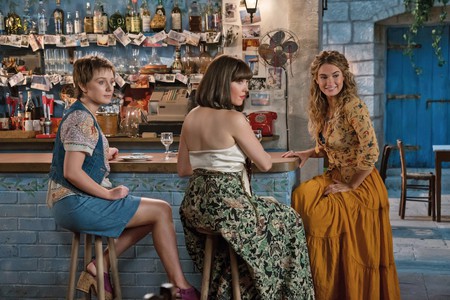 Culture Trip: What attracted you to the role?

Jessica Keenan Wynn: This is a dream job, a dream opportunity to follow in the steps of these brilliant, legendary actors, so when the opportunity came up there was no question – I mean, I probably would have done it for free.

JKW: You can ask what attracted you to it, but I think that the first film did its job. It was such a great movie and the themes were so joyous, and yet it really [goes] down different avenues of loss and confusion.

LJ: The story deepened in a way and is a celebration of motherhood and sisterhood. I think as an actor you don’t often get the chance to not take yourself too seriously. For everyone involved in this film it was an opportunity to just have fun and have a sense of humour and embrace this world of singing and dancing, and live in abandon. For all of us, in varying degrees, it was just heaven to give in to what Mamma Mia! is. Even Colin and Stellan did!

JKW: They put on their spandex!

LJ: One of my favourite moments in the film is when they each do their dance move. 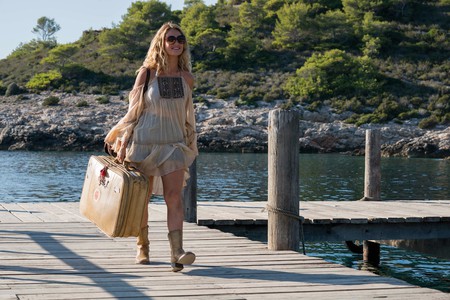 CT: In a way the story of a young woman going off the beaten path and embracing a journey of self-discovery felt very millennial. Was that something that appealed to you both?

LJ: Yes, living life to the max and travelling on your own. I was travelling around Italy this summer for a month, and I met this girl who was American and she was backpacking on her own. She had seen the film twice and she said to me, “Your film really inspired me to do it.”

LJ: Yeah, it was so cool! There is a sense – because we are playing the 20-year-old versions of these characters – that there is something that a younger audience can really connect to.

JKW: You look at this film and it’s a young girl going out being so spirited and unafraid. I think that was such a huge theme, and if that then penetrates the mind of the youth, then… 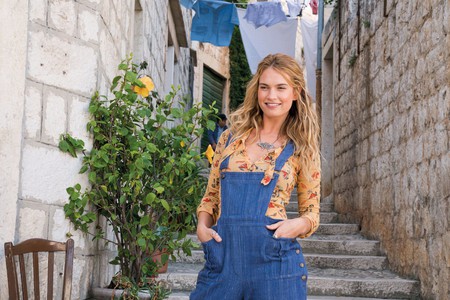 CT: There are many strong female characters in the film. Did it strike you as a feminist movie?

JKW: There are so many tones of female empowerment and friendship, and bonding and unity. It was so nice to see it across the board and match it on so many different angles and levels.

LJ: And to celebrate that in all its glory…

JKW: Because we need it. Especially now, in an age of social media, sometimes I find that people go down a path where they’re comparing themselves with women or they’re bashing other girls. In the end, we actually have so much in common and we have to lift each other up and be there for each other. We are on each other’s side; there’s no competition here.

LJ: We’re so much stronger together. In the simplest, corniest way, when I was learning the Donna and the Dynamo dance routines, when I did it on my own, you know, it was kind of cool. I was learning the moves. But when we did that dance for the first time together, we were euphoric! It was like we were an army and it was totally magnificent. That feeling of us girls being together. It was really amazing.

CT: You’re both playing the younger versions of two icons of cinema, Meryl and Christine. How did you prepare?

JKW: We both had the advantage of being fans of their work beforehand. So whether we knew it or not we had already been influenced by them in terms of maybe how they had shaped us as actors and as women. Christine has always been a part of my Rolodex of women who have influenced me. I was lucky enough that when I went into audition for this I felt that I already been studying her my whole life. We didn’t spend a lot of time with them beforehand and I mean, how daunting would it be if they had said, “Here’s some advice for you – X, Y and Z, so make sure you hit that!”

LJ: They just let us own it. I’ve found that in most of my working life when I’ve thought, “Is this person going to give me a piece of advice?” actually often the advice is just letting us do it. That respect that we’re all at a different point in our journey. I think that the best thing as an actor is just being observant. You’re watching people your whole life, and what they do. 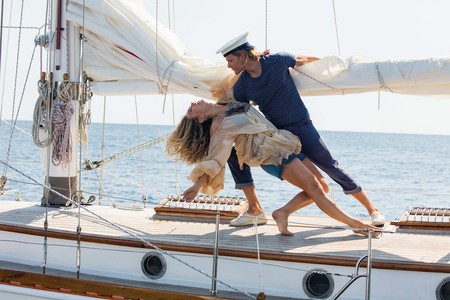 CT: What was the most surreal moment of the film?

LJ: There was endless surrealism!

JKW: The final dance routine was mine. We were all in the same film, but it felt like we were doing mini versions. So ‘Super Trouper’, when we’re all doing that last bit together, and we’re pointing up at the lights…

JKW: And it was friends-and-family day on set, and there were so many people there watching and crying…

JKW: That was really surreal…

LJ: Especially because everyone’s dressed in sparkly costumes, you know?

JKW: It was a celebration of the film. It boiled down to that moment. Truly. Even watching it I go, “We did that!”

LJ: Also I remember in Stockholm, before the film started, I went to record all of the songs. I remember looking through the glass window and seeing Benny and Björn sat there and thinking, “What is happening?” One of the mad things about being an actor is that literally one phone call happens and suddenly you’re in this whole new world with people you’d never dreamed of being in the same room with, yet alone working with. Things can just change in an instant.

Mamma Mia! Here We Go Again is available now on digital, and on 4K Ultra HD, Blu-ray and DVD from 26 November 2018 from Universal Pictures Home Entertainment.