7 Traditional Greek Dances You Should Know About 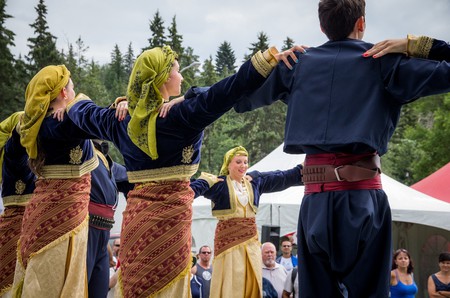 In a country where folk dances are as alive today as they were in ancient times, Greece counts over 4,000 traditional dances spread across all regions of the country. Some dances are also known outside the Greek borders and were brought to many corners of the world thanks to the vast Greek diaspora. With the social function of bringing the community together, traditional dances are usually performed at weddings, baptisms, births or name days, or festivals and holidays such as Easter. Here are seven traditional Greek dances you should know.

Sirtaki, also spelled syrtaki, is probably one of the most famous Greek dances known around the world. However, few people know that sirtaki only dates back to the 1960s. In fact, eminent Greek musician Mikis Theodorakis created the dance for the movie Zorba the Greek. By alternating slow and fast steps from the hasapiko and hasaposerviko dances, sirtaki was born. Its most famous characteristic is the acceleration, moving from a 4/4 tempo to a 2/4 pace. It is danced in a line or circle formation, with hands placed on their neighbor’s shoulders.

The hasapiko is a traditional dance with roots from Constantinople. It originated in the Middle Ages as a battle dance that butchers used to perform with swords. The hasapiko, which serves as the inspiration for the sirtaki, is a dance that progresses from a slow to a faster pace, which is called hasaposerviko, or Serbian hasapiko, which refers to the Balkan influences of the fast-paced version. The hasapiko is performed in a line or open circle formation, with each dancer putting their hands on their neighbor’s shoulders, just like in the sirtaki.

A popular folk dance known throughout Greece and Cyprus, the kalamatianos is danced in a circle, with dancers holding hands. A festive dance, the kalamatianos has roots that date all the way back to antiquity, in the early writings of Homer, while the name derives from the city of Kalamata, located in Southern Greece. But don’t let the name fool you, as the kalamatianos is actually a Pan-Hellenic dance and is considered the national dance of Greece.

Very energetic, the pentozali is a fast-paced dance that originated in Crete. Involving a line formation where dancers hold onto one another at the shoulders, it is led by a lead dancer who can perform variations as she/he pleases, while the remaining dancers follow the basic steps. While the tempo is rather moderate at first, it progresses into a faster pace, which is translated into more intricate moves from the lead dancer.

A dance strictly performed by men in the past, the tsamiko (or kleftiko) is another Pan-Hellenic traditional dance, popular in Peloponnese, Central Greece, Thessaly, and Epirus, where a slower version exists. Following a strict tempo, the dance doesn’t focus so much on basic steps but more on the attitude of the dancers, placed in a circle formation and holding each other’s hands at a 90-degree angle, with the lead dancer performing leaps and squats, depending on the melody and rhythm. When both women and men dance the tsamiko, it includes a “double banister,” with men (usually in foustanella) dancing in the outer circle, and women in the inner circle, or a simple ring where one male dancer is followed by a female dancer and so on.

Part of the nisiotika (nisi, means island) dances, which contains dances and songs from the Aegean islands, the ikariotikos is a traditional dance from the island of longevity, Ikaria, in the northeastern Aegean Sea. While the dance was, in the beginning, a slow dance, the modern version of the ikariotikos is much faster. Performed in an open circle by men and women holding hands at shoulder height, the dance includes three parts. In the first, dancers perform slow walking steps, while in the second part, the pace quickens to reach the third section, where the quick steps showcase the agility of the body and legs.

Contrary to most of the dances presented here, the zeibekiko is not a dance performed in a group and is, therefore, a difficult dance to learn; it doesn’t have any particular steps to follow, only certain figures. Originally a dance performed by two armed men facing one another, it slowly developed into an improvised dance for men. Also known as the “eagle dance,” the zeibekiko is performed with arms open wide and has a strong intensity. Today, the dance has lost a bit of its tragic aspect and is performed by men (and sometimes women) at weddings and other social gatherings.