Exploring the Art of Gibraltar: An Interview with Christian Hook 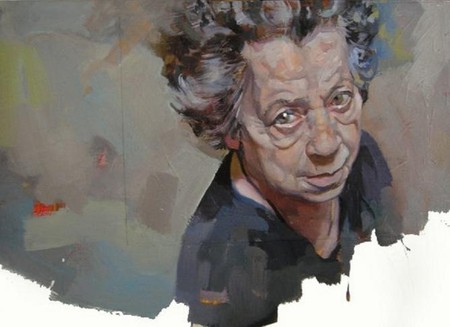 Christian Hook is an award winning artist, musician and arts teacher. He teaches Art at Westside Comprehensive Girls School Gibraltar, which has helped in keeping his creative mind agile and diverse.

From a very young age he has had an eye for seeing the world from different perspectives, and for being able to appreciate and interpret these differences in his work.

His pieces are semi-realistic expressive illustrations of the world around him. Moments are captured as if viewed through an old film reel where you can imagine the mechanical ticking sound of the spinning spool. They reflect life with a certain energy that captures emotions and the atmosphere, making them more than just two-dimensional. 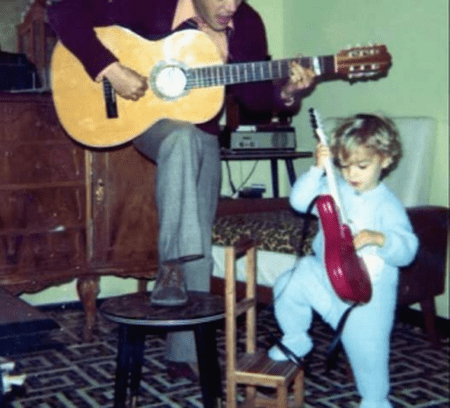 Tell us a bit about yourself and how you first become interested in the arts.

I was born in Gibraltar in 1971. My father was very interested in music and played the guitar quite often during my primary years. I think it was at this very early stage that I developed an interest in the creative subjects. I was always fascinated with the human ability to come up with something from nothing. The birth of physical matter spawned from initial inception in the imagination.

Tell us a bit more about how you developed your creative imagination?

As a school boy I was always into the arts. I later developed my skills and went on to study arts at London’s Middlesex University where I graduated as an illustrator. I spent the next six years working for multinational publishers including Disney, Reader’s Digest and Marshall Editions. I found my formative years as a student very useful in this field of work and it was all thanks to Jonathan Potter and Collin Ratray who taught me many traditional technical skills, which now seem to have been somewhat lost over time. 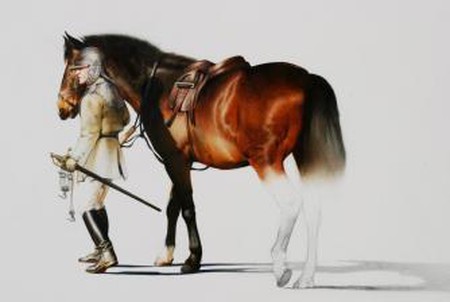 After a few successful years in business I became a part time lecturer at the Royal College of Art where I taught illustration and painting techniques to an MA level. 200 books later, I left my career as an illustrator in order to pursue my passion for the fine arts. I tried a variety of things before that, including stamp design, architectural reconstruction with 3D animation, music and abstract work. All of which presented me with new opportunities. However, my love for painting haunted me for a long time and I ended up increasingly involved in my own personal development in fine art painting.

My diminishing interest in subject matter became more apparent as I worked, and with that came a growing interest in motion and everything that happens in between events. We are always on the move, if not physically, mentally. This thought has fed my inquisitive nature ever since. I guess Cézanne must have had that same thought when he decided to break up his paintings and look at subjects from a multitude of angles.

Antonio Lopez had something similar happening in some of his work. Sometimes he took so long to paint a scene; that by the time he finished the painting many things had changed in the landscape, so his paintings became like time machines. They captured a place during five or ten years. I love the concept of time in many different ways. 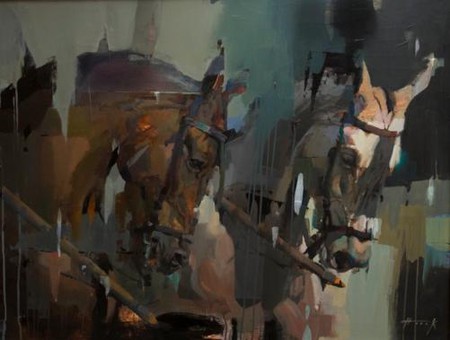 Talk to us a bit about your current work; at the moment you are working on some equestrian paintings, can you describe your interest in this subject matter?

Horses are a good subject to explore transient moments in motion although I must admit I have recently lost interest in subject matter and have become absorbed by what occurs in between the layers of paint. Like a sandwich, some layers cover whole areas while others leave spaces we can see through.

Who has been the greatest inspiration in your life?

The greatest inspiration in my life was the late William Hook (my grandfather) He always had his own way of doing things and a strong personality. He always came up with really creative and exciting stuff while my brother and I were very young. I was once in two minds whether to buy a convertible or not. As it happens, the insurance was a lot more expensive. I was pretty young then and would have used up all of my savings. My whole family was trying to steer me away from the idea so I took my granddad with me to see the car. When we got there I asked him. ‘Well then, what shall I do?’ and he said ‘Well obviously buy it. You only die once’. 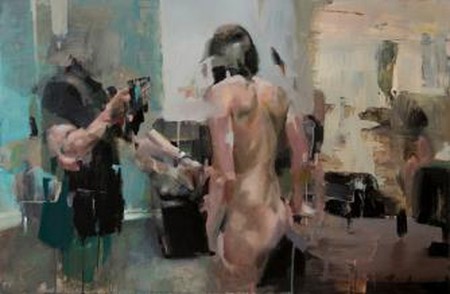 Creative minds often go through that process of studying other people’s work. Which artists’ works are you influenced by?

I have always been strongly influenced by musicians. Sting, The Police, The Script, Kings of Leon and Coldplay. They have all been a great influence in my own music. I am currently finishing my third album on a project called Mr Darcy. Music has changed the way in which I view art and my paintings. The importance of space, movement, timing and harmony has slowly crept into my work making it the driving force in my painting.

In the fine arts there are many artists which have influenced me and I admire: Cezanne, Antonio Lopez, Rothko, Freud, Bacon, Auerbach, Uglow, Diebenkorn, Terry Winters, Brice Marden, Nan Goldin, Gerhardt Richter and many others.

For more information and to see more of Christian Hook’s work visit: