EUROPE
/
GERMANY
/
DRESDEN
/
Things to Do

The Cabinet of Wonders: Mathematisch-Physikalischer Salon in Dresden 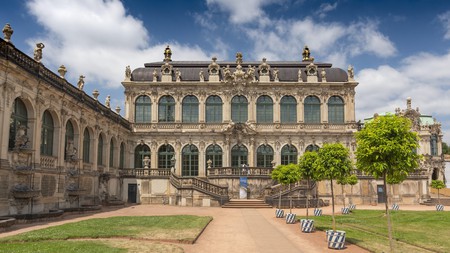 One of the oldest museums in the world is contained within a grand rococo-style manor in Dresden. The collection amassed by the Electors of Saxony is a fascinating display of mechanical and scientific instruments ranging from 16th-century automata to superbly crafted telescopes.

Despite its rather cumbersome name, the Mathematisch-Physikalischer Salon (officially The Royal Cabinet of Mathematical and Physical Instruments) is a remarkably small yet fascinating museum located in the Zwinger in Dresden. It is, in fact, one of the oldest museums in the world, having been established by Augustus the Strong (King of Poland and Elector of Saxony) in 1728. The Electors of Saxony collected everything, not just paintings and sculptures. The musical instruments in the collection are works of art in their own right, and functional, too. For much of its history, the Mathematisch-Physikalischer Salon used the meridian running through the building to accurately calculate the time by observing the transit of the sun. While much of the collection includes scientific items, some of the earliest objects include some amazing mechanical devices produced simply for entertainment.

The museum’s home, the Zwinger, is a Rococo extravaganza built by Augustus the Strong between 1711 and 1728 – he wanted to have something as spectacular as Louis XIV’s Versailles. The glazed galleries around the courtyard were originally built to be orangeries, however, they were soon turned into display galleries and museums, which included the Mathematisch-Physikalischer Salon.

The first room, The Cosmos of the Prince, contains items collected in the 16th and 17th centuries, such as clever mathematical devices. The mathematical instruments were created as precision tools for the mining industry, including astronomical devices for maritime navigation, ballistic machines for military deployment and even the oldest mechanical calculator in Germany. The museum’s collection of automata draws a lot of attention from visitors. These objects contain spectacularly complex mechanisms.

There is a bear that beats a drum as an alarm clock – its eyes roll to let you know when the mechanism is in use – alongside an elaborate cabinet with figures that dance in and out of a highly decorated hall. You cannot see the automata in action, but instead, there are videos allowing you to witness them in motion, as well as films which explain the complex mechanisms.

The room of telescopes, Instruments of Enlightenment, is simply a treasure trove of highly beautiful objects. These are complex scientific instruments that represent what was the cutting edge of technology in the 18th century. The collection was damaged during the war, and one of the losses was a large reflecting telescope which was a gift from King George III of Great Britain – only the large concave mirror remains. The devices used to measure time via the transit of the sun across the meridian are here, too.

The next room, The Universe of Globes, is lit purely by artificial light to help preserve the historic globes on display. Two of the biggest were printed by the maker who created globes for Louis XIV of France. The Electors acquired two of his printed globes in the 18th century, supplied as flat printed material to be fastened to globes, though they did not get round to doing this until the 19th century. The results are still impressive with the globes nearly two metres (6.5ft) in diameter. Also on display are early marine chronometers, produced just after John Harrison’s revolutionary solution to the problem of measuring longitude in the 1760s.

The final room, The Course of Time, displays historical timepieces right through to modern watches. There are also small automata, with mechanisms based on the same techniques used in pocket watches, including a mechanical lobster from the 16th century and a Turk riding a horse. The clocks include decorative 19th-century pieces, as well as more elaborate mechanisms such as the long case clock which plays tunes based on a series of rolls produced by local craftsmen.

The Mathematisch-Physikalischer Salon is a remarkably absorbing institution, and with only four rooms, it’s just the right size. All of the explanations are in German and English, and there are plenty of videos and opportunities to be interactive. Perhaps the collection’s greatest joy is the way that the objects manage to combine scientific inquiry and fine craftsmanship so that they become works of art in their own right.