The 10 Most Delicious Georgian Delicacies You Need to Try 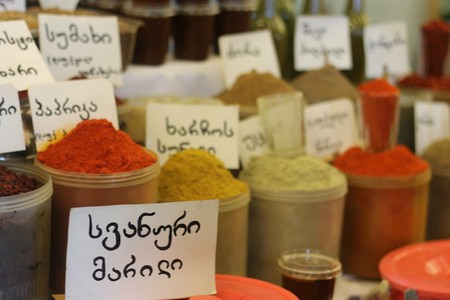 Spices sold at the Tbilisi market | © Sarah May Grunwald

Anyone who has been paying attention to the latest food and wine trends has surely noticed that Georgia is an up and coming region which food and wine lovers the world over are embracing. The country, in the heart of the Caucasus, is home to a delicious array of ingredients; these elements coupled with influences from the Mongols, Persians, Turkish and Russians, have meant Georgians consistently create some of the most interesting food in the world. 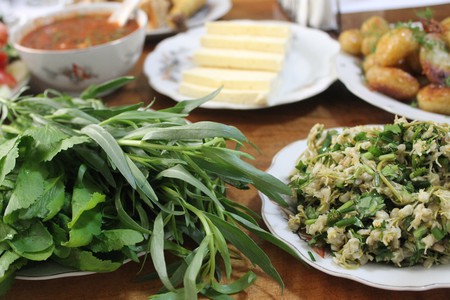 Photo by Sarah May Grunwald

Though it’s a small country, Georgia’s regional cuisine is diverse. Food ranges from quite spicy in western regions like Samegrelo or Guria, to the more reserved kitchen in the east. All dishes are complemented with Georgian wine – quickly gaining an international reputation for exclusivity. Georgia sits smack dab in the centre of an area which has over 8000 years of winemaking history under its belt. It is no wonder that wine is imperative to the Georgian table. It’s their very identity.

With so much variation built upon local, seasonal ingredients, at first the Georgian kitchen may seem daunting. Below are the best Georgian delicacies to try; these you will likely find in a Georgian restaurant abroad and of course, around Georgia itself.

This literally translates as ‘cheese bread’ and it is an essential part of the Georgian food experience. There are regional variations to this dish ranging from the imeruli khachapuri, which is a baked cheese pie (often called ‘Georgian pizza’), to the very photogenic and calorie-laden khachapuri adjaruli, a bread boat that is filled with sulguni – a brine fermented cheese – baked in a wood oven, and served with a pat of butter, and a raw egg cooked by stirring it into boiling, hot, gooey cheese – perfect hangover food.

These are the famous Georgian soup dumplings whose pleats take years to master. Filled with broth and meat, or mushrooms, their shape is a relic of the Mongolian invasions. Originating in the mountain region of Kazbegi, they can be found throughout the country, and in Tbilisi there are khinkali houses (restaurants which specialise in the dish). Georgians take khinkali eating to athletic levels, ordering as many as they can bear. The dumplings are always eaten by hand, by taking the knob at the top, taking a bite from the bottom and letting the soup rush into your mouth. Finish and repeat. He, or she, with the most knobs left on the plate wins. 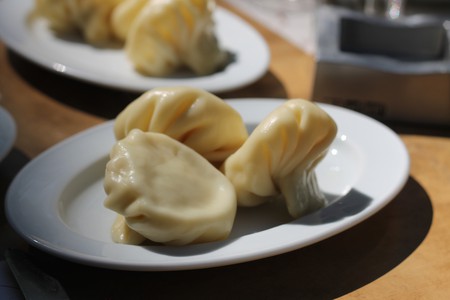 In a nutshell, lobio are stewed kidney beans in various incarnations, such as stewed beans accompanied by herbs, cold bean-salad, bean stew served with the leftover khinkali-skin and so forth. The dish is usually served with Georgian corn bread and pickles. Another bean-filled treat is the khachapuri alternative, lobiani – bread filled with beans rather than cheese. It’s common to have these beans served with walnuts on top.

In short – eggplant rolls with walnut paste. Pretty much a staple on the Georgian table and easy to make. Long strips of fried eggplant with a delicious garlic and walnut paste spread over them. They can be left unrolled, or are sometimes shaped into cylinders; usually they’re topped with a few pomegranate seeds for a final touch of tartness.

These are vegetables or walnuts balls made using aromatic herbs and Georgian spice-blends such as khmeli suneli. They can be made any time of year using seasonal vegetables. The most common are made from spinach, and go really well with a delicious puri (bread).

If you go to any market in Georgia, you’re bound to see tables full of bottles containing this green or purple condiment. Tkemali is a sour sauce made from sour plums, garlic and aromatic herbs such as cilantro and wild mint. It is the perfect accompaniment to meat and potato dishes.

Georgia is awash in pickles. Pickling preserves vegetables for consumption past their season, as well as providing us with much-needed gut flora. In Georgia, you’ll see pickled peppers, garlic, beets, and jonjoli (bladdernut flowers). They are a great light accompaniment to heavy Georgian dishes and create many of the aromas and spices which make the Georgian table so distinctive. 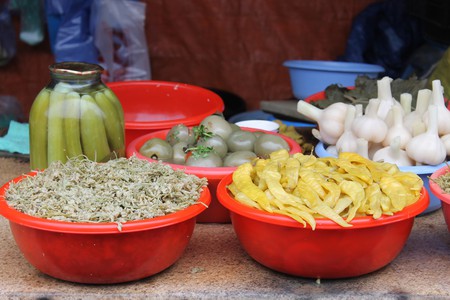 Georgian pickles at the Tbilisi market photo by Sarah May Grunwald

Churchkhela is the extremely photogenic Georgian snack that look like sausage, no food photograph epitomises Georgia more than churchkhela. It is often called a candy, or ‘Georgian snickers’, but it’s far from being a heavily-processed sugar-laden candy bar. It’s made at harvest time, with grape must, nuts and flour, and can be preserved for months. To create it, grape must is boiled and then thickened with flour; strings of walnuts or hazelnuts are dipped repeatedly into this concentrated grape juice and then hung out to drip dry. This was a traditional food used by warriors and knights for sustenance when travelling for a long time as they are easy to transport and packed with nutrition. 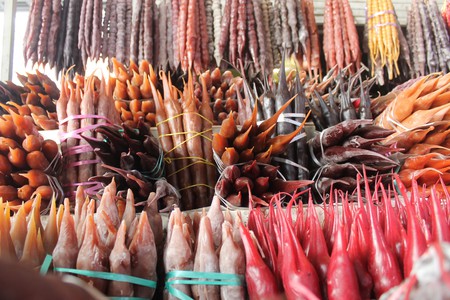 The ubiquitous Georgian snack Churckhela photo by Sarah May Grunwald

A Georgian hot, spicy condiment made with hot peppers, garlic, herbs and spices that varies regionally. Most agree that it originated in the breakaway region of Abkhazia, and Georgia’s best comes from there, or from Samegrelo. Once you taste it, it becomes an obsession. The condiment varies from being a sauce, to a dried salt, to a thick paste and can be used as a accompaniment to any dish, or used while cooking. If you ask a Georgian for their adjika recipe, you will rarely find the same one twice. The most authentic is a paste made with walnuts – it’s hot, sometimes a tad sour and quite aromatic.

Georgia is one of the world’s oldest wine making countries, with more than 8000 years of unbroken winemaking history. Wine is central to the Georgian table; it is the pride of Georgian identity and its production has survived in its original form – the qvevri tradition. The qvevri is an egg-shaped clay winemaking vessel that has been recognised by UNESCO as Intangible Cultural Heritage and has been used in wine production since the beginning of its illustrious history. There are many different kinds of wine made in Georgia, but it’s the amber tinted wine, created by making sure the juice from the grapes has contact with the grape skin, that stands out and pairs perfectly with an array of dishes. This wine is celebrated in toasts, used in rituals, and consumed in copious amounts. 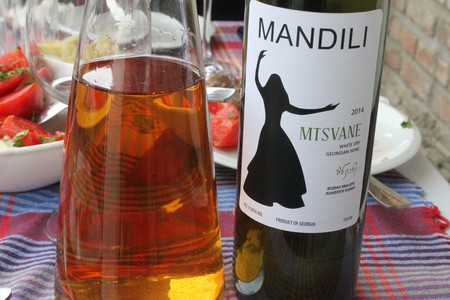