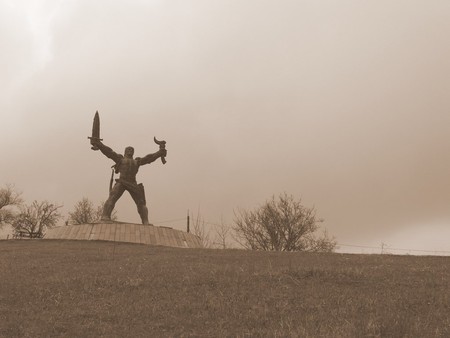 Georgia is a country of legends. Its legends and myths have mainly been preserved as famous tales. Many of them merged with Christian legends after the Christianisation of the country in the fifth century. However, Georgia didn’t convert to Christianity all at once; the lowlands embraced Christianity at first, while the highlands of the Caucasus mountain range were converted ten centuries later. Here are 8 interesting myths and legends that Georgia holds dear.

According to the legend, the area of present-day Tbilisi was covered with lush forests without any inhabitants as late as 458 AD. This is the date old Georgian records indicate as the establishment of the city by King Vakhtang I Gorgasali of Iberia. 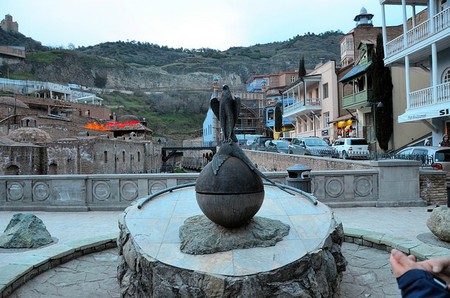 The King went hunting in that heavily wooded area with a falcon. The falcon caught a pheasant, but struggled and both both birds fell into the nearby water. When the King and his army looked for the birds, they discovered the water was hot, and the birds had boiled. He was so impressed with the discovery that he decided to build a city.

The name of the capital comes from the old Georgian word, Tpili meaning ‘warm’. The whole name Tbilisi translates to ‘warm location’ in English. This is due to the various sulfuric hot springs in the Abanotubani district.

Fourth glass is of a devil

This legend, involving wine, has remained in almost every corner of Georgia, including the mountain valleys, where wine culture never developed. When God lived on earth, he decided to make life easier for those who were driven out of heaven and forced to work hard on Earth. After a long time of thinking, God decided to create a beverage that would let people go back to heaven for even a short time. He invited all the angels and the devil to taste his creation: wine.

Everyone liked wine, including the devil, but the devil felt obligated to compete with God. So, the devil created chacha, a potent alcoholic drink made from the remains of crushed wine grapes, and invited God to taste it. God drank one glass of chacha, then a second, a third and a fourth. After the fourth, he said to the devil, ‘Those who will drink three glasses of chacha may be on my side, after the that, they are yours’.

When older members of the Tianeti community drink at a feast, they call the fourth glass of chacha or wine, ‘of a devil’ and move on to the fifth glass quickly.

St George of Mukhura and Devi (the giant)

Once when St George lived on the earth, he visited Mukhura village in the Imereti region. Many giants (Georgians call Devi) lived there. When St George decided to go hunting, he notified his deacon not to open the door of the church to anyone until that person put his or her ‘pinky’ finger through the eyehole. The deacon acted accordingly, and when he saw the hairy baby finger of a giant at the eyehole of the church door, he didn’t open the door and screamed for St George to help him. 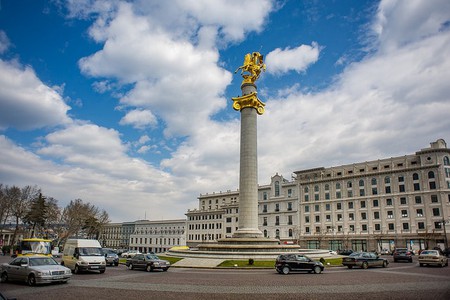 The saint at that time was near the sea. When he heard the voice of the deacon, he took a big stone and threw it at the giant. He had so much strength that he missed the giant, and the rock flew over Mukhura and fell somewhere near Baraka village in the Racha region of Georgia. He immediately went to Mukhura and defeated the giant. He kicked the giant with his foot and threw him in a ravine along with several timber logs. On the place where the giant fell, a lake appeared, which locals began to call Devi Lake.

During the drought days of summer, the inhabitants of the village come to ‘heave the water’. They throw stones in the lake and ask for rain. It is believed that the rain will come after this ritual.

The oldest ancestors of the Georgians firmly believed that the number of stars in the sky was proportionate to the inhabitants on the planet. Every man had his or her star of fate, which protected the individual. The Georgian saying ‘born on a happy star’ comes from this belief. When a star fell from the sky, people would say that a person had died. Everyone respected their own star, their guardian angel that always treated them fairly and protected from evil forces.

According to Georgian belief, fiends lived among men. They looked like people, but were actually witches, goblins or demons in disguise. They never slept. They tried to spoil things for people, and when they were victorious, they were extremely happy. According to old tales told by wiser generations, those fiends should not see a naked child in the morning before breakfast. Otherwise, the child would be cursed with weakness, and the enemy would plague him or her easily.

Chiakokonoba is an ancient Georgian ritual that used to be held on Fat Thursday or a day before it. On this day, it was believed that fiends would ride wolves and stroll the streets harming citizens or spreading rumors about horrific wrongdoings against neighbors in the middle of the night. The festivity, which consisted of building strong fires against the fiends, was very popular in Georgia. Children gathered straw and wood to set up fires in the streets. They put long stakes in the fields and decorated them with crosses and thorn crowns. They believed that when fiends looked at the stakes, their power disappeared. In the evening, people gathered around the fire, sang songs and danced. Every single person was supposed to jump over the bonfire at least once to weaken the power of the fiends.

Ochopintre was a half god, who lived in the woods and high cliffs. He had a goat’s horns on his head and furry legs. His footprints looked like a small child’s footprints. Due to his cheerful character and love of animals, St George made him guardian of shepherds, animals and beasts.

Ochopintre took care of the forest with great passion. He was often invisible to people and loved to appear in the form of a shepherd among villagers. He looked after the animals and took special care of roe and deer. Ochopintre hated when hunters would hunt without his permission. He punished them cruelly for it. Once, a hunter killed a young roe, which made Ochopintre very angry. He cried out, ‘Why did you kill it?’ In his rage, he instantly blinded the hunter before the man could answer. This legend still lingers in some Georgian hunting rituals.

A childless couple once lived in a small village. The man was a hunter despite the fact that he was blind in one eye. Once, when he was hunting, he heard a scream from a woman in a cave of crystal rock. When he entered the cave, he witnessed the goddess of the forest, Dali, in labor.

At the request of Dali, the hunter cut her stomach with a golden knife and birthed her baby. When the hunter said it was a boy, the goddess replied to take it with him and name the baby Amirani. She also noted that Amirani would become a hero, and he would have been stronger than God if he hadn’t been born so early.

Her words came true. Amirani grew at an incredible speed and became stronger each day.

Amirani did many good deeds. Giants, fiends, and dragons were afraid of him. They envied the excellent relationship between Amirani and the people. One day, they went to God and told him that Amirani had become stuck-up. They said he was merciless with the people and he bragged of being able to compete with God himself. God got angry and came down to Earth to punish the hero. He chained Amirani to a cave and surrounded him with glaciers.

Amirani has been there ever since. The ravine delivers bread and a cup of wine to him each day. His loyal dog remains with him to lick the chain and help him escape. But every Thursday, blacksmiths work to strengthen the chains again. Once every three years, the cave door opens, and when Amirani sees the world, he tries to break the chain.