The Paris Of The French New Wave: Then And Now 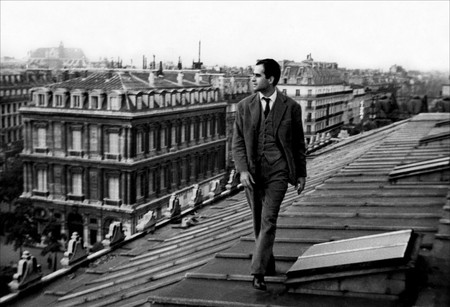 The French New Wave describes the cinematic renaissance that occurred in France between 1959 and 1969. For ardent cinephiles, the movement is more accurately defined by the early films of five critics-turned-directors: Truffaut, Godard, Rohmer, Chabrol, and Rivette. However, complementary to these were modernist works by Resnais, Varda, Marker, and Demy of the Left Bank group. At the time, the capital was also home to filmmakers like Louis Malle whose aesthetics and methods were (for the most part) quite different. Importantly, all of these directors made a break with the encumbered, impersonal filmmaking of the past, choosing instead to get out into the streets and create art in their own, intimate style. In doing so, they produced characters and innovations that inspired future generations and opened up a window into the past for us, the lucky inhabitants of Paris today.

Truffaut’s debut film, The 400 Blows, is most people’s introduction to the French New Wave, and is widely considered to be one of the greatest films of all time. It is the semi-autobiographical tale of the delinquent adolescent Antoine Doinel, whose life story would feature in four more of Truffaut’s films. In the scene below, we can see Antoine and his friend running across a terrace in front of the Sacré-Coeur in Montmartre, a spot which today is filled with tourists and itinerant tradesmen selling everything from keyrings to bottles of beer. 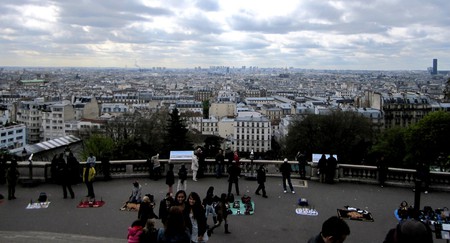 Les Cousins was Chabrol’s second picture after 1958’s Le Beau Serge, and the two are considered by some to be mirror images of one another. The story follows, of course, two cousins, Paul and Charles, one a playboy and the other a naïve law student newly arrived in Paris, and draws heavily on Hitchcockian themes. Below, the pair are enjoying a drive around Paris in a convertible. Unfortunately (for them), today’s sports car drivers on the Champs-Élysées more often fall foul of the city’s congestion problems. 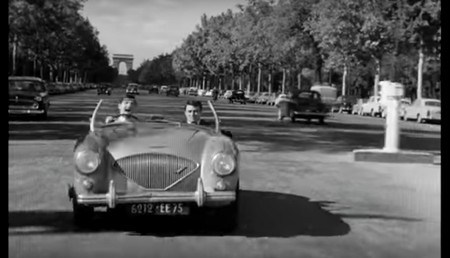 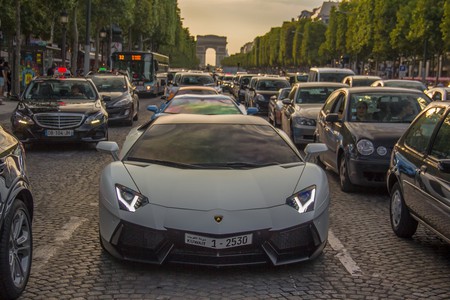 Sports car stuck in traffic on the Champs-Élysées │ | © Ben

Godard’s first feature, Breathless, hit cinemas within 10 months of The 400 Blows and, along with Alain Resnais’ Hiroshima, Mon Amour (1959), they are considered to be the most influential of the movement. In the final scene of the film (which, yes, will leave you short of breath), Jean Seberg chases after her criminal lover, played in his breakthrough role by Jean-Paul Belmondo, who has just been shot by the pursuing police. The surface and the parked cars may have changed somewhat, but the building at the end of the road remains unchanged. 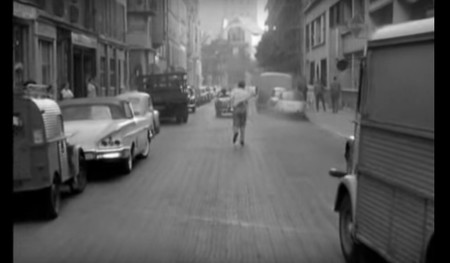 Still from A bout de souffle by Jean-Luc Godard (1960) 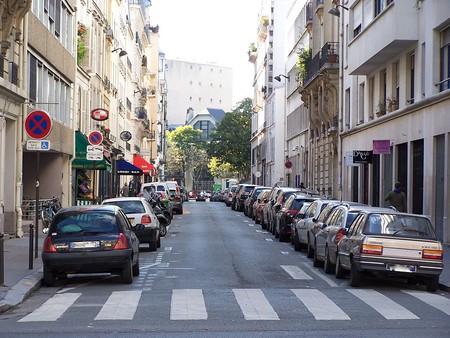 Paris Belongs To Us, Rivette’s first full-length movie, took years to make due to a lack of funds and wasn’t popular with French audiences on its release. Nonetheless, it introduces themes – play rehearsals, mysteries, and conspiracies – that sustained the director through a five-decade career. The roof that you can see below belongs to the Théatre de la Ville on the riverfront facing the Île de la Cité. The Boulevard de Sébastopol in the foreground and the Paroisse Saint-Eustache church at Châtelet to the west are the most recognizable features on the cityscape today. 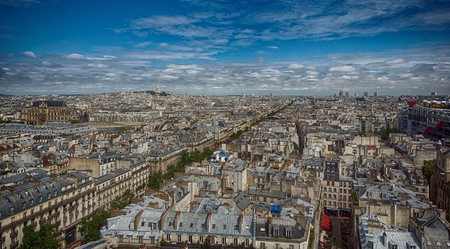 One of the Parisian ‘outsiders’, Malle’s third film, Zazie in the Metro, is the one which most closely aligns with the look and feel of the French New Wave. This adaptation of a novel by Raymond Queneau follows the titular character on a trip to visit her uncle in the capital. Devastated that she will not be able to ride the metro due to a strike, the youngster instead goes on a mad romp around the city, taking in some of its most famous monuments. Here she is on the cusp of bashing her uncle (rather undeservedly) on the head with a frying pan at the Pont de Bir-Hakeim, which, aside from the addition of a cycle path, looks as it did 56 years ago. 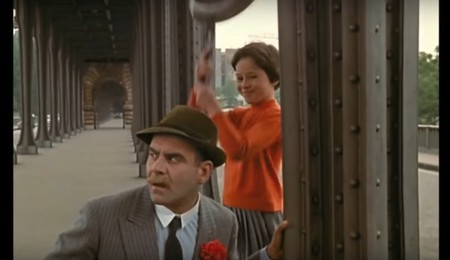 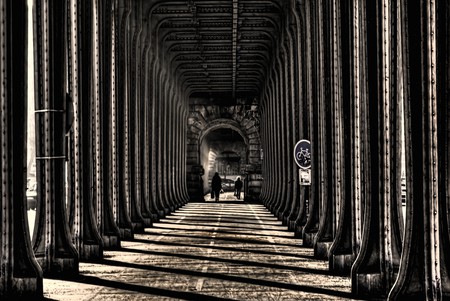 Easily the most famous cinematic ménage-à-trois in history, Jules and Jim follows the friendship of a shy Austrian and a French Bohemian and their flirtations with the former’s future wife Catherine, played by Jeanne Moreau. The film and its soundtrack are regular features on ‘Best of All Time’ lists and it is also Professor Stephen Hawking’s favorite movie – take it on the word of a genius that it is worth watching. Below, Ms. Moreau is taking a precarious stroll along the banks of the Seine at the Pont au Double, followed closely by her two admirers. You’ll never guess what she does next – and in that hat of all things! 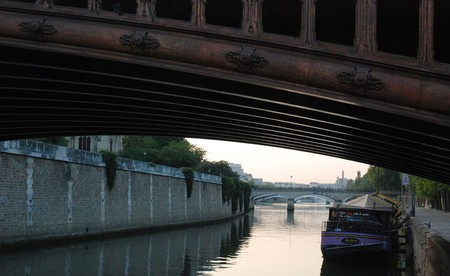 Cléo from 5 to 7 is the second film by Agnès Varda and a masterpiece of French feminist cinema. The story unfolds practically in real time as a young pop singer awaits the results of medical tests related to her suspected stomach cancer. Moving through the city – from a tarot card reader’s apartment, through shops, cafés, cabs rides, a show-stopping rehearsal, and the Parc Montsouris – she heads bravely into the unknown. The park’s stairs and strange, Disney-inspired railings haven’t changed a bit. 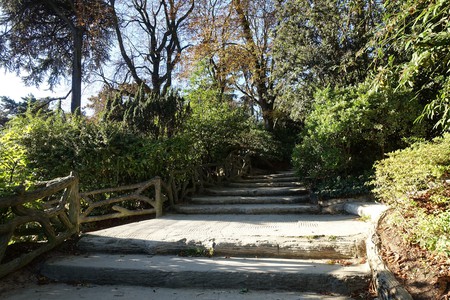 Godard’s fourth film, My Life To Live, tells the story of an aspiring actress turned ill-fated prostitute in 12 distinct acts. The lead character of Nana was played by the director’s then-wife, Anna Karina, who has quite a story herself. Arriving in Paris at 17, penniless, and speaking only her native Danish, she lived on the street before being discovered by a modelling agent and going on to work for Pierre Cardin and Coco Chanel. In the establishing shot below, the Arc de Triomphe is seen from the northwest on the Avenue de Wagram. 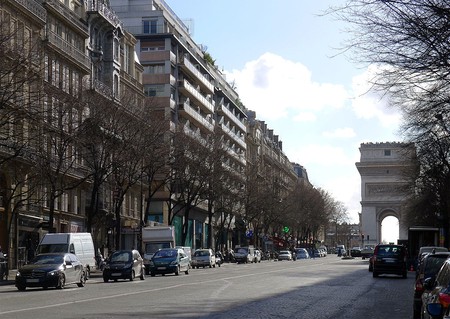 Like his namesake, Jacques Rozier also faced substantial difficulties getting his first picture made. Adieu Philippine took two years to arrive in the cinema, by which time it was lost within the buzz created around some of the bigger titles on this list. The director also took nearly a decade to make his next feature. The film is youthful and spontaneous and follows a TV technician on holiday in Corsica with his two Parisian girlfriends. In the scene below, Michel and one of his lovers enjoy a moonlit dance on the mountaintop above the Golfe de Porto – no doubt a hot-spot for romantic types even now. 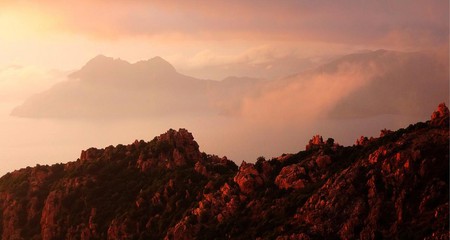 The Umbrellas of Cherbourg is the middle film of Demy’s romantic trilogy. A musical sung in its entirety, it follows the tragic love story of Guy and Geneviève, a role which made Catherine Deneuve a star. Set in the northern town of Cherbourg and during the Algerian War, the film is more middle-of-the-road than most associated with either the New Wave or the Left Bank groups, but its unforgettable score and songs have made it a classic of French cinema. Below, Deneuve watches as the train heads off in the direction of Paris on a platform whose ugliness has stood the test of time, much like her own beauty and talent. 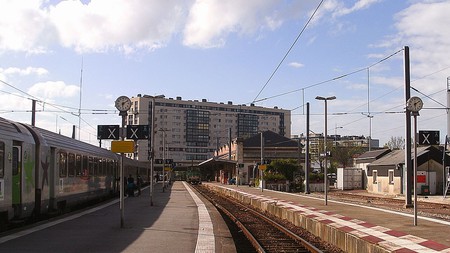