Raoul Dufy: The Fauvist Painter Who Turned into a Textile Artist 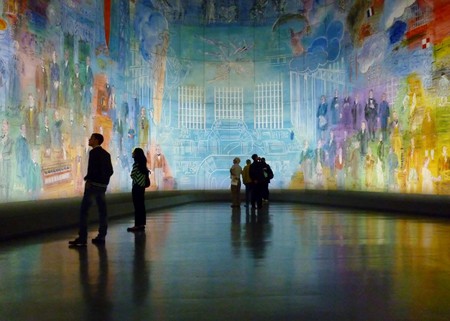 Raoul Dufy’s infamous delight in rich colour, linear shape and the equine form are elements for which this French artist is most readily associated and fondly remembered. However, his work in the media of wood and print textiles is often overlooked, or considered subsidiary. The Artist Textiles: Picasso to Warhol exhibition showing at the London Fashion and Textile Museum set out to change this creative pigeon-holing.

It is little over sixty years since Raoul Dufy died in Foralquier, but his artistic legacy has remained constant, nurturing the image of the French Fauvist painter that so often punctuates the walls of museums and galleries across the world. ‘Les Fauves’ literally translates to ‘the wild beasts’ in French, and Dufy is infamous for his scenes of spectacle, delight, extravagance, frequently populated with animals and bon-viveurs. Despite Dufy’s resonance with the energy and expressiveness of modern art, his lifetime’s work in the spheres of print and textile frequently, and undeservedly, gets overlooked. 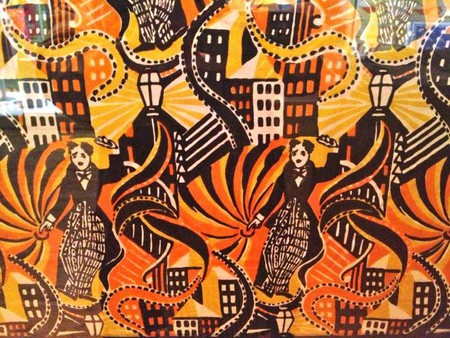 Detail from Charlot | All images courtesy of Anastasia Bow-Bertrand

At the turn of the twentieth century, Dufy was awarded a scholarship to study for four years at the Ecole des Beaux-Arts, Paris, during which time he was influenced by a range of homegrown talent from the impressionists and beyond to Paul Cezanne, to Georges Braque and Cubism. From this early departure on a conventional course in fine art, Dufy set up a small factory which designed and printed fabrics for the fashion house Poiret. Paul Poiret was a contemporary French dressmaker, whose company was disbanded in the economic aftermath of the First World War. 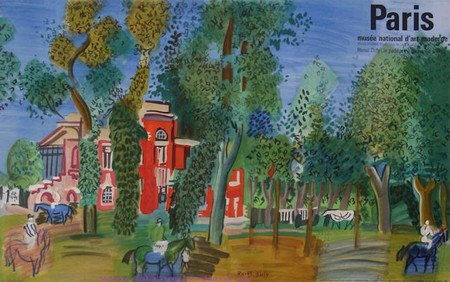 As founder of a textile company, Dufy was able to create and imprint his art in a medium quite unlike anything he had yet used. Some of the glorious products of his time devoted to working with print and material were showcased at the Fashion and Textile Museum, Bermondsey Street, in 2014. Titled Artist Textiles: Picasso to Warhol, the demographic of visitors at the show seems to be a mix of art and design students, Picasso aficionados and cloth fashion historians. However, in the final room, in an offshoot of the main exhibition, lies the focus of this article: a selection of Dufy’s textile pieces. 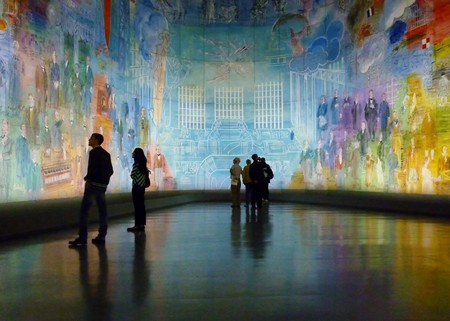 As the exhibition curators explain, Dufy was not alone in his move into this world of material design. The second and third decades of the 20th century saw many Fauvist artists, as well as members of the constructivist and futurist movements, become involved with creativity through textile form, which quickly became a near essential requirement and element of an artist’s work during the period. However, Dufy was the first 20th century artist to become seriously involved (artistically and financially) in this world, to great acclaim. 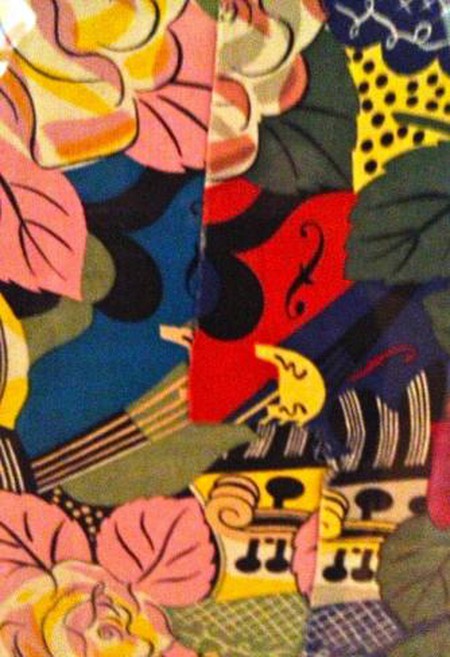 Print of Les Violins | All images courtesy of Anastasia Bow-Bertrand

The largest scale piece in the main exhibition exhibition is Les Maronniers, a roller-printed cotton fashion textile, sourced in New York, 1955. The wide weave features a contemporary lilac backdrop on which terraced buildings and flecked trees are printed in horizontal lines. The outlines and blocks of vibrant mint green, salmon pink and emerald colours are reminiscent of the paintings for which Dufy is so recognisable. Set apart from the thoroughfare of the central displays, the smaller collection of his work features Le Champ de Course (also known as Bagatelle), dating from 1923. A woven silk fashion textile, this piece recalls the wood cuts that dominate Dufy’s creativity during the early 1900s. In positive and negative relief, the image of the natural world represented by deer-like horses, and coiling fern leaves, frames imprints of glass fronted buildings at which punters are seated, suggestive of the flipside to the entertainment of horse racing: the constraints on the wild.

Alongside this sits a similarly sized rectangular fabric – Charlot. With an equivalent black base, blocks of white, yellow and orange are layered to create the sense of a circus at night. Remarkably, the colours have remained punchy and fresh, despite the wear of ages. Most reflective of the influence of the cubist ideals on Dufy is the bath towel-sized Les Violons. Intriguingly, this piece carries the marks of its history and origins with a shop presentation spine still attached to this block-printed furnishing textile from 1919. This eye-catching piece features the recurrent shapes of large roses, scattered amongst fragments of violin scrolls, tuning pegs and musical scores. The dominant hues of rich ruby, candy floss pink, navy, ochre and cobalt blue are almost perfect complimentary colours, but importantly, they are not quite matching. Much of Dufy’s work oscillates between expectations of normal representation and an ‘otherness’ which is, perhaps, a reason for the criticism often levelled at his paintings for erring towards the superficial. If this collection is the touchstone from which to consider this remark, the magical, metaphorical materiality is, in fact, precisely what brings life to these prints. 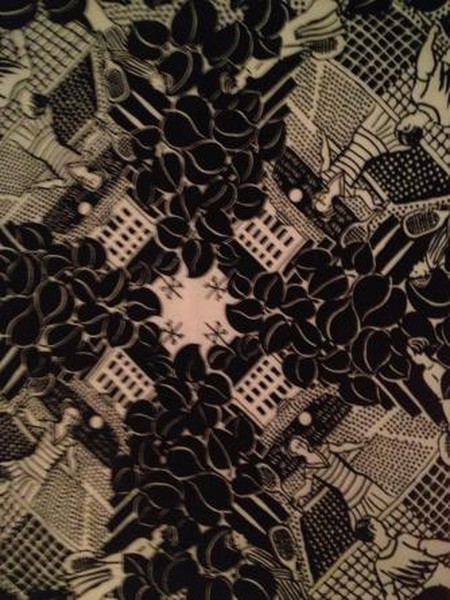 Most personally impressive is the final work in the exhibition, Dufy’s Le Tennis, a block-printed silk headscarf dating from 1920s Lyon. A teal border frames the mirror-printed image of two monochrome tennis players in action at each corner of the square. The subject matter of this piece accords with the regattas on the French Riviera, lavish concerts and exhibitions which were both the inspiration for, and scenes of many of his paintings and prints characterised by the virtuosity of his linear work and tonal brilliance.

Dufy’s paintings might occupy the bulk of his oeuvre and, arguably, his critical success, but his textile work offers a wonderful blueprint of his paintings, in an individual, practical and tangible form.