Paris' Canals Are Now Clean Enough to Swim in 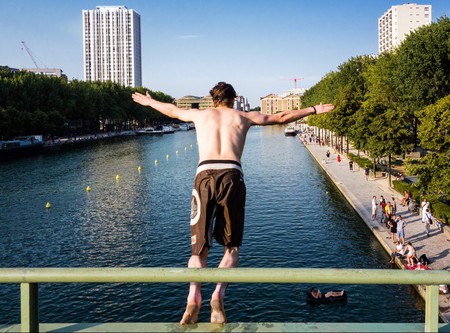 On Monday afternoon, hundreds of Parisians queued in the scorching heat to be the first to plunge into the three new open-air swimming enclosures that have been installed in the Bassin de la Villette, the broad strip of water that connects the Canal de l’Ourcq and the Canal Saint-Martin in the northeast of the city.

The temporary structures, built at an estimated cost of €1.2 million ($1.4 million), stretch 100 meters along the Quai de la Loire, the Bassin’s southern point, and measure 16 meters across. The first is a paddling pool for young children, with a depth of just 40 centimeters (15 inches), the second is still reasonably shallow at 1.2 meters (4 feet), and the last, which is intended for adults only, is 2.2 meters (7 feet) below the water’s surface.

They are all fed directly with water from the canals. ‘It’s a natural swimming experience, without chemical or biological treatment,’ a statement from Anne Hidalgo’s town hall promises. The only thing separating the swimming spaces from the rest of Paris’ canal network is a filter mesh intended to keep out leaves, fish, and other objects. According to early reviews, the water is as good as they say it is, though a small residuum of green algae does mean you’ll want to have a quick shower after your dip. 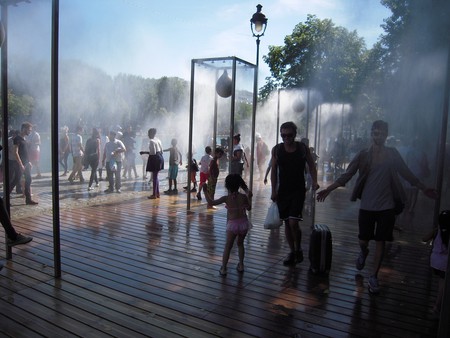 Up to 300 people can use the free, lifeguard-protected pools at any one time, though there is only locker space for 80, and, seeing as capacity had been fully reached just 30 minutes after Monday’s 3PM opening, it looks like they’ll have no problem in meeting their daily target of 1000 swimmers. This part of Paris is always popular during the summer anyway, thanks to the Paris Plages initiative, that brings popup restaurants and bars, sporting activities, lounge chairs and sun beds, and even palm trees to the canal’s walkways. The entire beach area will be open daily from 7AM to 11PM. 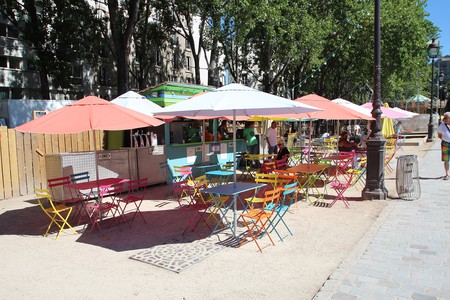 Getting the canals clean enough to swim in has been a mission of Paris’ town hall for many years. These waterways were once filthy, a victim of the chemical run-off and cargo barges of the neighborhood’s industrial past. Since the 1980s, tightened regulations have substantially reduced the amount of industrial waste entering the network and investments in wastewater treatment and sewer renovations have also greatly improved the water quality. 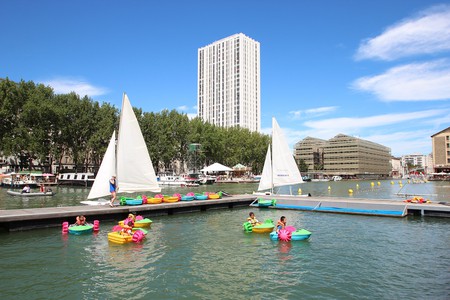 Following an intensive clean-up operation two years ago, the bacteria levels dropped below safe levels for the first time in decades. This was the green light many overheated Parisians were waiting for and it wasn’t uncommon to see people leaping off the canal’s highest bridges even though entering the water was still very much illegal. This was particularly popular last summer, after locals were encouraged by the sight of the Canal Saint-Martin being drained, dredged, and generally spruced up in January 2016. 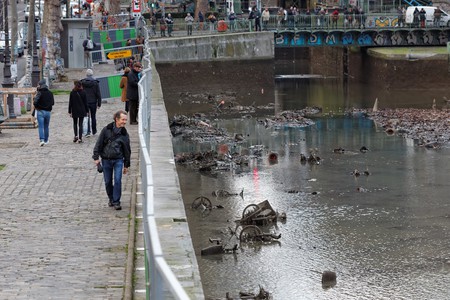 The plan is to dismantle the structures at the end of the Paris Plages season, on September 10, and reinstall them next summer if this pilot year is deemed to have been a success. Plans are also afoot to make the Lac Daumesnil in the Bois de Vincennes swimmable by 2019 and, by the time the Olympics come to the French capital in 2024 (or 2028 if the Angelenos have their way), Parisians will also be able to take a dip in the Seine.