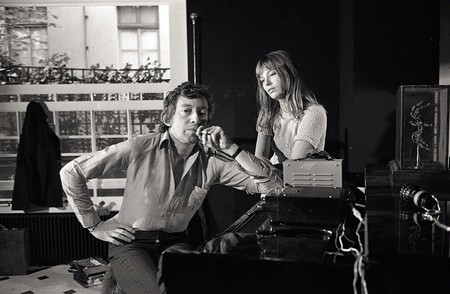 France is widely regarded as a cultural hotbed and nothing reveals this more than the growth of the particularly French musical tradition of the chanson. From the stunning self-reflexive ballads of Edith Piaf, to the scandalous and bizarre works of Serge Gainsbourg and the beautiful odes to Paris of Yves Montand, France has produced some of the finest lyric-driven music to date. In this recollection of the masters of French chanson, we look at the best examples of the form, providing a musical odyssey through the bars and cafés of Paris.

Widely regarded as the most popular French chanteuse, cultural icon and international star, Édith Piaf remains the greatest star of French Chanson. Born to a Norman street acrobat and a café singer, she was discovered in 1935 in the Pigalle Area of Paris by nightclub owner Louis Leplée. Specializing in ballads of a self-reflexive nature, “La Vie en Rose” (meaning life in rose-colored glasses; literally “life in pink”), written by Louis Guglielmi with lyrics by Piaf, is considered to be Piaf’s tour de force. With lyrics detailing the troubles of war time and the loss of love, La Vie en Rose became a favorite with not only French audiences, but listeners worldwide. The song was inducted into the Grammy Hall Of Fame in 1998, and has featured in films such as French Kiss, Natural Born Killers, and the 2007 Oscar-winning Édith Piaf biopic of the same name, La Vie en Rose.

Rina Ketty moved to Paris in the 1930s and made her breakthrough in 1938 with the songs “Sombreros et Mantilles” and “J’attendrai.” Ketty escaped the limelight in 1945 as a result of the war, and eventually moved to Canada in 1954. In 1965, Ketty embarked on the resurrection of her career in France, but was unable to reach her pre-war success. However, in 1991 French minister of culture Jack Lang awarded her the medal Ordre des Arts et des Lettres, which aims to decorate achievements in the Arts and Cultural sphere. J’attendrai, which means “I will wait for you,” was originally written in Italian by Dino Olivieri and Nino Rastelli, translating to “Tornerai.” The melody of the tune derives from the “Humming Chorus” from Puccini’s opera Madama Butterfly. The lyrics delineate the anxious wait for the return of a lover who has departed to a remote destination in far-off shores, something which had particular resonance during WWII.

Charles Trenet, born in 1913, was a French singer, composer, and lyricist most famous for recordings during the late-1930s through to the mid-1950s. An exception to the rule at the time, Trenet solely released songs he had composed and recorded. Rumour has it “La Mer” is the consequence of a long train journey, in which he wrote the song on the back of toilet paper in merely 10 minutes. Regardless of the truth of this anecdote, it is felicitous to the songs harmonious, whimsical, and timeless feel. The track has been recorded 400 times in a multitude of languages and has been an influence for re-workings such as “Beyond the Sea” by Bobby Darin.

Translated as “I Love You….Me Neither,” the track is one of the most controversial duets ever released. Lyrically, the song details the conversation between two lovers during intimacy. Banned in many countries for its explicit nature, the song did attract universal acclaim and eventually reached number one in the UK charts. Originally written by Gainsbourg at the request of girlfriend Brigitte Bardot, when her businessman husband heard it he asked for the single to be withdrawn. In 1968, Gainsbourg began dating English actress Jane Birkin and they recorded the song together. The song was declared by Gainsbourg to portray the impossibilities and desperation of physical love, and features provocative lyrics such as “Je vais et je viens, entre tes reins” (“I go and I come, between your loins”). The French press reported the song as an “audio verite,” and the eroticism was considered offensive which resulted in its expulsion from radio across much of Europe. However, the song is one of the greatest success stories of French chanson, and by 1986 it had sold four million copies. Music critic Sylvie Simmons stated that the lyrical subtleties and French nuances were lost on the late-1960s Brits, confirming the notion that “life across the Channel was one of unchecked lubriciousness.”

Françoise Hardy, born in 1944, is a French singer, actress, and astrologer who has become an iconic figure in fashion and music. “Tous Les Garçons et Les Filles” (“All the boys and girls”) was chic superstar Hardy’s first hit, eventually achieving multi-platinum status in France. Hardy, who wrote the song, narrates a story about the envies of watching others around you fall in love. Hardy went on to record the song in English, Italian, and German; it has been covered by The Dresden Dolls and the Eurythmics; and has featured in films such as Moonrise Kingdom and The Dreamers.

Born in Paris in 1891, Fréhel suffered a traumatic upbringing which resulted in her being left to live on the streets as a child. She began her career with the stage name Pervenche, performing in Paris music halls and cafés. At 19, she attempted suicide as alcohol and drugs began to dominate her life and later found refuge from her mental torture in Turkey and then Russia. Ten years later in 1923, with the new stage name of Fréhel, she returned to Paris to resurrect her music career and was received well by an astonished public. She went on to perform at the Paris Olympia in 1924 and toured popular music halls all around the country. Part of the Bal musette group, she usually sang with accompaniment from pipes or accordion. The song “La Java Bleue” utilizes the seductive and controversial java dance, an alternative to the waltz with partners dancing in extremely close proximity and with heightened eroticism.

Lucienne Boyer, born in 1903, was a French singer whose soft and harmonious voice allowed her from an early age to sing in the cabarets of Montparnasse. Soon after taking up an office job at the local Parisian theatre, she was given her own show as a singer in Parisian music halls up and down the country. She has a multitude of recordings with Columbia Records, written during her time in New York, including her most notorious song, “Parlez-Moi d’Amour.”
Written by Jean Lenoir, this ethereal song features cherubic instrumentation akin to the French music-box, and angelic vocal melodies. “Parlez-Moi d’Amour,” or “Speak to me of Love,” depicts the little romantic statements lovers whisper into each other’s ears. This song was the first-ever winner of the Grand Prix du Disque presented by the Charles Cros Academy. “Parlez-Moi d’Amour” recently featured in the Woody Allen film Midnight in Paris, as well as the classic Casablanca.

Joe Dassin is an American-born singer-songwriter most famous for his work in the French language. Dassin and his family traveled around Europe after being blacklisted by Hollywood in 1950. In 1964, after moving to France, Dassin signed a major recording contract with the American label CBS, becoming the first singer to perform French songs under an American label. In the 1970s, Dassin was a massive success, his songs regularly featuring in the French charts, and “Les Champs-Élysées” was his most famous record.

Written by Claude François and Jacques Revaux in 1967, the song was originally recorded by Hervé Vilard. However, Revaux was disappointed with the recording and asked François to re-record it in 1968. François was excited about the recording but adamant they should include the theme of a couple suffering from an oppressive relationship, as a consequence of his hostile breakup with French singer France Gall. The song has been of great inspiration to many writers, most notably Paul Anka, who attained the rights to the song after hearing it in Paris. After translating the lyrics into English, he gave the song to Frank Sinatra, and in 1969 “My Way” was released.
Additionally, David Bowie used “Comme d’habitude” as the platform for his 1968 song “Even a Fool Learns to Love,” which was never recorded or released. However, after rejecting the opportunity to write English lyrics for “Comme d’habitude,” he would return to the idea and use the song as inspiration for the classic 1971 track “Life On Mars?”