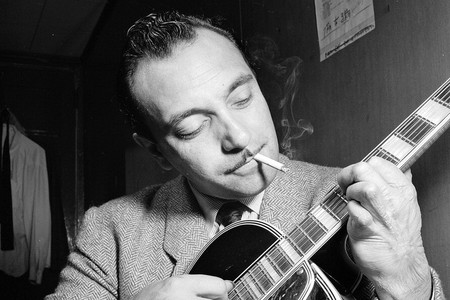 If the good die young, then the great survive tragedy first. Such was the lot of maverick gypsy jazz musician Django Reinhardt. From a childhood spent on the road, he emerged as one of the most influential guitar soloists not only of his generation but that the continent has ever produced. Naturally gifted, innovative in the face of adversity, and an ingenious blender of musical traditions, he is an artist whose work is as exhilarating today as it ever was.

Reinhardt was born on January 23, 1910, in Liberchies, Belgium. His family traveled around northwestern Europe for the best part of the decade, only settling on the outskirts of Paris at the conclusion of World War I. While receiving no formal schooling – he was practically illiterate even as an adult – Reinhardt was musically gifted from a young age, teaching himself first to play a banjo-guitar hybrid instrument. He earned money as a child busker and, by his early teens, had graduated to gigs in the city’s clubs. Initially playing popular French tunes, he became interested in American jazz in the mid-1920s, particularly the works of Duke Ellington, Louis Armstrong, and Joe Venuti.

On the night of November 2, 1928, Reinhardt was in his caravan home with his wife when paper flowers she had been making caught on fire, quickly engulfing the small space in flames. The couple escaped the blaze but Reinhardt sustained serious wounds to his right leg – to the extent that his doctors considered amputating it – and his left hand, permanently losing the use of his fourth and fifth fingers. His recuperation took more than 18 months, during which he painstakingly devised a playing technique that enabled him to overcome his new disability. His two good fingers and thumb worked rapidly up and down the guitar neck and he used his two paralyzed digits on chords, double-stops, and triple-stops. This novel system is in part responsible for the originality of Reinhardt’s sound.

In 1930, Reinhardt was back in the Paris nightclubs and, by the middle of the decade, he had formed the Quintette du Hot Club de France with violinist Stéphane Grappelli. The band started covering American songs like ‘Dinah’ and ‘Lady Be Good,’ which helped grow a transatlantic following, but they also recorded original music. Some of their biggest hits include ‘Djangology,’ ‘Bricktop,’ and ‘Swing 39’ and Reinhardt’s style at this time was called ‘gypsy swing’ and ‘le jazz hot’. As Reinhardt couldn’t read or write music, Grappelli transcribed his compositions for the Quintette and his solo work. The group, which Reinhardt’s brother, Joseph, subsequently joined, became Europe’s first major jazz band.

The Quintette were on tour in England when World War II began. The others remained in London, but Reinhardt returned to France. After the country succumbed to the Nazis in 1940, Reinhardt continued to play the Paris nightclub scene, often to the pleasure of the occupying forces. All the while, hundreds of thousands of his fellow Romani people were being sent to their deaths in concentration camps along with millions of others. His sadness from this time is evident in Nuages, a reflection on the occupation and one of his most famous compositions.

After the war, Reinhardt experimented with the electric guitar and other styles of jazz and even toured the United States with the idol of his youth, Duke Ellington, in 1946 albeit with limited success. A new configuration of the Quintette continued to record but gave few performances. On May 16, 1953, Reinhardt was returning home to Fontainebleau from one such show in Paris when he suffered a stroke and died.

The legacy of his unconventional technique and unique blend of American, European, and Romani musical traditions can be heard today in genres as diverse as blues, rock, and country.