Sculptor Caroline Mesquita On Being an Artist in Paris: ‘You Have To Fight’ 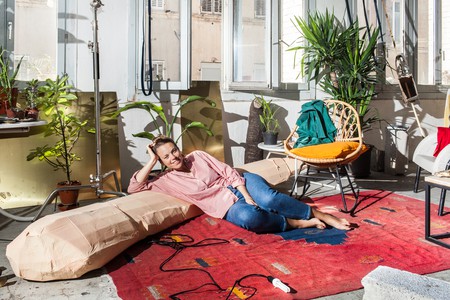 It is very easy to be overwhelmed by Paris and in the process lose sight of the city you expect to find. But what most visitors don’t know is that the real Paris – the Paris that has inspired artists and writers for centuries – doesn’t just present itself to you; it must be sought out. Thankfully, sculptor Caroline Mesquita can help you cut through the chaos and lead you around the neighbourhoods that shape her stark, dramatic works. 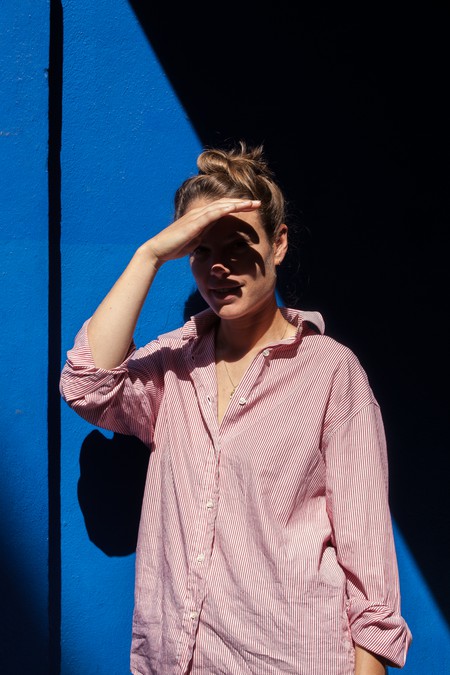 A trip to Paris can come as a shock to the system. The French capital is touted as a city of picture-perfect narrow streets, thick with the buttery waft of freshly baked pastries from the many boulangeries, but the reality is altogether less idyllic. Paris can be noisy and congested, and finding a quiet spot amid the chaos proves to be a rare luxury.

Caroline Mesquita arrived in the city as a student at the Beaux-Arts de Paris almost 10 years ago, following the completion of her studies in Rennes. “In Paris it was totally different. It was like you had arrived in the jungle, but it was closest to what it’s like to work as an artist in real life. I did some internships, went to gallery openings, and it was helpful to understand what it really means to be an artist. It’s not just poetic thinking. It’s a proper job,” she reflects. “It was good to grow up in a cocoon and then come to the big city.” 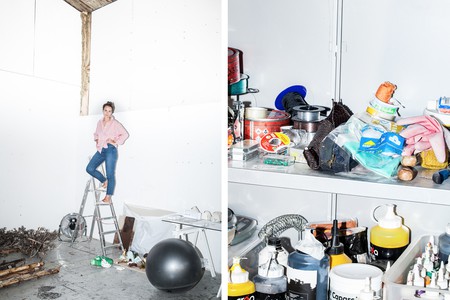 Mesquita works primarily with metal, bending strips of brass and copper to create the shapes and figures that populate her large-scale scenes. These metal sheets are then altered, oxidised or painted, introducing patterns and features in unusual, naturally occurring colours and tones. “In the street you see sculptures that get all green, but with the chemicals that I use you can get all different colours. Sometimes it smokes and smells really bad,” she says, laughing. “With the metal, I like that you can transform it. You can decide to cut metal elements and then go to the foundry to give them new life and new identities.

“It’s always a big investment to be a sculptor. The production can be expensive. You need a big studio, storage and shipping,” she says, speaking of the practical side of her work. Following her graduation from art school, Mesquita took a studio for a year in Gennevilliers as part of a residency at La Galerie Édouard-Manet in Northern Paris, which – despite its name – is dedicated to the promotion of contemporary art. In recent years, it has become a hotbed for emerging artistic talent. 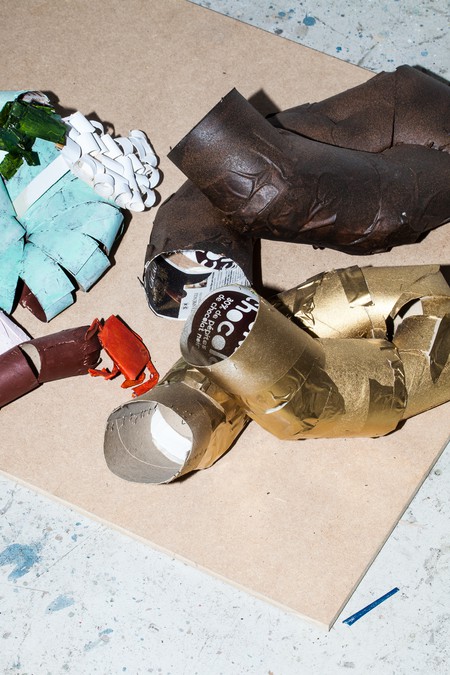 While establishing herself as an artist in the city, Mesquita lived for many years in the 13th arrondissement, a neighbourhood that is home to a large Chinese and Vietnamese population. Small groceries rub shoulders with ‘traiteurs’, or delicatessens. High-rise apartment buildings dominate the skyline in the area; she remarks that writer-provocateur Michel Houellebecq resides in a tower block at hyper-modern development Les Olympiades. “It used to be a place where no one would live, but now people are starting to move there,” she observes. “It’s close to the Seine, so you can just walk near the river, and it’s not far from the Natural History Museum. It’s very different from the north of Paris.” 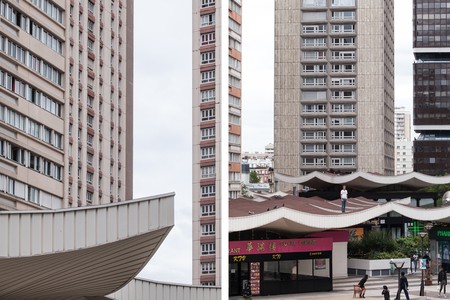 The nearby Bibliothèque François Mitterrand is similarly outsize, and is a favourite of Mesquita’s. With four towers and a sunken garden inside the library, it looks as if it has been beamed in from a distant planet. “I was going there a lot during my time in Paris. It’s a windy place, with fresh air when it’s very hot,” she says. “Across the bridge, near Bercy, you have some big parks that I really like.” The picturesque Parc de Bercy is home to the Cinémathèque Française, which is housed in a striking postmodern building designed by Frank Gehry in 1994. Another favourite in the area is the Église du Saint-Esprit, an Art Deco church built in 1935 that has an unusual large reinforced concrete dome. It was designated a historical monument in 1992. “My friend Hampus Lindwall plays the organ there,” she adds. 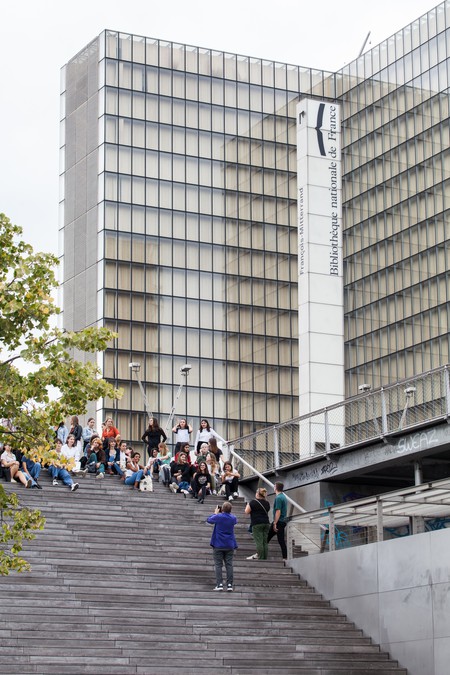 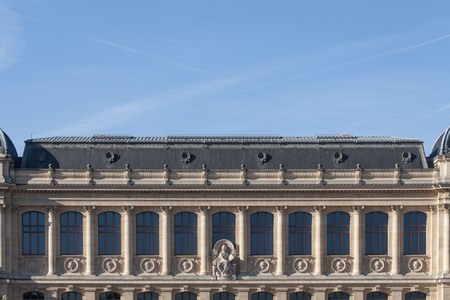 Paris is a city known for its gastronomy, but the wealth of choice can be overwhelming. French fare might steal the limelight, but some of the city’s best food is found in its diaspora communities. Mesquita’s choice for eating out is Sanukiya, a low-key Japanese restaurant that specialises in udon and light broths. Her choice of bakery? Du Pain et des Idées in the 10th arrondissement, where croissants, still warm from the oven, sit beside resplendent puff-pastry cases filled with apples, fresh figs or pistachio.

Mesquita is also a fan of the bars and restaurants in Butte-aux-Cailles, tucked away in the 13th arrondissement. In contrast to the stark modernity that characterises much of the area, the diverse cobbled streets and Art Deco buildings of this district set it apart and make for a memorable destination – a far cry from the Haussmannian boulevards that have come to dominate the views of Paris for so many. 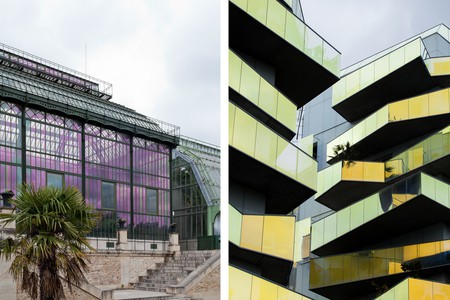 A place recommended by Mesquita for quieter reflection, away from the bustle of the city and its ever-growing number of newer art galleries, is the time-worn Musée Gustave Moreau. Situated on the rue de la Rochefoucauld in the 9th arrondissement, the museum occupies Moreau’s original home and studio, and features a spectacular wooden and cast-iron spiral staircase. It is an intimate setting, in which Moreau’s many drawings, paintings and sculptures can be fully appreciated.

Paris, for Mesquita, represents the place she learned her craft and found her way in the world as an artist. It’s a place of growth and learning for Mesquita, and it’s the noisy, chaotic sides of the city that have helped to shape her into the artist she is today. “I was happy to stay in Paris because it’s quite a difficult city, and you have to fight to get things, to construct yourself. You can’t just dream. You really have to work hard,” she concludes. “It pushes you to develop your personality, your singularity.” 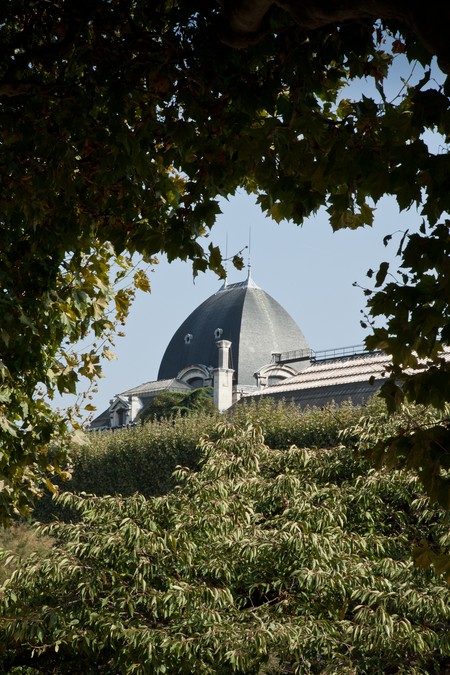