These Streets in Dijon Are Rich in History 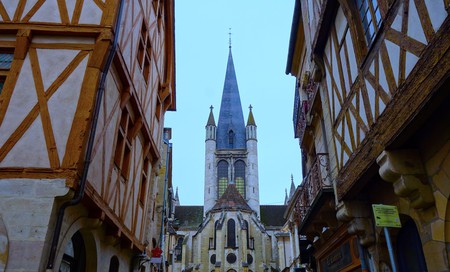 There are more historic landmarks in Dijon than you can shake a selfie stick at, with hundreds of listed buildings, monuments and sacred sites dating back to Roman times. The most fun way to enjoy Dijon’s streets is to get lost in their maze, but you need to start somewhere, so here are the streets that give you that feeling of travelling back in time.

This road is short but packed with medieval historical interest. The street gets its name from the little owl stone carving just above eye level in one of the pillars of the church of Notre Dame. The owl is said to bring good luck if you rub it with your left hand, and you will see even inveterate locals deviate just so slightly when they pass by, to discreetly brush their hand on the benevolent bird. The church was first built in the 13th century, starting with a more humble chapel, and around 1220, the rather more ambitious Gothic church that we see today started to take shape. There are some gargoyles on the side of the church, and an amazing array of 51 grotesques (similar to a gargoyle but just decorative, not designed as a rain spout, therefore they don’t ‘gargle’). These were recreated in the 19th century to replace the originals that had been removed, presumably to avoid accidents from the stone carvings falling on unwitting pedestrians. Across from the owl is the Maison Millière, a great place to take a break and enjoy lunch or a coffee. The shop was built in 1483 for the drapes merchant Guillaume Millière, and is amazingly well preserved. Next door is the Vogüé mansion, built around 1614, one of the most ornate and elegant in Dijon.

This picture-perfect spot is an emblematic medieval trade street. It used to be called Pig Market Street, then Serge Street after the cloth. After a few glassmakers set up shop here, the name of the street was changed to indicate their trade. Half-timbered homes succeed each other, one more striking than the next. By the carvings and symbols on the façade, passers by can guess at the trade of the original owners. It is a truly immersive history lesson. 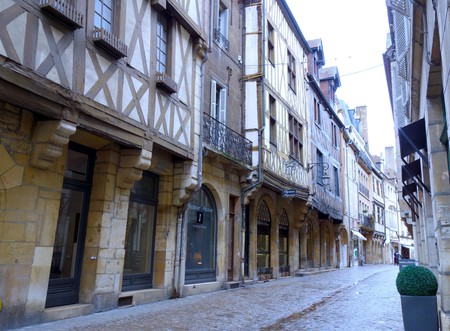 One of the most picturesque streets in the centre of Dijon, present-day Rue des Forges is lined with chic boutiques and inviting cafés, patisseries and chocolate shops. If you lift up your eyes from the tempting goodies on display, however, there is a further source of wonder as the street is lined with amazing architecture. Don’t miss the Maison Maillard at number 38, one of the 18th-century stately homes in Dijon which has the most spectacularly elaborate façade, as well as the Hôtel Aubriot, next door at number 40. The latter dates back to the 13th century — researchers think that its vaulted cellars may have been built even earlier. 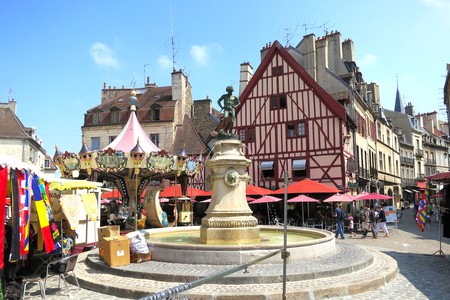 Saving the best for last, the Rue de la Liberté is the main pedestrian artery in Dijon. Called Rue Condé before the revolution, this is the street where the Ducal Palace is located, now the Musée des Beaux Arts, which used to be the headquarters for the court of the Dukes of Burgundy at the time when Dijon was one of the most powerful centres in Europe. On the opposite end of the street looking towards the Darcy Gardens and the train station is the Porte Guillaume, an arch erected in the 18th century. It marks the spot where one of the main gates to Dijon was located in the Middle Ages. On the arch today there is a plaque dedicated to Thomas Jefferson as a symbol of Franco-American friendship. All along the Rue de la Liberté there are cafés, restaurants and shops, including the ‘modern’ Galeries Lafayette, and medieval homes that were often built and occupied by a merchant or tradesmen, like the mustard shop Boutique Maille at number 32, the remarkable Hôtel Burteur at number 68, and the ‘house of three faces’ on number 54 and 56. Today you will find a rather mundane pharmacy on the ground floor, but this building is a rare surviving example of a medieval townhome. It was divided into three parts with a gabled roof for each section, built between 1450 and 1470, and originally inhabited by Carthusian monks — a pretty special place to pick up a prescription. 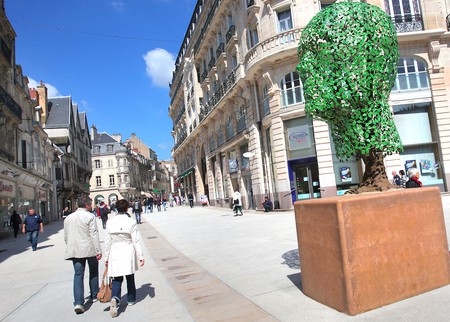