EUROPE
/
FRANCE
/
NIMES
/
Things to Do

The Top 10 Things To Do And See In Nîmes

Plunge yourself into the Roman era as you explore the magnificent monuments scattered throughout the beautiful city of Nîmes – some date back as far as the first century BC. And while these striking structures may be emblematic of Nîmes, there are many other sights and experiences that testify to the centuries witnessed by this long-lived town. From ancient ruins to contemporary art, here’s a look at what’s simply not to be missed. 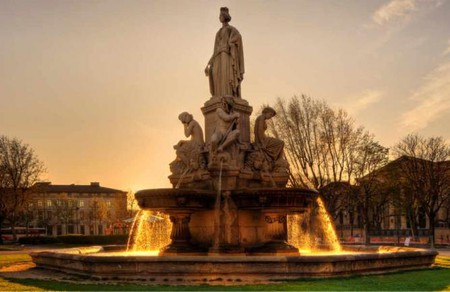 As you leave Nîmes station, walk straight along the pleasant tree-lined Avenue Feuchères to find yourself in the lovely main square of Esplanade Charles-de-Gaulle. Dating back to the 16th century, when it was originally a space for artillery practice, it wasn’t until the 18th century that it really became a focal point for social life in the city. At the centre of this enchanting spot is the strikingly detailed Fontaine Pradier. Built in 1851, its central figure is supposed to be a symbol of the city of Nîmes, while the four statues surrounding here are said to represent the four main rivers of the region. 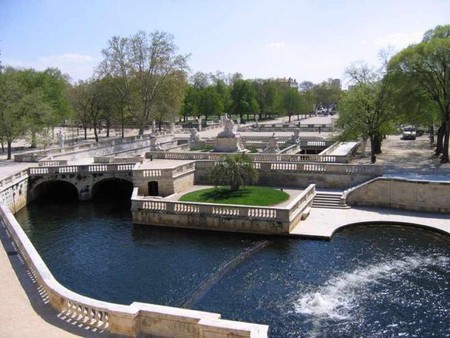 These idyllic gardens are historical on many levels. Built in the 18th century, Les Jardins de la Fontaine are notable for their gorgeous neoclassical-style water features, statues and Roman artifacts. Climb up the lovely winding paths to reach the imposing Tour Magne, the only vestige of ancient Augustan fortifications left here. Used throughout history as an important military defence point, it offers an unparalleled panoramic view of Nîmes and its surroundings. Near the foot of the gardens is situated the Temple of Diana, which is also well worth exploring. Despite its name, it is unlikely that it actually was a temple and indeed, no one currently knows exactly why it is linked to Diana – the goddess of the hunt. What can be guessed, however, is that it probably once contained a library and that its preservation is down to its role as a monastery during the Middle Ages. 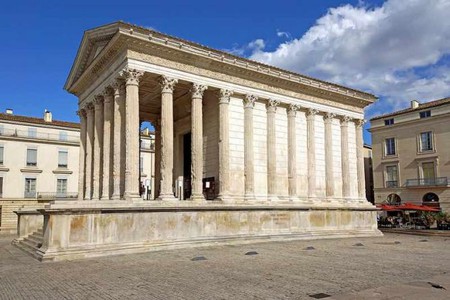 Located in the historic old town, La Maison Carrée (literally ‘the square house’) is one of the best-preserved Roman temples in the world. Built around 16 BC, it is a beautiful example of Vitruvian architecture. Over the course of time, it has been used as a mediaeval town hall, a church and a museum of ancient art. It now houses an interesting film on the history of the Roman settlement of Nîmes and the role the temple played throughout. 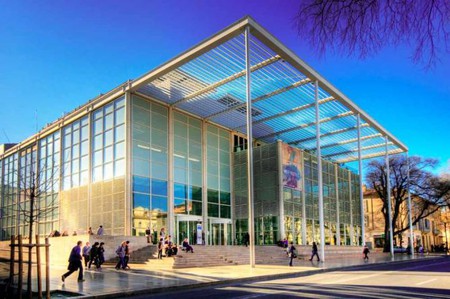 Creating a brilliant juxtaposition between the old and the new, being in the same square as the ancient Maison Carrée, the Carré d’Art is a striking piece of modern architecture, housing a large collection of contemporary art as well as the city’s library. Built in 1993, it is nine stories high, half of which are interestingly below ground so as not to overshadow the iconic Roman temple. It hosts a number of temporary exhibitions, showcasing some of the latest ventures in modern art. 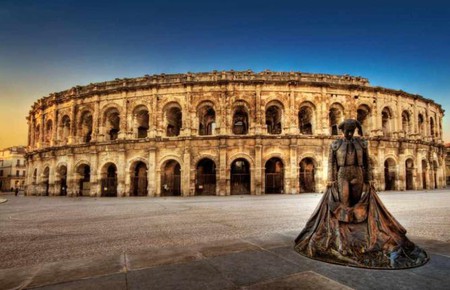 Torero statue in front of The Arena | © Wolfgang Staudt/Flickr

Perhaps the most iconic monument of Nîmes, the Arena is one of the best-preserved Roman amphitheatres in Europe. It has an extremely rich history and its uses have varied greatly from the Roman era to the present day. It originally hosted typical Roman gladiator fights from its construction around 70 AD, was used as a fortification settlement in the Middle Ages and was finally converted into a bullring in 1863. Today, evidence of each of these functions can be found in the intriguing exhibitions within the arena’s walls. The site is still in use too, and not least of all for some big name musical performances that have included the likes of Dire Straits, Depeche Mode, Rammstein, and Metallica (be sure to check out that annual music festival during the summer). 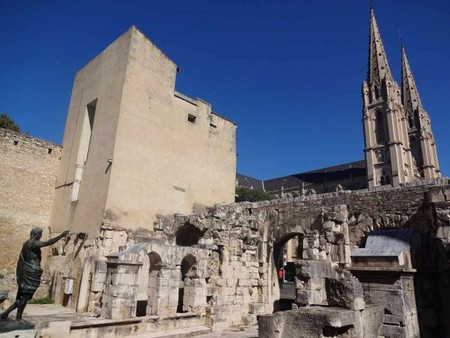 On the edge of the charming old town lies the striking Place Gabriel Péri. It is dominated by the stunning 19th-century, neo-gothic Eglise Saint Baudile, the largest church in Nîmes, capable of holding up to 3,000 people. To the left of this splendid structure visitors will find the fascinating Porte d’Auguste, the remnants of one of the main gates of the ancient Roman wall, a vestige of when Nîmes was a protected, imperial city. Two semi-circular towers once flanked this impressive monument; their former places now marked on the ground in writing. 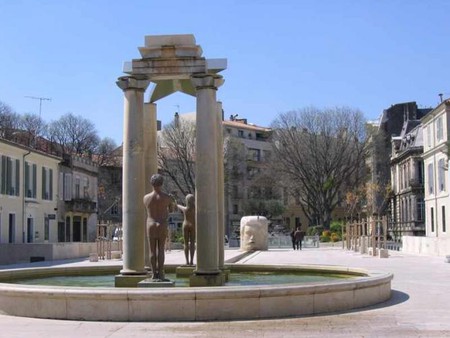 For a classy way to spend an evening in Nîmes try the stylish Place d’Assas. Notable for its interesting water feature, this tranquil spot is surrounded by chic bars and restaurants with comfortable outdoor terraces. Try the lovely Imprévu for good portions of gourmet food, or the wine bar Casti for an impressive selection of delectable wines, complemented by delicious dishes of fresh, inventive French fare. In short, a great and comfortable way to relax after a long day of exploring Roman monuments. 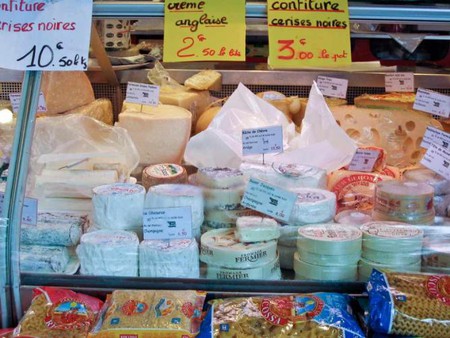 Built more than 120 years ago, Les Halles de Nîmes is a permanent covered market that sells fresh, authentic local produce. From cheese-sellers to butchers to bakers, this is the perfect place to sample the lovely fresh ingredients that make French cuisine so special. There are also several bars and restaurants within Les Halles itself, all offering a lively ambiance to experience with oodles of wine and regional favorites. 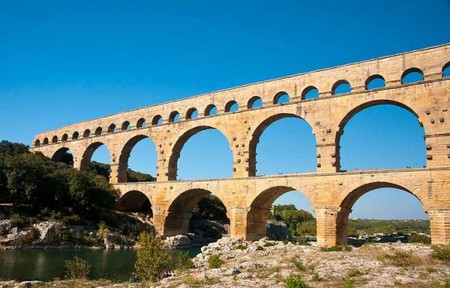 Built in the first century AD, the Pont du Gard is yet another of the Roman monuments that make Nîmes so iconic. This is the highest standing Roman aqueduct in the world, and certainly one of the best preserved. It has survived so well because it was used after the Roman Empire’s collapse as a toll bridge, connecting the two banks of the River Gardon. By visiting it, become a part not just of the Roman world, but of a much larger period of history, as you join the ranks of the millions who’ve been inspired by its arches over the years, from Jean-Jacques Rousseau to Henry James. 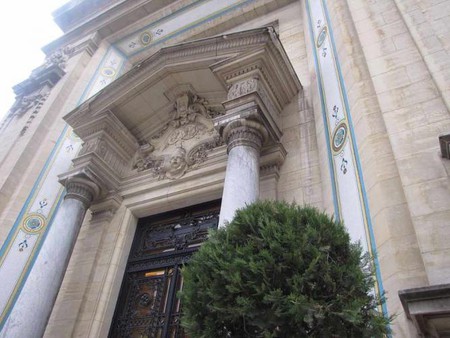 A beautiful building, almost a work of art in its own right, the Musée des Beaux-Arts of Nîmes houses a fantastic collection of fine art and sculpture spanning some millennia. Perhaps its most notable piece is the impressive mosaic, dating from the second century AD and the largest to be found in the whole city of Nîmes. It is impossible to miss, being the centrepiece of the largest room of the museum, and the fact that it is so well complemented by the 19th-century neo-classical sculptures that lurk all around it.