An Introduction To 'Orientalist' Art In 10 Famous Works 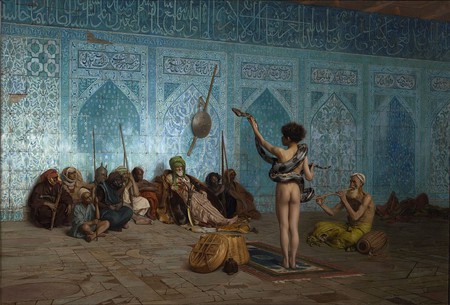 For 19th century Europeans, the ‘Orient’ represented all of the lands east and, occasionally, south of their home continent. After Napoleon’s invasion of Egypt in 1798, and the European colonialism that ensued a few decades later, French painters began to take an interest in these ‘exotic’ countries. Many of these paintings use a vibrant color palette and are imbued with eroticism, while others are a more subdued type of propaganda.

While some would say this work was an Orientalist piece, others are more inclined to say Gros was a precursor to the style. Either way, there are undertones of Orientalist characteristics, including the architectural elements, dress and figures. A type of propaganda, Napoleon in the Plague House at Jaffa was commissioned by Napoleon himself, who wanted Gros to depict a scene when Napoleon went to Jaffa to visit French soldiers who were sick with the plague, putting to rest the rumors that he wanted to execute the soldiers. It even shows him touching one man’s sore. This masterpiece can be seen at the Louvre in Paris. 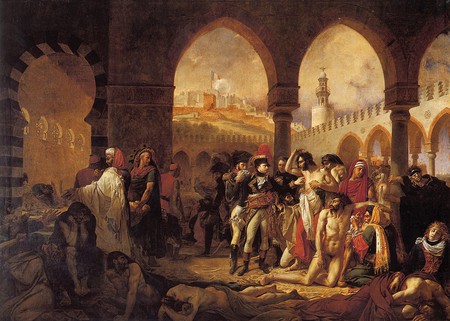 Another artist known for his keen interest in the ‘Orient’ was Horace Vernet. In addition to painting religious and literary scenes, he was very much known for his paintings depicting North Africa and the Middle East, which, like the above work, placed an emphasis on the French military in all its might. However, his Orientalist paintings also depicted scenes such as that of The Arab Tale Teller, which is a landscape with a group of men dressed in white and seated beneath a tree listening acutely to the tale-teller in the foreground. Animals can be seen in the foreground and on the right-hand side of the painting along with a woman reminiscent of the Venus de Milo on the left. If you’re in London, be sure to see this one at the Wallace Collection. 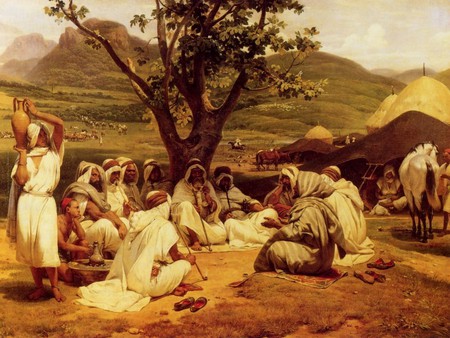 Women of Algiers in their Apartment (1834) by Eugène Delacroix

Eugène Delacroix painted two works of the same name; however, the Women of Algiers in their Apartment of 1834 is widely regarded at the artist’s first Orientalist painting and the most famous of its type. Located in the Louvre in Paris, this painting depicts three women dressed in vibrant, exotic clothing and an African woman who is dressed in non-luxurious clothing, pointing to her role as a servant. Surrounded by unique items (at the time) including a hookah and decorative fabrics, the three women sitting on the floor are washed in a golden hue. A painting of a harem, Delacroix was able to travel to ‘exotic’ places where he was able to capture this scene on canvas, showing European views of the ‘Orient’ – a place of eroticism. 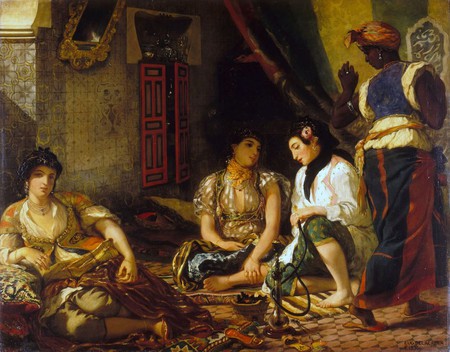 Scene in the Jewish Quarter of Constantine (1851) by Théodore Chassériau

While exploring Algeria in 1846, Théodore Chassériau came across a scene of two Jewish women and baby, which he sketched in a notebook at once so that he could paint it when he returned to Europe. Scene in the Jewish Quarter of Constantine is an oil on canvas painting that is neutral in coloring except for the vibrancy of the two women’s clothing – beautiful textiles in greens, blues, pinks, yellows and oranges. During this time, artists enjoyed painting Jewish women because, unlike their Muslim counterparts, they didn’t wear veils. See this in person at the Met in New York City. 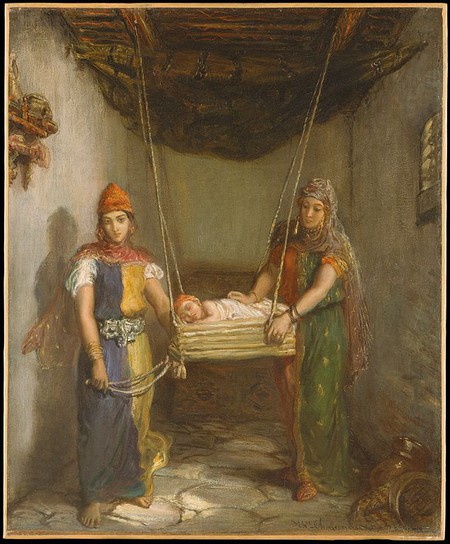 Théodore Chassériau, Scene in the Jewish Quarter of Constantine, 1851 | © Metropolitan Museum of Art/WikiCommons

It wasn’t just French artists who were producing Orientalist paintings, British artists like John Frederick Lewis, Edward Lear, and William Holman Hunt, amongst others, were also inspired by the ‘Orient.’ One of the founders of the Pre-Raphaelite Brotherhood, Hunt traveled the Middle East so that he could paint The Finding of the Savior in the Temple with ethnographical precision, with the people and culture being represented correctly. Depicting a young Jesus visiting the temple and rabbis, the vibrant painting features local people as models. A great success, the painting today is in the permanent collection of the Birmingham Museum & Art Gallery. 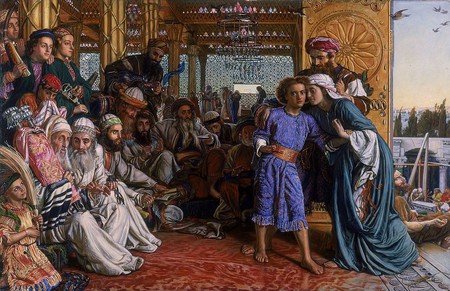 William Holman Hunt, The Finding of the Savior in the Temple, 1860 | © Birmingham Museum and Art Gallery/WikiCommons

The Turkish Bath (1863) by Jean-Auguste-Dominique Ingres 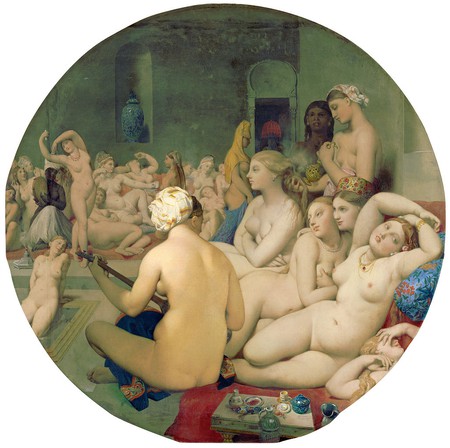 Jean- Léon Gérôme traveled to the Near East – specifically Egypt and Asia Minor – in 1868 for 12 weeks, and while he most likely didn’t paint while traveling, he most certainly saw things and met people that inspired him and his work. One such artwork is titled Bashi-Bazouk, which depicts a man who was a soldier; however, he was the type of soldier – a bashi-bazouk, meaning ‘broken-head’ – who was not paid but made a living by plundering. Outfitted in beautiful pinkish-orange silk and a colorful headpiece, he looks distinguished; however, he was a soldier that was greatly feared. This painting can be seen in person at the Met in New York City. 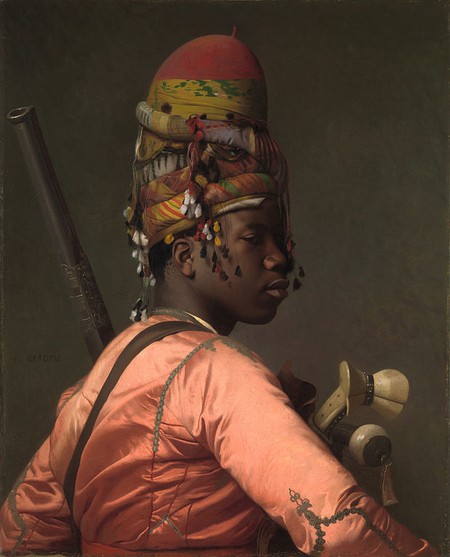 The Snake Charmer (1879) by Jean-Léon Gérôme

While Jean-Léon Gérôme did travel, he also created artworks such as The Snake Charmer, from 1879, which he completely made up in his artistic mind – even though it does look realistic. A nude young boy is holding a snake while a man next to him is playing his flute and a group of men of varying ages watch. The men are wearing colorful turbans and garb, and the room in which the scene takes place features beautiful Arabesque tiles and a stone floor. This piece is currently on display at The Clark Art Institute in Williamstown, Massachusetts.

The last of three Gérôme pieces on our list, The Bath is an excellent example of the eroticism that was often seen in Orientalist works. With a voyeuristic quality, the viewers see a nude, raven-haired women with porcelain white skin who is being washed by her African attendant who is dressed in teal, yellow and orange fabric that is slowly slipping down her chest, revealing her breasts. The bath in which they’re located is gorgeous, adorned with turquoise tiles with a purple sheen, giving them an iridescent quality. This beautiful artwork can be seen in person at the Legion of Honor in San Francisco. 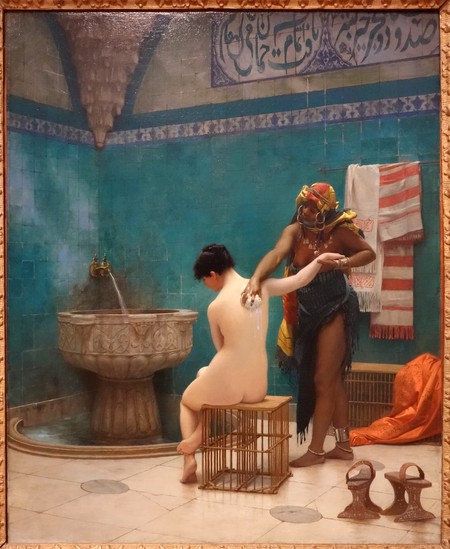 Unlike many of the painters on this list, not a lot is known about French artist Jean Discart. We know that he was born in Modena, Italy in 1856 and was first exhibited at the 1884 Paris Salon. Throughout his career, he focused on creating Orientalist artworks; indeed, he followed this theme through to the 1920s. It is believed that he did travel some, especially because many of his paintings, like L’Atelier de Poterie, Tanger, have the inscription ‘Tanger.’ In this work, Discart is painting another artist, a pottery painter who’s busy at work while his other beautifully painted pottery surround him. This painting was included in a Sotheby’s auction in 2012. 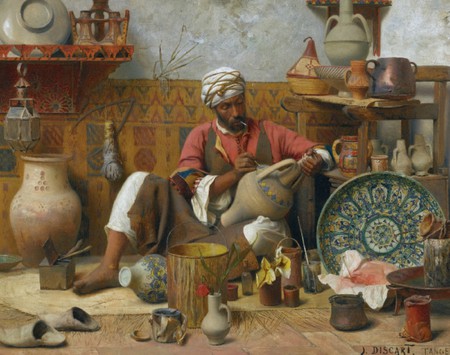