The Local Restaurants You Must Visit in Lyon 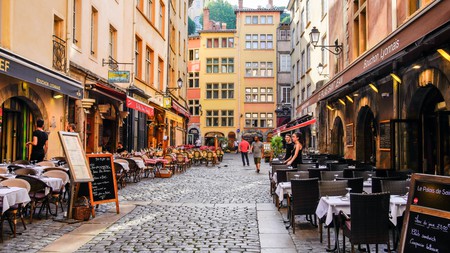 With its famed charcuterie, cheese, pink pralines and more, Lyon is a gastronome’s dream. From homey bouchons to contemporary spots serving innovative cuisine, these restaurants should be on every foodie’s bucket list. 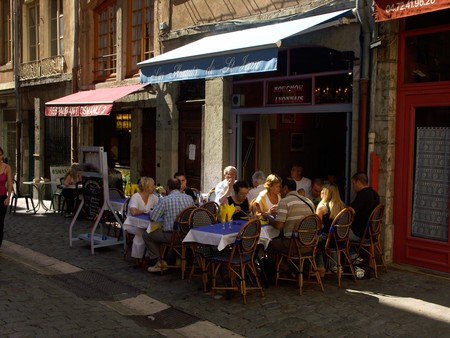 The home town of legendary chef Paul Bocuse – and the Bocuse d’Or cooking championships – Lyon is full of first-class restaurants. The most traditional of these, known as bouchons, are, in essence, the Lyonnais answer to the Parisian bistro, and are known for serving hearty food such as sausages, salade lyonnaise and pink praline tarts. About 20 are officially recognised as true bouchons, and many more sport the red gingham tablecloths and cosy atmosphere of this Lyonnais mainstay. 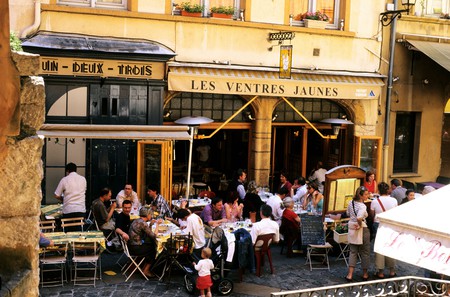 But according to owner of local cooking school Plum Lyon, Lucy Vanel, it would be a shame to assume that Lyon’s cuisine is exclusively confined to this traditional structure.

“Lyon has always attracted talent, along with the resources and logistics that come with having been a major crossroads for 2,000 years and a recognised destination for gastronomes in the last century,” explains Vanel. “Bouchons played their role in that, of course, but there also so many other factors that have played into making this city’s dining offering what it is.”

Vanel continues: “In the last 20 years that I’ve lived here, I’ve seen that Lyon’s robust resistance to passing trends, while holding good old-fashioned quality high on the list of priorities, is one of this city’s major endearing qualities.” As Vanel says, “In the end, this is what has built the foundation of Lyon as a great food city.” Culture Trip reached out to Vanel as well as France-based journalist and photographer Eileen Cho and Jean-François Mesplede, culinary journalist and former director of the Michelin guide, for their recommendations of the best restaurants in Lyon. 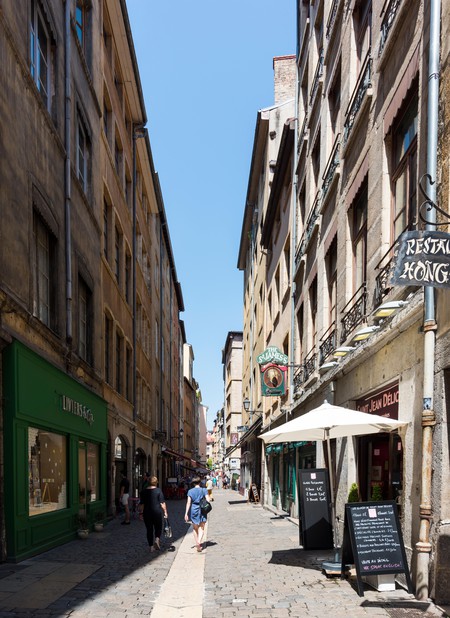 One of Vanel’s current Lyon favourites is this creative bistro in the city’s 6th arrondissement, which boasts a seasonal menu featuring innovative plays on bistro classics like foie gras with chartreuse, slow-cooked local veal and and chilled vanilla-apricot soup for dessert. As a result of the exacting natures of owner Thomas Nicolle and chef Maxime Hardy, a veteran of Lyon’s bouchons, there are only ever a handful of choices on the menu, which changes every week. A reliance on local produce and a keen attention to detail ensure that whatever you order will be delicious.

Vanel heartily recommends this French-Chinese fine-dining restaurant, which is situated not far from Lyon’s fine-arts museum. Opened by three graduates from the Paul Bocuse Institute, this restaurant may, on any given day, serve up a silky squash soup with coconut and duck hearts or wontons filled with foie gras and coriander. In stark contrast with the many meat-focussed tables of the city, fish features frequently here, though be aware that strict vegetarians or vegans may have a hard time finding something to enjoy on the Franco-Chinese fusion menu. 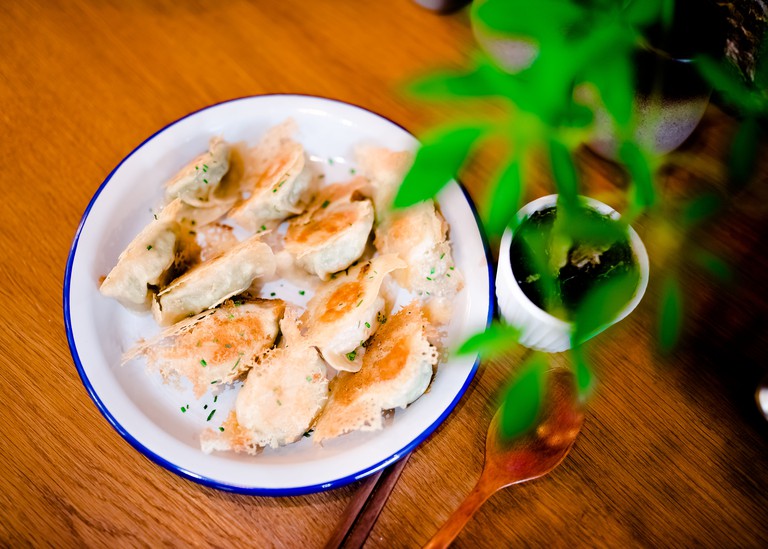 Simplicity reigns at Lady Bao, a street-food Chinese spot opened by two young women and another of Vanel’s current favourites. Lady Bao specialises in home-made jiaozi dumplings and bao, though the short menu also features heartier main dishes, to enjoy in the small dining room or to go. Everything from the dumpling dough to the fillings is made in-house, and vegetarians and vegans are likely to find more than a few choices to cater to their tastes.

Vanel loves this “proverbial old-school hole in the wall serving up good cheer and a good tête de veau [calf’s head]”. The classic menus are a steal at €23 (£19.50) for lunch and €29 (£24.50) for dinner. Each features four starters, including classic Lyonnais charcuterie, salad and terrine; a hot dish such as andouillette (French sausage), fish quenelles or pistachio-studded sausage; and a choice of cheese or dessert. Served on wooden tables with typical red gingham tablecloths, this hearty Lyonnais cuisine is sure to please anyone looking for an authentic experience.

The female owners of this contemporary play on the classic bouchon first met while waitressing at Le Café des Fédérations. They seek to deliver an authentic experience – albeit with lighter food options than most Lyonnais menus. Vanel loves this restaurant, which she describes as “slightly more rewarding intellectually” than some other more classic bouchons, “with interesting twists on a solid foundation of tradition”. The €28 (£23.70) prix fixe menu includes a selection of starters such as cold lentil salad and pickled herring, and choices for main, cheese and dessert. Natural and organic wine selections and more modern flavour combinations like a vegetarian pumpkin flan main and peanut-butter cheesecake for dessert make this restaurant stand out.

This restaurant, from Korean chef Younghoon Lee, boasts a Michelin star for its creative combination of French and Korean flavours. Praised for its delicacy by the Michelin inspector, the restaurant’s speciality is its foie gras in a soy broth, though its offerings change regularly and may include pigeon with butternut squash and chanterelles or a dessert of yuzu, white chocolate and timut pepper. A range of menus and prices – from a €35 (£29.60) lunch prix fixe to a nine-course, €105 (£88.80) culinary adventure – ensure that the refined, creative food here remains accessible to the widest cross section of diners. “The service is impeccable,” says Eileen Cho, “and experiencing French cuisine reinterpreted through Lee’s lens, with subtle Korean touch and influence, is proof enough that Lyon truly is the gastronomic capital of France.”

Restaurant, French, $$$
Facebook
Email
Twitter
Pinterest
Copy link
Share
Map View
In Lyon’s university district, chef Connie Zagora (formerly of The Ritz in Paris) and pastry chef Laurent Ozan not only serve breakfast and lunch but also manage the only “dessert bar” in Lyon. Lunch is incredibly reasonable at €23 (£19.50) for a three-course prix fixe menu; the dessert changes daily and includes baked goods such as cinnamon rolls and cakes as well as elaborate plated desserts like popcorn ice cream with buckwheat tuile and caramelised apples with verbena jus and nougatine that make any meal a special occasion. Cakes and baked goods can also be ordered in advance online. Jean-François Mesplede notes that the restaurant offers “interesting, modern, coherent” cuisine.
Open In Google Maps
34 Rue Chevreul, Lyon, Auvergne-Rhône-Alpes, 69007, France
+33603364275
Visit Website
Give us feedback

Owned by Brazilian-born, Institut Paul Bocuse-trained chef Tabata Mey and her Savoyard husband Ludovic, this convivial, 6th arrondissement spot is known for its shared plates and fusion of internationally inspired flavours. The creative menu is influenced by the seasons and may include paimpol beans with coffee and porcini mushrooms or roasted monkfish with tamarind. Complex, creative and surprising, the dishes at Les Apothicaires will not disappoint. 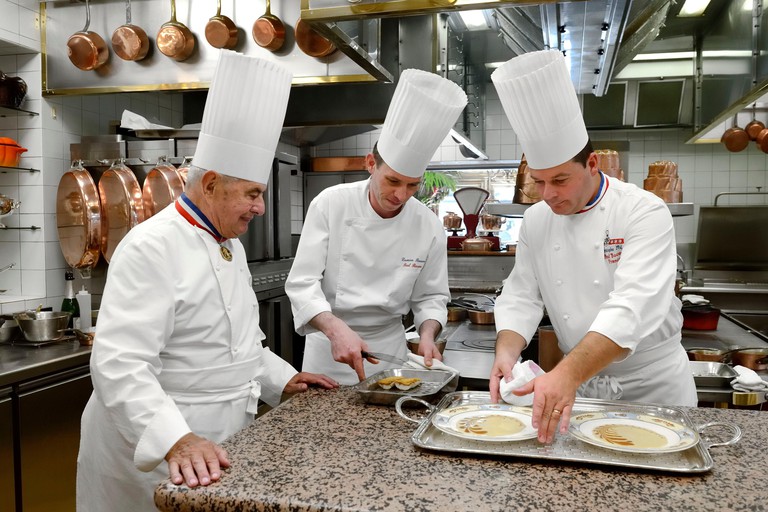 While technically located about 10 kilometres outside Lyon in Collonges-au-Mont-d’Or, this restaurant, more frequently known simply as Bocuse, remains an unmissable destination for any gastronome visiting the city. The restaurant was once helmed by Lyon’s most famous son, chef Paul Bocuse, and is famous for its black truffle soup with foie gras, rouget with potato scales and bresse hen in a pig bladder infused with truffle. Until recently, the restaurant had boasted three Michelin stars, a distinction it had held since 1965. At the end of 2019, however, it was demoted to two, a decision that Mesplede “deplores”. “L’Auberge du Pont de Collonges still represents the best of the best in terms of classic cuisine that nevertheless keeps up with the times,” he says. 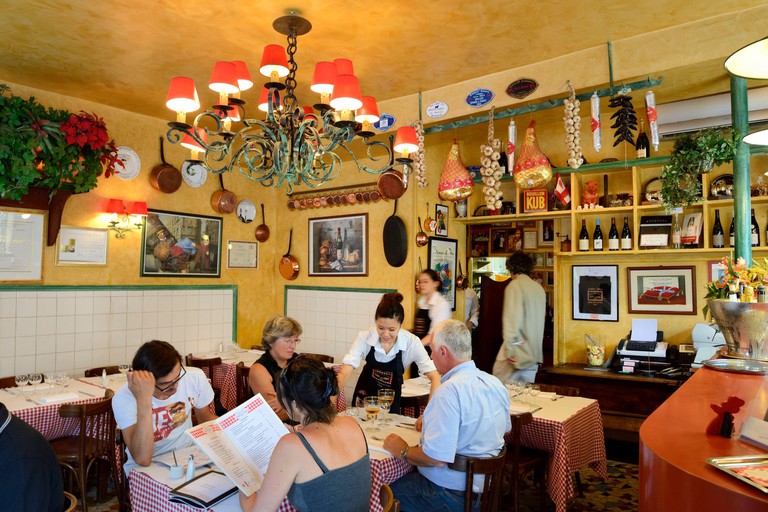 This traditional bouchon is owned and run by chef Joseph Viola, winner of the prestigious Meilleur Ouvrier de France award. With a €33 (£27.90) prix fixe menu featuring exquisite interpretations of bouchon classics such as calf’s head, lyonnaise salad and pike quenelles, this restaurant is a local favourite for good reason. Today, there are three different outposts of this bouchon throughout the city: one in Créqui, one in the Croix-Rousse district and one on rue Saint-Jean in the Presqu’île. For Mesplede, this restaurant offers the comforting, copious cuisine one hopes for at a classic bouchon.