The 8 Best Towns to Discover Impressionism in Normandy, France 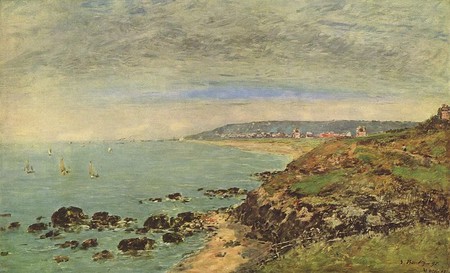 The Impressionist movement began in France during the 19th century, when a group of young artists decided to break away from traditional themes, such as religion and historical subjects, and opt instead to paint dreamy landscapes in varying light with short, thin brush strokes. Mostly from Paris, the painters needed a refuge to find the scenery they were longing to capture; so they followed the weaving Seine river to the idyllic countryside of Normandy. See the artists’ renditions in real life and discover Impressionism in these towns in Normandy.

Kicking off this list is Giverny, where perhaps the most famous artist of Impressionism, Claude Monet, had a home surrounded by his now famous gardens, as portrayed in his works, such as Le pont Japonais (The Japanese Bridge) and Nymphéas (Water Lilies). Along with strolling through the inspiring garden, visitors of the Claude Monet Foundation can tour the eclectic residence of Monet, offering a window into the life he led in this sleepy Norman town. Also worth a visit while in Giverny is the Museum of Impressionism, which features works of French neo-impressionist artist Maximilien Luce and Japanese artist Reiji Hiramatsu who, fascinated by Monet, painted his take on the Nymphéas in his piece Giverny, l’étang de Monet; bruit du vent. The museum also holds annual temporary exhibitions, which in the past have included notable painters such as Paul Signac and Pierre-Auguste Renoir. 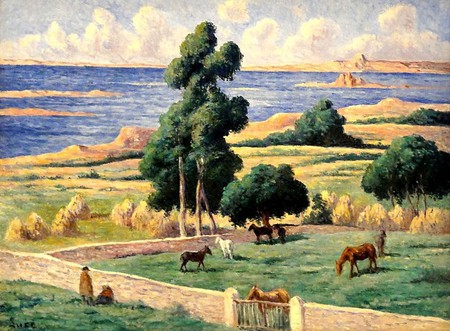 Beside Giverny is the town of Vernon, another locale frequented by Monet as seen in his work L’église de Vernon (View of the Church of Vernon). Like Giverny, Vernon also has a museum dedicated to the artists of the area and the colourful works they created. In fact, it’s the only museum in the region that houses any of Monet’s original work. Alongside Monet’s pieces are those of his step-daughter, Blanche Hoschedé-Monet, the only of his children to take interest in painting. 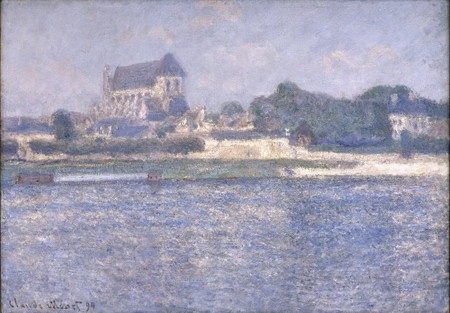 The chic resort town of Deauville has long been frequented by Parisians looking to escape to the seaside for a weekend getaway. Its neighbouring town is Trouville, separated only by a small strip of the Touques River, yet sharing the same pristine shores. Both of the town’s vast sandy beaches set the scene for artists such as Édouard Manet, Berthe Morisot and Eugène Boudin to paint the holidaying Parisian aristocrats, as seen in Boudin’s piece from 1865, Scène de plage à Trouville (Beach Scene at Trouville), which can be viewed at the National Gallery of Art in Washington, DC. 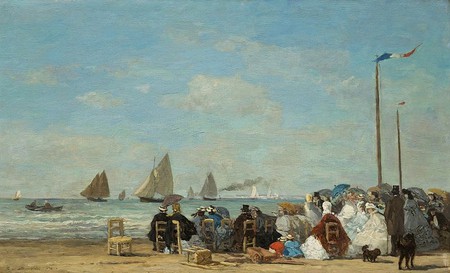 The Seine spills into the Atlantic at Honfleur, where Impressionist painters were drawn to its idyllic port. Post-impressionist artist Georges Seurat painted the harbour in 1886 in Entrée du port d’Honfleur (Entrance of the Port of Honfleur) using his signature pointillist style. Honfleur is also the birthplace of the above mentioned Eugène Boudin. A small museum, Musée Eugène Boudin, honours his legacy alongside the works of other artists who have captured Honfleur’s charm, such as Gustave Courbet and Félix Vallotton. 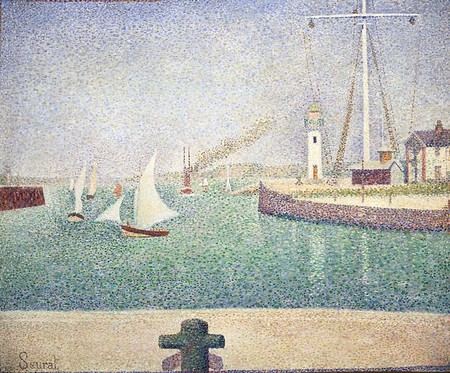 Like many artists, Seurat was enamoured with Honfleur's port as seen here is his work Entrée du port d’Honfleur | © Barnes Foundation / WikiCommons

Some say Le Havre can be attributed to where Impressionism was born when Monet, who grew up in the maritime town, set up an easel at the port during a morning sunrise and titled his end result Impression, Soleil Levant. The title alludes to the idea that the painting isn’t supposed to represent the sunrise exactly, but rather, Monet’s impression of it at that moment in time. The piece now permanently resides at the Musée Marmottan Monet in Paris and lends its name to the celebrated movement known today. Also lured by the picturesque port was Camille Pissarro, who produced his own impression of it in 1903 with The Port of Le Havre. 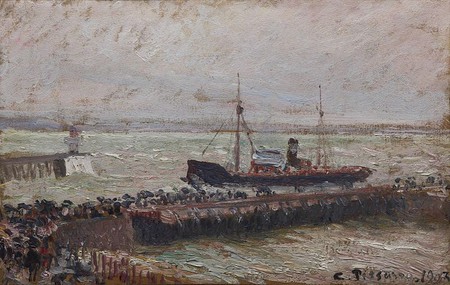 Northeast of Le Havre is the coastal town of Étretat, famed for its arch-forming chalk cliffs that rest alongside the English Channel. Monet’s Les Falaises à Étretat (The Cliffs at Étretat), which he went on to produce many times during sunset, rainy weather and from varying angles, beautifully encapsulates the raw natural beauty found among these cliffs. Visitors will see Monet’s works mounted alongside a path overlooking the rock faces, offering a comparison between the artist’s rendition and the landscape in real life. 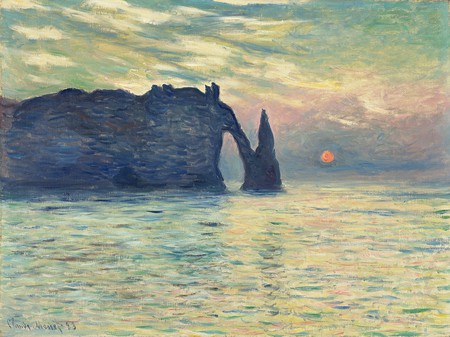 The renown arched cliffs of Étretat at sunset as portrayed by Claude Monet in his work Étretat, Soleil couchant | © Katexic Clippings Newsletter / Flickr

The capital of the Upper Normandy, Rouen was also held dear to the hearts of many Impressionists. Pissarro’s Rue de L’Epicerie illustrates the bustling Friday market of Rouen in 1898 in a series of three paintings that play with the varying effects of sunlight on the scene. The district was later destroyed during the Second World War, however, you can still wander down today’s version of the street in Old Rouen. Seen looming in the background of Pissarro’s work is the Rouen Cathedral of Notre-Dame. This Gothic structure was depicted in Monet’s series Cathédrales de Rouen where, like Pissarro, he played with light and time of day to create 30 paintings of the church, resulting in different colours and textures. 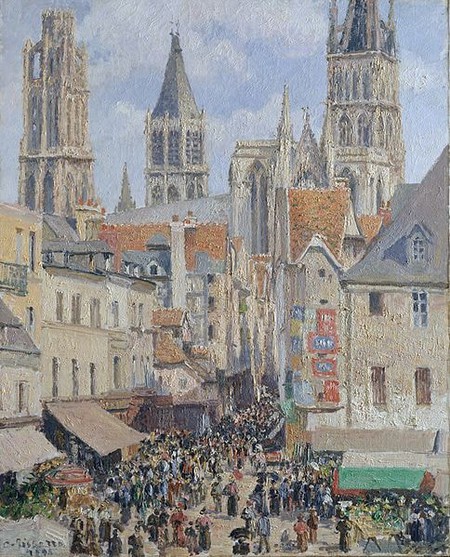 Dieppe is part of the Alabaster Coast that runs from Le Havre to the fishing town of Le Tréport (and includes Étretat in its shoreline as well). Camille Pissarro’s piece L’église Saint-Jacques à Dieppe (The Church of Saint-Jacques) represents the town’s church in the morning sun. Post-impressionist artist Paul Gauguin particularly took interest in Dieppe, having portrayed it in many of his works showcasing its port, beach and white stone cliffs. The Museum of Dieppe, housed in a medieval castle, represents the artists of Impressionism well with paintings in its collection from Pierre-Auguste Renoir and Eva Gonzalès, a student of Édouard Manet. 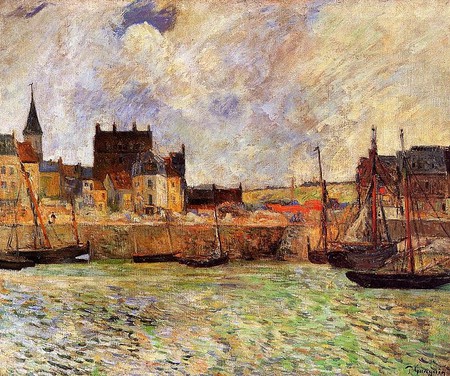