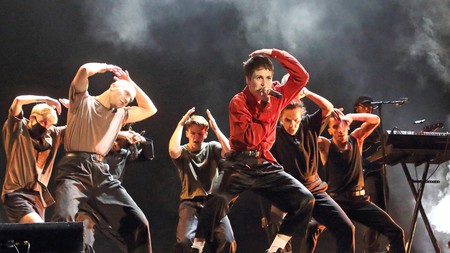 The indie music scene in France is thriving; the groups making inroads into international markets. Many of the French bands below had been around for years, touring Europe with a faithful following, before being “discovered” by English-speaking music lovers; others have garnered international recognition with their debut albums. Here, you’ll find the best French indie bands, from the award-scooping Christine and the Queens to little-known singer-songwriter AuDen.

Formed in Biarritz in 2010, La Femme are leading exponents of psych-punk rock in France. Their debut album, Psycho Tropical Berlin, earned them a Victoires de la Musique award for best debut album in February 2014, and their 2016 offering, Mystère, peaked at No 8 in the French albums chart. The lead single, Sphynx, is hypnotic (as is the music video – imagine a hardcore version of Katy Perry’s Dark Horse), and the track below, Tatiana, is a brilliant, up-tempo piece of psychedelic rock.

Formed in Versailles in 1999, Phoenix found international success with the release of their fourth album, Wolfgang Amadeus Phoenix, in February 2009. Lead single, 1901, an ode to Paris at the beginning of the 20th century, became one of the biggest hits of the summer, and tracks such as Lisztomania helped the record win the Best Alternative Music Album Grammy in January 2010. Bankrupt! followed in 2013, and the sixth studio album, Ti Amo, features an Italo-disco sound – Italophiles will know the title means “I love you”.

Christine and the Queens

Christine and the Queens is actually not a band but the stage name of multi-talented singer, songwriter and producer Héloïse Letissier. She was signed to the French indie record label Because Music in 2012, and her 2014 debut album, Chaleur Humaine, went to No 2 in the French and British album charts. The lead single, Sainte Claude, won Music Video of the Year at the Victoires de la Musique awards in 2015, where Letissier also won Female Artist of the Year. At the NME Awards in 2017, she came away with the Best International Female award and Best Track for Tilted. A year after releasing her album Chris in 2018, the artist explained that she doesn’t define herself as female (or male) but as genderqueer. Album La Vita Nuova was released in May 2020, garnering yet more critical acclaim.

Frànçois & the Atlas Mountains have put out many critically acclaimed albums since they formed in 2003, starting with The People to Forget, a collection of mostly live recordings, in 2006. This Franco-British group sing in English and French and offer a unique combination of indie pop and afrobeat genres. Two tracks to listen out for off their album Banane Bleue, released in February 2021, are The Foreigner and Tourne Autour.

Like many a little-known talent, the French singer-songwriter AuDen found mainstream attention at the Les Rencontres Trans Musicales festival in Rennes, Brittany. AuDen’s husky voice and acoustic guitar always feature prominently in his music, and his song Pour Mieux S’Unir, from 2014 album Sillon, has clocked up millions of listens on Spotify.

Hailing from the seaside town Caen in Normandy, Granville are a trio whose upbeat indie-pop is influenced by the French music of the 1960s, including Serge Gainsbourg, France Gall and Françoise Hardy. In 2013, they released their debut album, Les Voiles, from which the sweetest records are Jersey and Le Slow.

Dandies released their first self-titled EP back in 2011, and their music is inspired by the likes of the Doors, Kings of Leon and Arctic Monkeys. However, the band from Le Mans came to the attention of most English-speaking listeners when Pete Doherty appeared on the track L Comme Liaison on their 2013 debut album, Illusion et Imparfait. Since then, they have released three more EPs, including And Jojo Left the Ship, which you can listen to in full on their YouTube page. Their 2016 offering, Evocati, contains the atmospheric Artifice.

Equally deserving of a spot on our list of notable French electro bands, M83 have been around since 2001 but hit the big time in 2011 with their sixth album, Hurry Up, We’re Dreaming. It features the platinum single Midnight City, which you may know (but not admit to knowing) as the theme tune for the British reality TV show Made in Chelsea. Fans had to wait half a decade for their follow-up album, Junk – the best tracks to listen to include Do It, Try It, a throwback to 1990s electronic, and Solitude, a piano-synth ballad. DSVII followed in 2019, sounding a lot like the soundtrack to a cool, mysterious video game.

Technically, Fauve isn’t a band but a collective of musicians and videographers formed in Paris in 2010. Their performances, which have been a huge hit on the French festival scene in recent years, combine spoken word and musical accompaniment. They released the EP Blizzard in 2013, followed by their two-part album Vieux Frères in 2014, which contains an impressive 22 tracks, including Tallulah. They followed this in April 2016 with a live album.

Luke have been around on the French indie scene for more than two decades, having formed in Aquitaine in 1998. The band, known best for their live performances, has seen numerous changes in membership over this time, and the sound has evolved accordingly, though they always lean to the rock side of indie. The best song on their 2015 album, Pornographie, is the intense yet catchy J’veux être un héros; for their latest material, check out Porcelaine from 2019.

The former frontman of La Rochelle punk act Asyl, Lescop struck out on his own in 2011 with his self-titled debut album. Signed to the up-and-coming Franco-Anglo indie label Pop Noire, his revitalised cold wave tunes have a way of getting under your skin. For example, the opening track of Lescop, La Forêt, is as infectious today as it was when it was released. His long-awaited second album, Echo, doesn’t disappoint, with standout singles including David Palmer and the chillingly beautiful Echo.