Jean Nouvel is an architect of contrasts—mass and void, light and dark, traditional and contemporary. It is this embodiment of architectural juxtaposition that makes Nouvel so extraordinary. 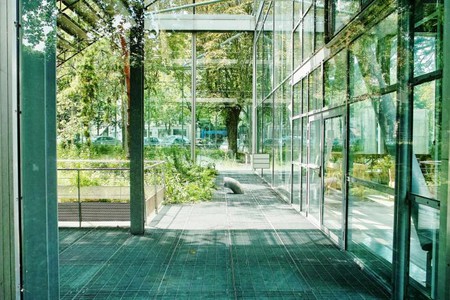 Born in 1945 in France, Nouvel went to the École des Beaux-Arts in Paris where he began to study architecture. During his student days, Nouvel earned money by working as an assistant to architect Claude Parent and Paul Virilio. Parent and Virilio were so impressed with his work, that after only one year they allowed him to work as project manager for a large apartment complex. In the following years Nouvel became partners in various architecture firms, before finally starting his own firm in 1994, Ateliers Jean Nouvel.

But before he founded his independent practice, Nouvel designed Foundation Cartier, a crystal-like glass construction that was built in 1984. It is hard to define the limits of the building, there is ambiguity or where it begins and ends. It is almost invisible, or like a mirage, a transparent façade allows the building to mingle with nature. The sky and landscape are seen in both the reflections and through the glass. Foundation Cartier is at once delicate and strong, beautiful and eloquent, as it sidles up to nature and plants itself in the midst of Paris. 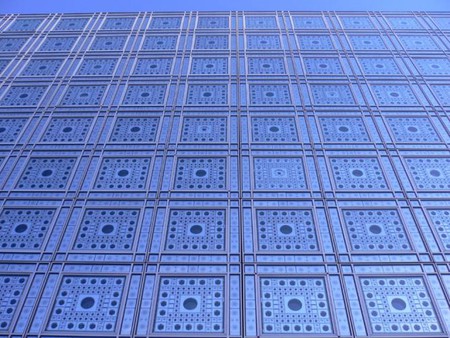 Much of Nouvel’s works came about as the result of successful competitions, and Institut Arabe is no exception. In creating Institut Arabe (1981-87), Jean Nouvel embodies a modern twist on traditional Arabic fretwork. The façade is a grid consisting of a pattern of photosensitive apertures that regulate the light inside the building, by changing shape and size as the weather changes. The building evolves throughout the day with the most dramatic transformation occurring in the evening. The internal lights glow through the lace-like façade, illuminating the pattern. At dawn nature overtakes man, the lights turn off and the effect is reversed, creating intricate silhouettes from the interior view. In Institut Arabe, Nouvel creates a dialogue between light and dark, and inside and out. The interior is a dichotomy of open areas and intimately enclosed spaces that alternately amaze and embrace as you walk through them.

In 2006, Jean Nouvel created Quai Branly, the museum of Ethnographical Art in Paris. The building takes the form of a glass bridge-like building reaching over the gardens. The gardens themselves were designed to be the opposite of French formal gardens such as the garden at the Palace of Versailles. There are no boundaries in the garden, nature is allowed to reign free over both the gardens and the walls of the building itself. The crowning glory of the building is the Green Wall, a collaboration of architect and botanist, Patrick Blanc. To create this living wall, a steel frame is constructed with a layer of felt on the side of the building. Moss and mountain plants are then embedded into the felt on the wall. The effect is otherworldly and astoundingly beautiful. Here, Nouvel succeeds in creating a unity of architecture and nature. 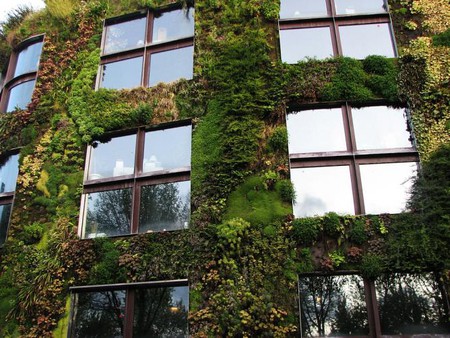 On of his most exciting works, is perhaps The Louvre in Abu Dhabi. Built on an island in the middle of the desert, The Louvre is more than just an art gallery, it is an oasis where water flows and creates tranquilly pooling around the architecture. The water itself has a cooling effect, but it is the great dome that has most effect on the temperature, providing shade in the heat of Abu Dhabi. The spaces that pierce the great dome reflect the gaps between palm leaves, a nod to the design of traditional rural buildings like Institut Arabe, the space that transforms with the setting of the sun. It is hard to believe this building is real—it’s so perfect in its quiescent, contemplative beauty, that it appears celestial.

Nouvel’s design for Vigo Port, Spain demonstrates a different style of work. Here he has created a vast monolith that penetrates the ocean. The elegant beauty and ethereal glasswork are gone. His building is reminiscent in shape of the surrounding mountainous rock formations, following their sway and jagged shape. Leading towards the metallic mountain is the pier. The pier consists of layered sheets of stone elegantly overlapping each other, reminiscent of shale. This work, although only currently theoretical, is a revealing demonstration of Nouvel’s ingenuity and how he bestows functionality with beauty.

Opening in 2015, Jean Nouvel’s Philharmonie de Paris will be a symphonic concert hall situated in the Parc de la Villette, Paris. Designed like an ocean-liner crossed with a spaceship, this building promises to be breathtaking both in its ingenuity and allure. The building aims to embrace the audience and musicians in one space, producing a candid intimacy within the vast building. In addition to hosting concerts, the building also acts as a ‘living space’ for music with rehearsal rooms, exhibition space and restaurants. Nouvel has envisioned a building that is both aesthetically and functionally graceful.

Nouvel masters the beauty in contemporary architecture by imbuing each project with a single, dominant concept. His buildings are enchanting, atmospheric, serene and powerful in a way that has not been seen since the last of the great cathedrals.