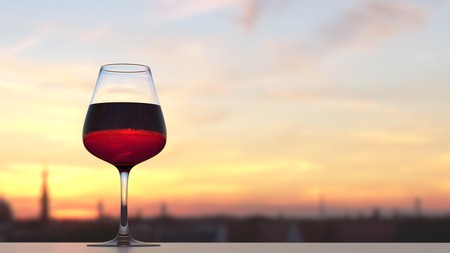 When it comes to beating the summer heat, take a cue from the French and sip a kir, the original wine-cooler cocktail.

If you weren’t of drinking age in the 1980s and don’t live in France, it’s possible you’ve never had a kir. Remedy that immediately; this is a drink you should get acquainted with. A simple mix of crème de cassis and Aligoté white wine, it’s one of the very easiest cocktails to make, and just as easy to drink during summer’s warmest days. Use sparkling wine instead of still, and you’ve made yourself a Kir Royale. Swap in raspberry liqueur in place of the crème de cassis, and you’ve got a Kir Framboise.

The drink hails from Burgundy, home to some of France’s finest wines. “It was the favorite drink of the mayor of Dijon, Canon Kir, who added the sweet cassis to balance the high acidity of the local white wine made from the Aligoté grape,” Kevin Zraly writes in the 2017 edition of his Windows on the World Complete Wine Course.

The drink was originally created during the 1900s by a waiter at the Café George in Dijon, France, and was then called the cassis blanc. It was Mayor Kir, who in mid-20th century, raised its profile by offering it during official functions in an effort to promote the local white wine and cassis liqueur made from blackcurrants.

The drink hit another peak during the 1980s, when it may have seemed a slightly fancier version of the fruity wine coolers then en vogue. Well, those wine coolers are coming back, and we’re seeing kir variations at some hot bars, too.

Might it even be fair to call the Kir Royale kind of the love child between the summer’s two big drinks trends: spritzes and a fruity, easy-drinking rosé? “It’s more like their cheeky grandma,” says Copenhagen-based bartender Nicolas Skovgaard. You’ve got bitter flavors, fruit, and bubbles in an easy-drinking, low-ABV summer sipper. What’s not to love?

In NYC, you can find them on the drinks lists at places as varied as the upscale Brandy Library and the exquisitely French Bar Tabac, to name just a couple. Coupette, one of London’s hottest new bars, has a premium take on the Kir Royale called the L’Ultime, using Mouton Rothschild “super cassis,” blackberry leaf tincture, and blanc de noirs champagne. And, of course, nearly any place in all of France should be happy to make one for you.

To make your own, simply mix Aligoté wine with crème de cassis; try a 9-to-1 ratio to start, and adjust to your taste.

And to emulate frosé, the frozen-drink trend from a couple of summers ago that’s still going strong? “Frozen kirs are the bomb,” says Zak Snyder, a bartender at Grand Banks. His recipe:

Combine all ingredients, plus a few ice cubes, in a blender. Garnish with a slice of lemon and a blackberry.