The small southern French town of Aix-en-Provence is leading the way for startups in Europe with thecamp, a campus dedicated to supporting innovation and new businesses that focus on exploring a sustainable future. With amenities including meditation areas, an open theatre, and plenty of room for campers to stay in, it’s the first European campus of its kind.

thecamp was founded in 2015 by Frédéric Chevalier, a business man originally from the Provence region. It was first inspired by American campus universities where people are encouraged to work together and feed off each other’s ideas to create their own. The project brought together a number of private and public partners to financially support the initiative, raising €34 million ($39,875,880.00).

thecamp was designed by local architect Corinne Vezzoni (& Associates) and is over 11,000 square metres (13,155.9 square yards) with buildings set in landscaped countryside outside Aix-en-Provence. The idea is that different groups of people will come, live, and work on the site for a few days or months at a time. These groups might be professionals from diverse backgrounds— engineers, scientists, coders, entrepreneurs, young creatives, and public officials—who are all working on ideas and developing functional prototypes to create a more sustainable world and improve the quality of life.

There are 170 rooms that will host professionals, students, startup creators, and experts staying anywhere from two-three days up to six months. thecamp will be open to everyone from France and overseas. It’s hoped that by spending time together in a sealed campus, people will learn from each other and build on some interesting ideas to help with some major local and global issues. thecamp will invest time on major topics such as energy, mobility, education, quality of life, and the preservation of oceans.

Some of the world’s largest companies like Accenture, AccorHotels, Cisco, and Air France are contributing money to the project. In the coming years, the idea is to train more than 200 students every year and over 2,000 international executives. 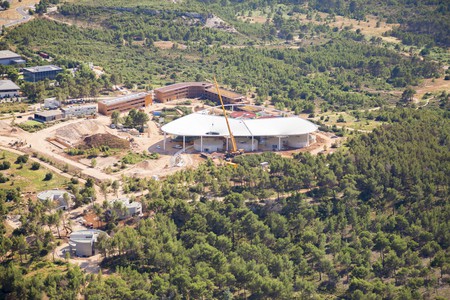 Now-President Emmanuel Macron opened the site officially in 2015 when he was Minister of Economy, Industry, and the Digital Economy. The site has been open in an operational sense since September 2016.