Following In The Steps Of Josephine Baker In France

Josephine Baker with her cheetah © epictures/ Flickr
“Black Pearl,” “Bronze Venus,” and “Jazz Cleopatra” were all nicknames given to the fabulous Josephine Baker throughout her life. Paris was an incredibly special place to the American-born singer — it was here that her explosive career first started. She famously said: “I don’t want to live without Paris… It’s my country. I want to be worthy of Paris.”

In a time when the States were not ready to accept performances like hers, Paris welcomed her with open arms. Not only is she an icon of the glamorous Jazz Age and purveyor of the hot jazz genre, but she also went on to work as a spy during the French Resistance and a nurse for refugees during the war. Here are some of the places in the city and across France that were important landmarks for her success and that can be visited today.

Baker actually decided to live in the Parisian suburb of Le Vésinet. Perhaps no mansions were big enough for her in the city centre or perhaps she just required a little space from her exuberant and hectic career.

Le Vésinet is less than a half an hour journey from Paris however, and it is here that her ‘villa’ which is called ‘Beau Chêne’ can be found, where she lived with her pet cheetah and family. The house and gardens have barely changed since the years she lived there, thanks to having been immaculately preserved in true French style, but can unfortunately only be admired from afar.

Although she may have chosen outside the city, Paris was where she worked and socialized.

This is where it really all began for Josephine Baker. It was in this theatre that she first took to the stages of the French capital, in the ‘Revue Nègre’ venture, which kickstarted her career. Wearing little more than a belt of feathers, she wowed, shocked but consistently captivated audiences with her provocative and ‘exotic’ danse sauvage. Her success was instantaneous and eruptive.

In this short clip, Baker is pictured in her performance of the Revue Nègre:

Operas and orchestral performances continue to take place at the theatre today, but nothing quite like the raunchy performances of Baker during the twenties.

Once the ‘Revue Nègre’ had come to an end in 1926, Josephine took her talents to the stage at Folies-Bergère theatre, with her new show ‘La Folie du Jour’. It was here that she first wore her iconic banana skirt and fully cemented herself as leading lady of the Jazz scene, that took Paris by storm. This re-appropriation of caricatured exoticisms proved to be a fantastic success, and in many ways represented a precursor to the literary phenomenon of the Négritude (a movement which sought to reject Western domination in all its forms). 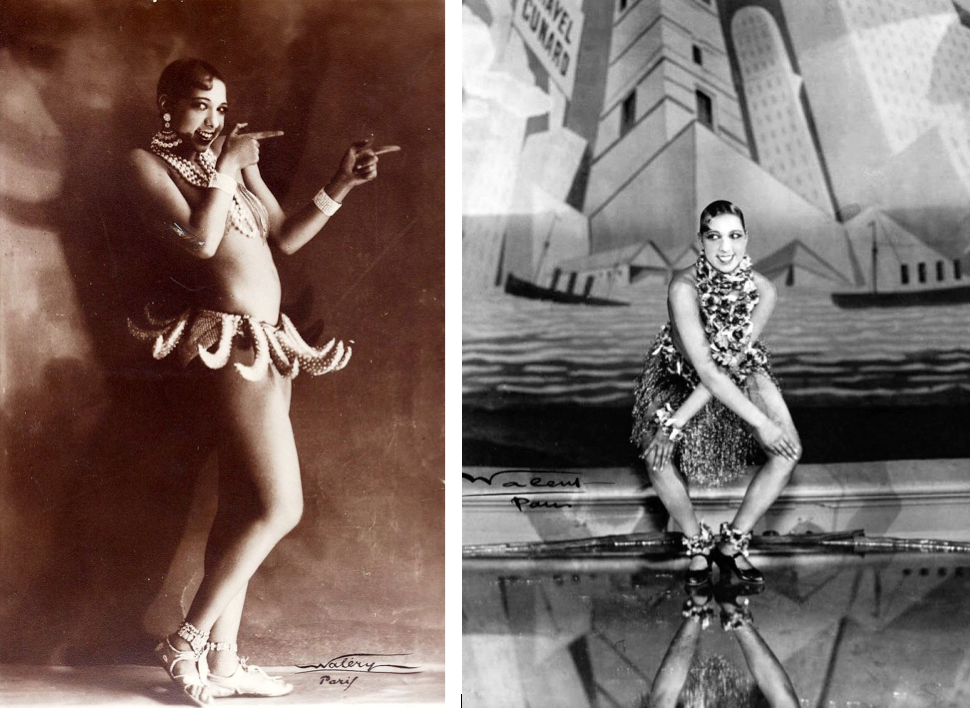 The cabaret hall still stands today, in the heart of the 9th arrondissement and shows quite a range of performances, from cabaret to children’s musicals.

Hotel
Scribe Hotel | © Reinhardhauke l WikiCommons
This hotel is most famous for having been where the Lumière brothers first showcased their cinema invention in 1895. Josephine Baker was just one of the famous names to have frequented the luxury rooms, throughout the 1950s with her family, friends and adopted children. Today, the hotel has a wall with an enormous photo of her printed onto it.
More Info
Open In Google Maps
1 Rue Scribe, Paris, 75009, France
+33144712424
View menu
Visit website
Visit Facebook page
Send an Email
Give us feedback

This restaurant was one of Josephine Baker’s favorite dining haunts. It was built in 1927, to be the biggest restaurant that Paris had ever seen and was a symbol of the flamboyance and extravagance of the Roaring Twenties and was known to be the place to find artists and performers dancing and ‘being seen’. The brasserie’s decor was inspired by the art deco movement at the time and this is reflected in its dedication to straight lines, pillars and geometric shapes, representing nature. It was named a ‘temple of Art Deco’. 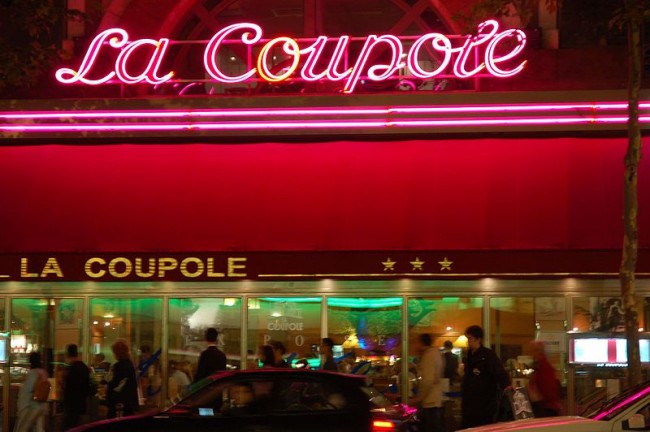 A number of artists were commissioned to paint the pillars, in keeping with the bohemian style of the area. It was artist Victor Robiquet, who painted a portrait of Ms Baker herself on one of them, in which she was surrounded by ostrich feathers.

Theater, Music Venue
On April 8th 1975, Josephine made her grand come-back performance at the Bobino Theater in Paris, shortly following an unsuccessful trip back to the USA. The audience was made up of many celebrities, including Princess Grace of Monaco. Even if America had not been ready to appreciate her, France was. At this time, she was aged 68 and yet the reviews for this performance, which was a compilation of routines from throughout her career, were some of her best ever. Listen to Baker singing about her ‘Paris Chéri’ (darling Paris):
Looks like it's closed Hours or services may be impacted due to Covid-19
More Info
Open In Google Maps
14-20 Rue de la Gaité, Paris, Île-de-France, 75014, France
+33143272424
View menu
Visit website
Visit Facebook page
Send an Email
Give us feedback

Church
Église de la Madeleine | © Shahee l WikiCommons
Sadly, a few days following this epic performance, the star died from a cerebral hemorrhage. Fittingly, her funeral was to be held in Paris, and it was at the Madeleine church in Montparnasse, where Baker had spent so much of her time. It seems only right that such a magnificent woman should have their life celebrated in such a magnificent building.Finally, so much was her popularity in Paris, there are a few places which have been named after her in more recent years…
More Info
Open In Google Maps
Place de la Madeleine, Paris, Île-de-France, 75008, France
+33144516900
View menu
Visit website
Visit Facebook page
Send an Email
Give us feedback

This square was named after Josephine Baker, in the bohemian area of Montparnasse in the year 2000. It was here that she spent so much of her time performing and socializing and it is perhaps here that she will be most fondly remembered. 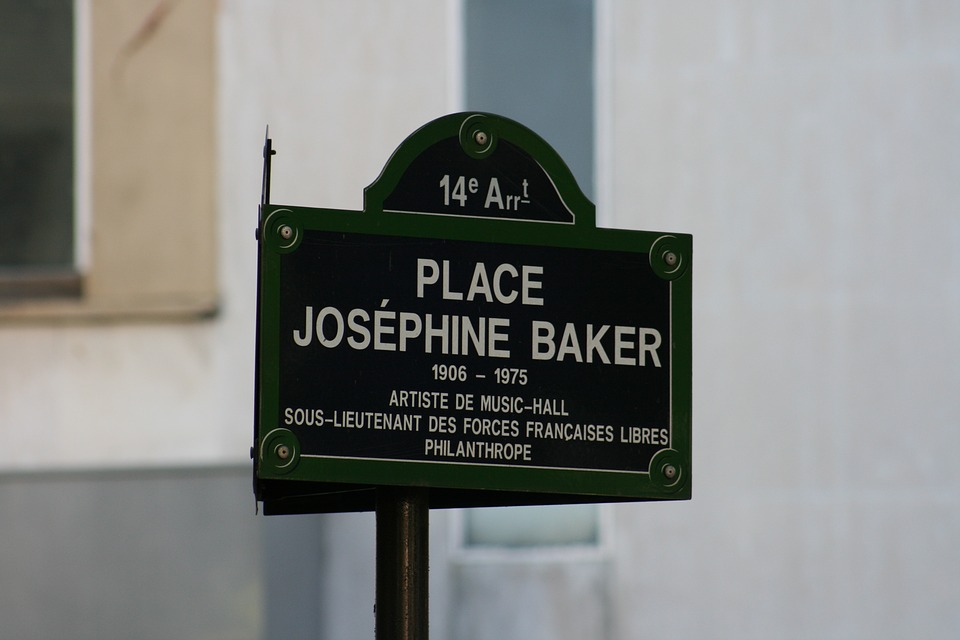 Swimming Pool
Finally, yes, there is a swimming pool named after the wonderful woman. And yes, it is suspended over the River Seine. Although it is obviously too recent to have ever been seen by Baker herself, it is a symbol of how her legacy continues to live on in Paris.However, it was not just Paris that Baker became fond of, in fact her legacy remains across the whole country.
Looks like it's closed Hours or services may be impacted due to Covid-19
More Info
Open In Google Maps
Quai François Mauriac, Paris, Île-de-France, 75013, France
+33156619650
View menu
Visit website
Visit Facebook page
Send an Email
Give us feedback

If you happen to be in the wonderful southwestern region of ‘Le Périgord’ (or “La Dordogne as you may know it), the magnificent Chateau that Baker made her home after a few years of renting it should not be missed. 14 of the rooms are open to the public and guides are available of the castle and wonderful grounds. It was here that she brought up her many adopted children, who she was known to refer to fondly as her ‘rainbow tribe’. And what a place to grow up. 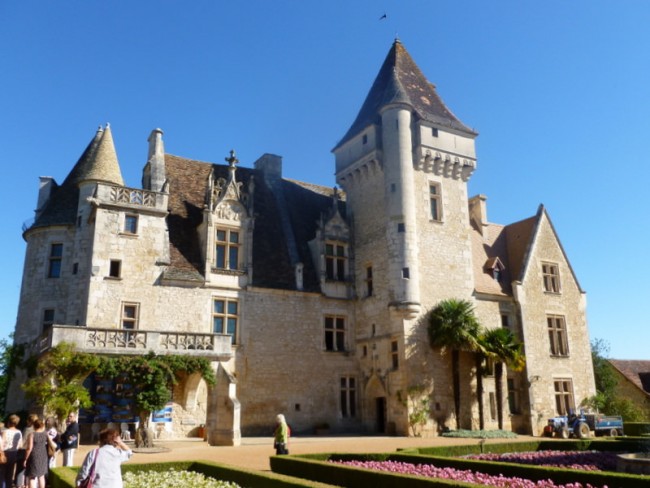 Towards the end of Baker’s life, she began to suffer enormous financial turmoil. Luckily, she had befriended Princes Grace of Monaco, who not only backed her financially, was also responsible for organising her comeback show in the Bobino Theater and gave her a home in Monaco. It was therefore at her request that Baker should be buried in the cemetery of Monaco.