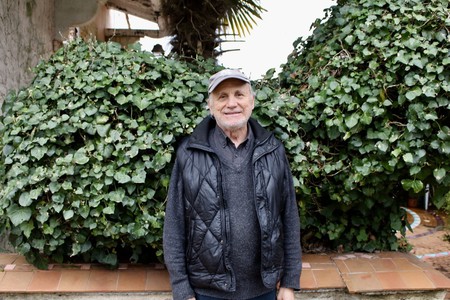 Daniel Antopolsky’s story could easily make it to films at the Sundance Film Festival or any other independent film festival. It’s the story of a musician who passed on his big break in the music industry in his 20s, but never stopped writing songs, and finally got another shot more than 40 years later. He was kind enough to welcome us into his farm in Fargues Sainte Hilaire, far away from Bordeaux’s city center, where he has peacefully lived with his family for almost 20 years to share his incredible journey.

Antopolsky’s love affair with music did not start yesterday. This music aficionado, who grew up in the south of the United States, wrote his first song when he was 12 and never looked back.

“I remember writing and playing a song for a girl I really liked,” he recalls. “She listened to it and said, ‘Thank you, it’s very nice, but I have to go to Atlanta and see my boyfriend’.”

That unpleasant experience certainly did not discourage him and he continued to play alongside other aspiring musicians who went on to become prominent figures in country music. At the time, the hippie movement was at its highest, but the environment was plagued with drug abuse.

“I guess you could say I was a hippie back then, although I was never into the drug stuff,” he explains. “The problem with any movement is that people always tend to take it to the extreme.”

After rescuing a friend from an overdose, Daniel decided that pursuing his career in music was no longer his priority and he decided it was time to leave America and explore the world.

“At 20, I felt that I was not ready for jumping into a music career and I don’t regret that choice,” he says. “A friend and I saved up some money and then decided to travel. We first went to Hawaii and the next logical step was to go to Japan. I stayed in Asia for two years and went pretty much everywhere from Koh Samui in Thailand to Turkey.”

When reflecting on his traveling days in Asia, what he remembers is during that time, he realized how all humans were connected regardless of their cultural differences or social upbringings.

“I think a lot of people go to Asia when they are in search for something meaningful, which was my case. Countries like India for instance are old, so it seems that people want to absorb the wisdom of the old civilizations,” he says. “And while I was there, I saw some people from isolated villages who looked just like some fellows I knew down south. It’s not just about the physical similarities, we as humans share the same values, but too often we are afraid to take one step toward one another and focus on external and non-meaningful things instead.”

After an enlightened trip throughout Asia, he decided to return to his home and settle for a more “traditional” life.

“When I returned to America, I decided to live a more ‘regular’ life with a job and everything,” he says. “I’m quite a disorganized person and I felt that I needed to go to the other side of the scope to find some balance.”

After years of travel in Asia and in America, settling in Fargues Sainte Hilaire, a small town about 30 minutes outside Bordeaux might seem like an odd choice for many. Not for Daniel. 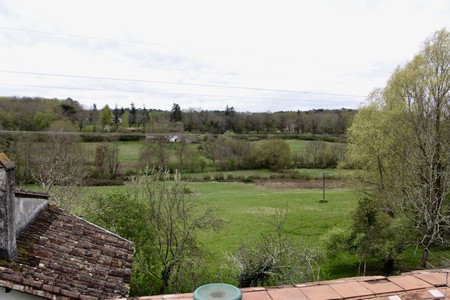 “I live in Fargues Saint Hilaire because my wife is a ‘bordelaise’,” he says. “We have bought and renovated the house in 1999. I am very happy here, it is far away from the city and very peaceful. I can have chicken and walk around the property and enjoy the silence and natural environment, which is great when you’re writing songs.”

For many years, Daniel enjoyed this peaceful life with his wife, raising their two daughters and writing songs in a room when everyone was asleep.

“This is the room in which I wrote most of my songs; it’s bit messy, so don’t pay attention,” he jokes as he shows the room. “It was not there when we bought the house. I loved to come here late at night when my wife and the girls were sleeping and that everything was getting very quiet. These are great conditions to write songs.” 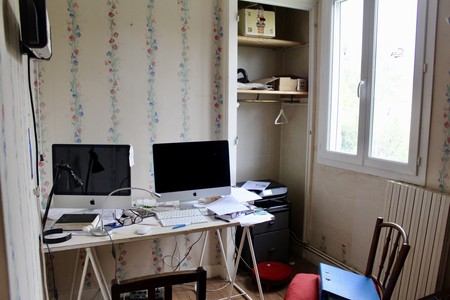 Antopolsky’s stalled musical career was about to take a turn when he met Jason Ressler, who is now his manager. Ressler recalls his encounter with Daniel.

“I was living part time in Bordeaux about eight years ago and met Daniel and his family through a mutual friend who was staying in the home I rented when I was abroad,” Ressler remembers. “I actually didn’t hear Daniel’s music for over a year after I’d met him, though I knew he played. But he always did it very privately. One day, I was visiting his farm in Fargues Saint Hilaire and he was playing in his dining room and I went to listen and thought he was incredible – like Simon and Garfunkel with a Country twinge.”

Ressler believed that Antopolsky’s talent should be recognized and tried to use his connections in the music industry to get his new friend the representation he deserved. But after facing the reluctance of music managers who were not as enthusiastic as he was, Ressler decided to jump in.

“I had no thoughts on being his manager, but just thought his music should be recorded and called a producer friend of mine in Nashville who won a Grammy, Gary Gold. But Daniel didn’t want his music just recorded, he wanted it out in the world, which is a whole different thing,” Ressler says. “But while I’d been around the music industry, I’d never worked in it and didn’t want to be a manager. I begged other managers but Daniel was 64 at the time and no one wanted to take a shot on an unknown old guy, so I started learning the ropes.”

While looking for creative ways to promote his new protégé and his unusual story, Ressler came across the movie, “Searching for Sugarman”. It was about Sixto Rodriguez, an American musician who enjoyed a revival of his music career in his home after becoming more popular than world-renowned artists such as Elvis Presley in South Africa.

“‘Searching for Sugarman’ was making waves around the time we were going to record Daniel’s first album, though I hadn’t seen it. But producer Gary Gold told me I’d better make a film if I want to get Daniel out there,” Ressler says. “British cinematographer Matthew Woolf – who is an old friend – was great enough to come on board to produce and co-direct. When I finally saw Sugarman, I realized – though it was a very different story – that Daniel is France’s American Sugarman: a lost but important musician.”

That is how the idea of directing “The Sheriff of Mars” was born.

“The Sheriff of Mars is a character I invented when I was six. Since then, I drew multiple versions of him but his principal mission was always the same: spread love and peace around the world,” Daniel explains. “The producers of the movie saw one of my drawings and thought it would be a good idea to use it as an analogy for the movie.” 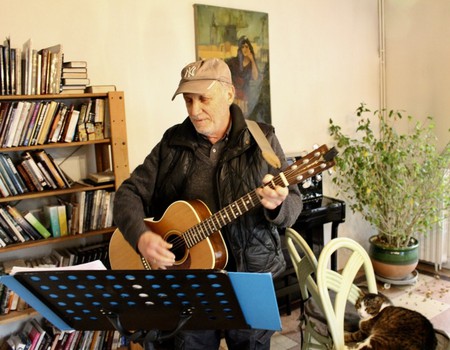 The movie is also an opportunity to explore Antopolsky’s music in depth. His style – called Americana by music experts – is a mix of country, roots folk, blues or even gospel perfectly blending together. Speaking of gospel music, he was introduced to it by “Franny boo”, Daniel’s nanny and without a doubt one of the defining people in his life.

“Franny boo was my nanny, she entered my life to help our family when I was 10 after my mother passed away, and she has been definitely one of the most important persons in my life,” he says. “Like a second mother, she gave me stability and unconditional love. I remember listening to gospel music with her and watching soap operas. Her and her husband ‘King David’ were fantastic people.”

When people think about the south in the United States during the time of Daniel’s youth, they usually have negative assumptions, which he insists on nuancing.

“People have assumptions about people from the south and how the life was back then, but when people share the type of love me and Franny shared, it beats all types of prejudice or differences,” he says. “Empathy, love and gratitude are the recurrent themes of my songs because when you think about it, what else matters but these three?”

A point his manager agrees with.

“Daniel is an incredible storyteller. He is also filled with optimism,” he says. “I love so many of Daniel’s songs, but I’ll pick two: ‘Don’t Go Pokin in the Okefenokee’, which is a great story, and ‘Rebecca’, which is a beautiful ballad.”

In all these years, Antopolsky has written over 400 songs, which could make a plethora of albums for years to come and to finally have his music out there. Yet, Daniel is a bit more measured and makes it clear that fame is not what drives him. 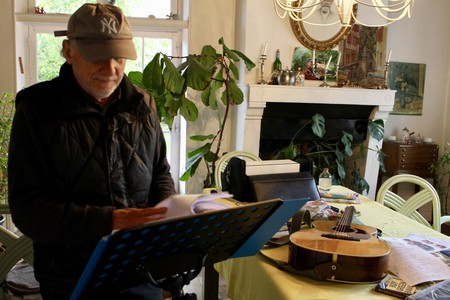 “I look at this whole second career with philosophy. I think chasing fame is foolish, and that’s not what I am interested in,” he says. “I wasn’t ready for this life when I was 20 and I am not sure if I am at almost 70. I am happy to perform in front of an audience but I don’t see myself touring all over the world. I have my family here and I don’t want to leave them. I like writing songs and I am happy with that.”

For his manager, Antopolsky’s future looks bright and he wishes many people and artists will discover his music.

“I want Daniel to record all of his beautiful songs, have others record them too, and let the whole world know that there’s this special artist out there whose music you should listen to,” Ressler concludes.

On April 30th, Antopolsky will hold a concert at the Bush Hall in London. He’ll then gear up for a busy summer, with an acoustic album of songs he recorded in the 1970s set to be released. In addition, Mark Daumail, famous for being the lead singer of the French pop-folk band Cocoon, will produce an album for Daniel this summer, which should be another exciting musical adventure.