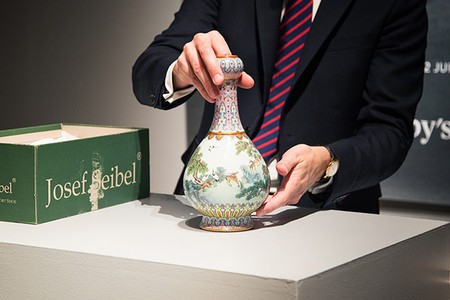 An 18th-century Chinese vase untouched for decades in an attic in France has sold at auction for €16.2 million (£14.2 million).

The vase went under the hammer at Sotheby’s Paris on Tuesday, 12 June and sold for more than 20 times its estimate. It’s the highest price ever fetched for a single item by Sotheby’s in France. 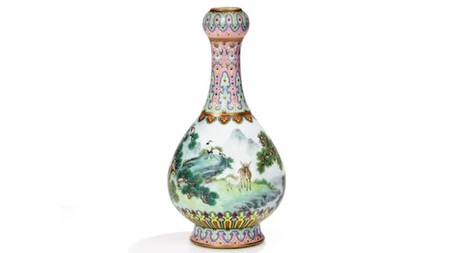 The collectable was part of an inheritance and was recently discovered stored inside a shoebox left to the great-grandparents of the seller by an uncle.

“When she put the box on my desk and we opened it, we were all stunned by the beauty of the piece. It is as if we had just discovered a Caravaggio,”says Sotheby’s Asian art expert, Olivier Valmier.

The multi-coloured vase is bulb-shaped and measures 30cm high. The “exceptionally well-preserved” piece is thought to have been made for the Qianlong emperor who ruled China from 1736 to 1795 as it bears his mark.

It depicts deer, cranes and pine trees, which are cultural symbols of health and longevity. There is also gold embroidery around the neck of the vessel.

Valmier says that the vase “is the only known example in the world bearing such detail”.

A Sotheby’s spokesperson explains that although the sellers knew the work had “some value”, they were not aware just how much it was really worth or that it was from the Qing dynasty.

The auction lasted 20 minutes as multiple bidders battled for the one-of-a-kind prize. Sotheby’s has not revealed the name or nationality of the buyer.